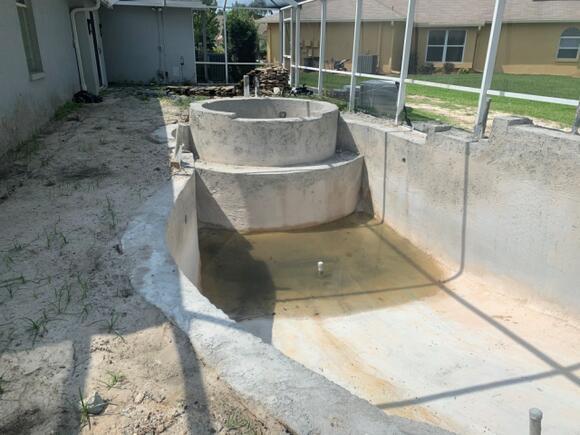 Pasco Homeowner Robin Maltenfort is one of the hundreds of Pasco homeowners stuck for months with a dirt pit in her back yard after hiring Olympus Pools in summer 2020. Robin and her husband say it cost them $25,000 to finish the job that Olympus Pools started last year.

According to permit data, Olympus Pools left about 400 projects undone when they shut down in July. Many homeowners were stuck figuring out how to finish the projects on their own.

Pasco County says it is now taking steps to ensure there is never another Olympus Pools-type scenario.

I-Team Investigator Jackie Callaway asked the county earlier this month what was being done to ensure something like what happened with Olympus Pools doesn’t happen again.

A county spokesperson responded in an email stating: “Following the issues involving Olympus Pools, Pasco is continuing this proactive approach by tasking a dedicated team to review the following:

Back in April Pasco County Deputy Building Official Anthony Mastracchio told the I-Team the county could not stop the contractor from obtaining permits. But Pasco County’s ordinance does give building officials the authority to stop the company from pulling permits under certain conditions including six-month delays in inspections.

ABC Action News asked construction attorney Jason Lambert for his take on the Pasco ordinance. “There are ways Pasco County can stop a contractor from pulling permits though usually, it requires a certain amount of time to pass with no inspections being called in on active permits,” Lambert said.

But in the case of Olympus Pools, the company often used a private third party to inspect their work, which is allowed by law.

“Typically the third parties that are hired are required to be an engineer or some other sort of independent inspection service,” Lambert said.

Those independent inspections may have kept the company off Pasco County's radar when customers began experiencing chronic delays in their projects.

Pasco County has also offered to assist Olympus Customers with switching their permits into their names or the name of another contractor.

Robin Maltenfort says she’s happy to hear about the changes even though it is too late in her case. “I think that's great,” she said. “[T]he county needs to watch these contractors to make sure they are completing projects.”

State regulators reached an agreement with Olympus Pools’ owner James Staten in July requiring that he surrender his license and pay a $1.4 million fine before applying for another contractor license. The state-approved 150 customers for reimbursement from Florida’s Construction Recovery Fund. But a cap of $150,000 for the entire Olympus Pool case will mean pennies on the dollar for many of the company’s customers.

FL to stop sending people to collections for unemployment

People who received overpayments in unemployment benefits from the state during most of last year and this year, will no longer have to worry about being sent to a collection agency.
FLORIDA STATE・1 DAY AGO
ABC Action News WFTS

"They need someone, they need that support, and we are that support for them," Iris Thurman, Director of Advocacy ECHO Brandon, said. ECHO of Brandon, Emergency Care Help Organization, is helping families in Hillsborough County that are in need of help.
HILLSBOROUGH COUNTY, FL・1 DAY AGO
ABC Action News WFTS

Hannah Glynn’s bike ride to school can be dangerous sometimes. Past experiences have taught her she must stay alert as she crosses McMullen Road in Riverview to Rodgers Middle School.
RIVERVIEW, FL・2 DAYS AGO
ABC Action News WFTS

Fire Chief: House fire in Tampa was started by a child

A house fire in Sulpher Springs was started by a child, according to the fire investigator.
TAMPA, FL・2 HOURS AGO

Hillsborough employee works his way from entry level to manager

In Hillsborough County, the manager of a wastewater treatment plant is proving it doesn’t matter where you start, but what you do with the opportunity.
HILLSBOROUGH COUNTY, FL・2 DAYS AGO
ABC Action News WFTS

The Florida Department of Transportation is ahead of schedule in completing a project in Brandon designed to improve safety and make traffic flow better between three major arteries: State Road 60, I-75 and the Selmon Expressway.
BRANDON, FL・1 DAY AGO
ABC Action News WFTS

The Hillsborough County Sheriff’s Office is hoping to entice people around the country to come work for them. They say the need is significant.
FLORIDA STATE・2 DAYS AGO
ABC Action News WFTS

It's a Good Morning to be in Brandon

Brandon is one of the largest unincorporated cities in the whole country — and it continues to grow. Every single day there's growth in this area from new businesses to new housing developments.
BRANDON, FL・1 DAY AGO
ABC Action News WFTS

Bankruptcy by Olympus Pools owner could impact hundreds of customers

The I-team investigates a legal maneuver that could affect hundreds of consumers who paid for pools that were never completed. Investigator Jackie Callaway reveals the details from the Olympus pool owner's multi-million dollar bankruptcy.
ECONOMY・1 DAY AGO
ABC Action News WFTS

An economist from Zillow.com tells ABC Action News if you're paying more than 30% of your income toward rent, it’s too much.
TAMPA, FL・2 DAYS AGO

There’s a gaping hole in how police report and track missing people. The result is a hodgepodge of databases that can be problematic and out of date experts say. Investigative Reporter Katie LaGrone uncovers a solution Florida has yet to adopt fully.
LAW ENFORCEMENT・2 DAYS AGO
ABC Action News WFTS

Over $9 million given to Winter Haven for road improvements

It’s an empty lot in West Tampa now, but in the future, Councilman Joseph Citro imagines something very different for the 18-acre property west of the Hillsborough River on North Rome Avenue.
TAMPA, FL・3 DAYS AGO
ABC Action News WFTS

Florida man jumps into a river to avoid arrest

A Florida man was arrested Wednesday after a car chase and a short swim in the Intracoastal waterway.
2 DAYS AGO

For the last year and a half, Hannah Bodenhorn worked as a student intern counselor at Sunrise of Pasco County. Bodenhorn said her time at the shelter was rewarding and she didn’t realize how passionate she would be about it.
PASCO COUNTY, FL・2 DAYS AGO
ABC Action News WFTS

Work is underway to overhaul the sewage system in St. Pete Beach, lifting a moratorium on construction and allowing new hotels to build or expand in the beach community.
SAINT PETE BEACH, FL・4 DAYS AGO
ABC Action News WFTS

Jim Caramello's phone rings daily, and many times when he answers, he hears a similar story: a renter's landlord is increasing rent to a rate the renter can no longer afford. Caramello, the Real Estate Director for the University Area Community Development Corporation —a 501(c)(3) public/private partnership that seeks to establish more affordable housing in the neighborhoods around the University of South Florida — said the demand for affordable housing is overwhelming to the point it far exceeds a very limited supply.
HILLSBOROUGH COUNTY, FL・5 DAYS AGO
ABC Action News WFTS

The Hillsborough County School district has just launched a new learning program that connects students who have to quarantine due to COVID-19 with a live teacher to keep them from falling behind in class.
HILLSBOROUGH COUNTY, FL・4 DAYS AGO