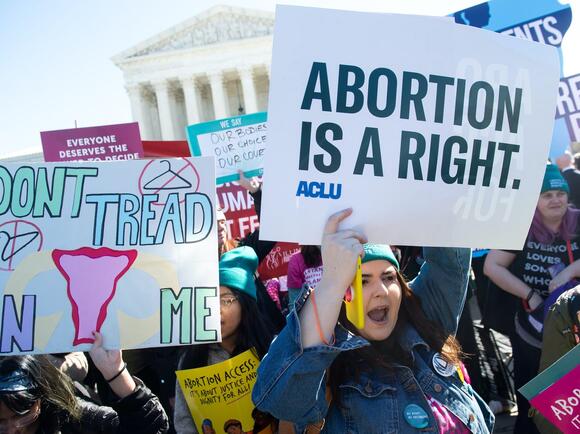 A federal judge on Wednesday set a hearing date for next month to review the Biden administration's request to block a Texas law that bans nearly all abortions in the state.

US District Judge Robert Pitman will consider the Department of Justice's request for a temporary restraining order or preliminary injunction to the Texas law on October 1.

The DOJ filed the emergency motion late Tuesday, asking the judge to block Senate Bill 8, a Texas statute that prohibits abortions after six weeks of pregnancy, a time before many people know they are pregnant, with no exceptions for rape or incest.

The legal action came after the Supreme Court in a 5-4 vote on September 2 kept the Texas law in place, 24 hours after it went into effect. The court's narrow majority argued the decision was technical and the justices did not rule on the constitutionality of the law, which could still be legally challenged.

Pro-abortion groups and politicians, including President Joe Biden, were outraged by the decision. The DOJ last week sued the state of Texas over its new law which it says is "clearly unconstitutional under longstanding Supreme Court precedent," Attorney General Merrick Garland said.

The Texas law has withstood legal action thus far because of the unique way it has been designed. The law invites private citizens, rather than state officials, to enforce the ban. That means a private citizen can sue an abortion provider, doctor or an Uber driver taking a patient to an abortion clinic. Successful lawsuits will be rewarded up to $10,000, in addition to legal fees.

Did Biden Exempt Congress From the COVID-19 Vaccine Mandate?

The COVID-19 virus is to blame for the deaths of 4,887,600 across the globe as of Oct. 18, 2021, reports the World Health Organization (WHO). With the global crisis far from over, the Biden administration has taken measures to curb the spread of the virus by issuing an executive order that calls for a COVID-19 vaccine mandate. Is Congress exempt from this vaccine mandate?
CONGRESS & COURTS・18 HOURS AGO
Reuters

WASHINGTON, Oct 18 (Reuters) - The U.S. congressional committee investigating the deadly Jan. 6 attack on the Capitol said on Monday that it rejected Steve Bannon's arguments for failing to cooperate with the probe, as the panel pursues a contempt of Congress charge against the long-time adviser to former President Donald Trump.
CONGRESS & COURTS・6 HOURS AGO
Business Insider

More evidence emerges that Attorney General Merrick Garland has allowed the Department of Justice to become outrageously politicized on behalf of liberal interests. Indeed, the nation’s chief law enforcement officer is breaking the law. Nine months into the Biden presidency, Garland has yet to comply with a perfectly legitimate order...
U.S. POLITICS・1 DAY AGO

"You'd have to be a fool to think this isn't happening," Republican Thomas Massie wrote in a tweet.
U.S. POLITICS・9 HOURS AGO
WPRI 12 News

The Biden administration is asking the Supreme Court to block the Texas law banning most abortions, while the fight over the measure’s constitutionality plays out in the courts.
TEXAS STATE・14 HOURS AGO
Business Insider

Progressives have grown frustrated with Arizona Sen. Sinema, who has made headlines in recent months for posing roadblocks to Biden's agenda.
CONGRESS & COURTS・2 DAYS AGO
CNBC

Former President Donald Trump filed a lawsuit seeking to block White House records from his tenure there being obtained by the congressional committee investigating the Jan. 6 Capitol riot by Trump supporters. The suit accuses the select committee and its chairman, Rep. Bennie Thompson, of harassing Trump and senior members...
POTUS・11 HOURS AGO

EXPLAINER: How lawmakers are investigating the Jan. 6 riot

The House committee tasked with investigating the deadly Jan. 6 riot at the U.S. Capitol has been ramping up its efforts in recent weeks, issuing subpoenas to nearly 20 individuals, including four of former President Donald Trump s advisers and associates.Lawmakers on the committee have made clear that they want to move quickly to obtain testimony and documents related to the attack. One witness summoned to testify, former Trump White House adviser Steve Bannon is facing a criminal contempt referral after defying the panel's subpoena. Here's a deeper look at the committee, its mission and how it operates:WHY...
PROTESTS・2 HOURS AGO
WashingtonExaminer

Federal Communications Commission acting Chairwoman Jessica Rosenworcel is not expected to be nominated by President Joe Biden to serve in the role on a permanent basis, people familiar with the matter said, because she is not liberal enough for the administration.
PRESIDENTIAL ELECTION・1 DAY AGO
FOX 13 News

Utah, other states ask court to side with Texas in abortion lawsuit

Utah Attorney General Sean Reyes has signed the state on to a "friend of the court" brief in support of Texas in a lawsuit over its controversial abortion law.
UTAH STATE・1 DAY AGO
Daily Mail

President Biden's bipartisan commission studying potential ways to change the Supreme Court lost two of its conservative members on Friday, even as it remained split on the idea of court packing. Caleb Nelson, a law professor at the University of Virginia who clerked for Justice Clarence Thomas, and Jack Goldsmith,...
CONGRESS & COURTS・3 DAYS AGO

The Biden administration announced on Friday it would ask the Supreme Court to throw out a Texas law that bans almost all abortions after a federal appeals panel allowed the restrictions to stay in place. Texas clinics are running out of options as they try to beat a ban on...
CONGRESS & COURTS・3 DAYS AGO
Slate

A federal appeals court is once again allowing Texas to continue banning most abortions.
TEXAS STATE・2 DAYS AGO
HuffingtonPost

Democratic lawmakers on Friday trashed a draft report released by President Joe Biden’s recently formed Presidential Commission on the Supreme Court, saying its findings fall short of the kinds of reforms needed to restore integrity to the court. “This report is a disappointment to anyone who’d hoped for a hard-hitting...
PRESIDENTIAL ELECTION・3 DAYS AGO

WASHINGTON, Oct 15 (Reuters) - U.S. President Joe Biden said on Friday the U.S. Justice Department should prosecute people who defy subpoenas to testify before a congressional select committee probing the deadly Jan. 6 assault on the Capitol. "I hope that the committee goes after them and holds them accountable,"...
CONGRESS & COURTS・3 DAYS AGO
Reuters

Liberal Justice Sonia Sotomayor said that the Supreme Court had implemented a new system of oral arguments because the men were talking over the women too much. During virtual oral arguments of the pandemic, the high court implemented a system where justices were each given a turn to ask questions in order of seniority. Before that, justices asked questions in a free-for-all.
CONGRESS & COURTS・4 DAYS AGO
Business Insider

The Biden administration, despite halting federal executions, has asked the Supreme Court to reinstate the bomber's death sentence.
CONGRESS & COURTS・5 DAYS AGO