By Natasha Decker
MadameNoire
29 days ago 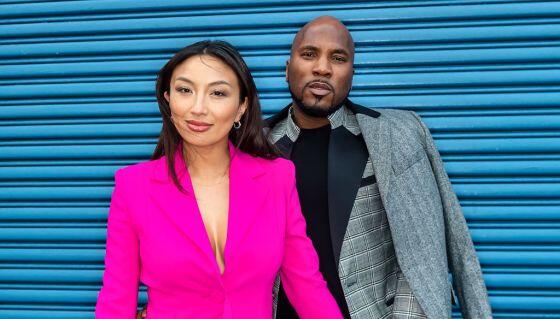 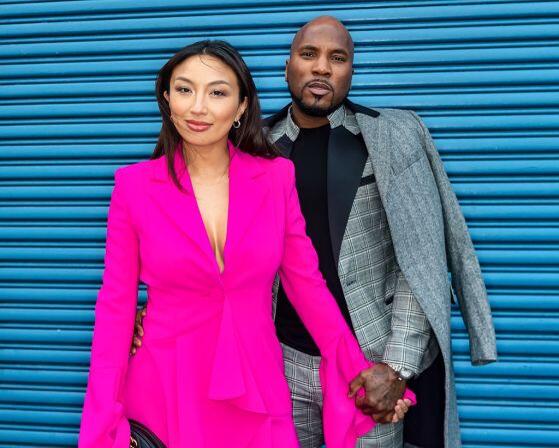 Rumors are swirling that Jeannie Mai and Jeezy are expecting their first child together. While the news hasn’t been confirmed, Jeannie’s former co-host on The Real , Tamar Braxton , recently weighed in on all the speculation.

The rumors stem from photos taken of the married couple during this year’s New York Fashion Week. When she wasn’t wearing baggy clothes or strategically photographed while holding a purse in front of her stomach, fan seem to think Jeannie was rocking a subtle baby bump in some of her NYFW photos.

As seen in a screenshot grabbed by @whisperswithbella, Braxton was one of the many to join in on the speculation. Underneath a photo of Jeannie and Jeezy, the “Love and War” singer wrote, “Y’all are pregnant for sure, love to see it.”

Jeannie and Jeezy started dating at the end of 2018 after meeting on The Real’s set. They went public with their relationship in August 2019, and the rapper popped the question in March 2020. The two ended up have an intimate wedding at their Atlanta home earlier this year .

RELATED CONTENT: “Why Jeannie Mai Didn’t Invite ‘The Real’ Co-Hosts To Her Wedding”

Jennie was previously married to Freddy Harteis for 14 years. During their marriage, she was open about not ever wanting to have children, despite Hartesis’s desire to be a father. The two separated in October 2017. According to PEOPLE , the star told her co-hosts on The Real in 2018 that not wanting to be a mother had been a factor in her divorce .

“When you physically see how a man is with a child, and if the man really desires to be a father, and you know that you are that block between that happening, you just don’t feel right about yourself every single day,” Jeannie explained then.

All things said and done, sometimes things change when the right person comes along . Maybe for Jeannie, that person was Jeezy.

RELATED CONTENT: “Change Of Heart? Jeannie Mai Reveals Pictures Of Gabrielle Union’s Daughter Does Something To Her Uterus”

See some of the speculative tweets about the co-host’s possible baby bump down below.

Tamar Braxton decided to walk away from WE tv. “Braxton Family Values” fans wondered what would happen to the show after so much controversy occurred while the family filmed the recent season. Tamar Braxton took issue with how things were being handled behind the scenes. And she began to blame the tension between family members on producers. After a suicide attempt, WE tv released her from her contract. At the time, Tamar was clashing something serious with Traci Braxton. At Trina Braxton’s wedding, the sisters got into it. Tamar said that things became violent and she accused Traci of assaulting her. However, she’s back on good terms with Traci. She even issued a public apology to her big sister.
TV & VIDEOS・9 DAYS AGO
MadameNoire

Viral hitmaker Yung Baby Tate was bombarded with hateful comments about her body after a few pictures surfaced from her performance at Afro Punk in Atlanta last month. The star hit the stage in a matching leopard suit ensemble that exposed all of her curvaceous assets, but social media watchdogs weren’t too happy with the “I Am” singer for showing off her body. One person even advised Yung Baby Tate to “lose 10 pounds” and called her out for being “out of shape,” according to REVOLT.
THEATER & DANCE・11 DAYS AGO
nickiswift.com

Is Tamar Braxton Ready To Return To TV?

It seems that Tamar Braxton's longtime reign on reality TV is a mixture of both "Love and War." Tamar was an executive producer for three reality TV shows: "Tamar Braxton, Get Ya Life!", "Braxton Family Values," and "Tamar & Vince." According to IMDb, Tamar was also a cast member of numerous reality shows, and she has made it clear before that she is not afraid to tell her truth about working on those sets.
TV SHOWS・8 DAYS AGO
thesource.com

Jeannie Mai revealed she and Jeezy were expecting on her show The Real and spoke at length in Women’s Health Magazine last month. “Jeezy and I have been kind of saving this and hiding this for five months. So, we’re relieved to finally share the news.”. “I can’t believe how...
CELEBRITIES・4 DAYS AGO

Jeannie Mai Jenkins is catching fans up on her pregnancy journey thus far. The Real co-host, 42, and husband Jeezy announced last month that they are expecting their first baby together after experiencing a chemical pregnancy earlier this year. In a new video on her Hello Hunnay with Jeannie Mai YouTube channel, the mom-to-be gives fans a play-by-play up to this point in her pregnancy.
WOMEN'S HEALTH・7 DAYS AGO
Bossip

Now five months along, the 42-year-old reveals that she started in vitro fertilization (IVF) shots on her wedding day back in March.
CELEBRITIES・5 DAYS AGO
laconiadailysun.com

Jeannie Mai started IVF on day of her wedding

Jeannie Mai and Jeezy started IVF the day of their wedding. The 42-year-old TV star and her spouse - who tied the knot on March 27 this year - are currently expecting their first child and managed to conceive naturally in the end, after suffering a devastating miscarriage, and Jeannie has revealed the moment they found out their happy news.
RELATIONSHIPS・6 DAYS AGO
thesource.com

The 42-year-old TV star Jeannie Mai Jenkins and rapper Jeezy are currently expecting their first child and managed to conceive naturally after 2 weeks of IVF treatments. The Real star also shared that she suffered a miscarriage and still experienced pregancy symptoms. In a new video on her YouTube series...
CELEBRITIES・5 DAYS AGO

In a new episode of 'Hello Hunnay with Jeannie Mai', Jeannie, who was molested by a male family member when she was young, reveals that the trauma makes her doubt herself, wondering if she's meant to be a mother. AceShowbiz - Jeannie Mai is opening up in a new video...
FAMILY RELATIONSHIPS・8 HOURS AGO
rnbcincy.com

Tamar Braxton: Says She Might Make A Come Back To Reality TV

LISTEN LIVE. LIKE US ON FACEBOOK. FOLLOW US ON TWITTER. Tamar Braxton said that she could come back to reality tv. When asked what was up with the rumors that her family’s show Braxton Family Values was coming back, the singer played coy but let a few key details slip. “Recently you said, ‘hey what if I was to tell you Braxton Family Values was coming back?’” pushed the cameraman.
CELEBRITIES・7 DAYS AGO
ABC News

Jeannie Mai is opening up on changing her mind about motherhood after announcing her pregnancy last month. In a new episode of her Hello Hunnay YouTube channel, Mai explained more about why she previously did not want to have children and how her relationship with husband Jeezy altered her mindset.
CELEBRITIES・17 HOURS AGO
femalefirst.co.uk

While it’s no surprise that Jeannie Mai is pregnant with her first child with her husband, Jeezy, the actress-turned-The Real host is still pretty shocked. In a new episode of her Hello Hunnay YouTube channel, Mai explained that she never pictured herself being in a baby way. “If you took...
CELEBRITIES・1 DAY AGO
thepeachreview.com

Get lost in the music with the famed R&B artists as NSUC Entertainment and Ideal Touring presents the Celebration Festival, which kicks off on Saturday, Dec. 4 at the award-winning State Farm Arena. Renowned R&B artists Tamar Braxton, Keith Sweat, Sheila E and Stokley are kicking off the first night...
MUSIC・1 DAY AGO
nowdecatur.com

SZA DENIES RELEASING NEW ALBUM ON THE SAME DAY AS SUMMER WALKER: SZA has denied rumors that she is planning to release her album on the same day that Summer Walker is releasing her sophomore album 'Still Over It.' SZA tweeted, “I jus wanna know y y’all think i would drop same time as summer and I’m ON her album loudly crying emoji like wut.” No word on when SZA is releasing her album.
MUSIC・4 DAYS AGO
Hello Magazine

Sarah Jessica Parker has paid a heartfelt tribute to her late friend and colleague following his devastating death. The Sex and the City star said she was "utterly devastated" as she revealed the passing of George Malkemus, the co-founder of SJP Shoes. The actress wrote: "George D.Malkemus lll. February 23rd,...
CELEBRITIES・26 DAYS AGO

So many stars look forward to the day when they land their first Met Gala invite. But Lourdes Leon admits that the star-studded bash wasn't as fun as she expected. Madonna's 24-year-old daughter Leon made her Met Gala debut (with her unshaven armpit visible!) last month but in a new Interview Magazine cover story, she said the party itself just wasn't her "vibe."
CELEBRITIES・1 DAY AGO
Hello Magazine

Madonna's son David Banda turned 16 this weekend and the singer pulled out all the stops to make it a day to remember. Taking to Instagram on Monday night, the Like a Virgin star shared several pictures from the celebrations and revealed they had marked the day in their new house.
CELEBRITIES・18 DAYS AGO
asapland.com

You must be shocked to see that Popular Singer Eminem’s Daughter Hailie Mathers is Twin of her Father. You can have a look at her new Instagram Photo in which they both are together. Hailie Mathers does resemble her 46-year-old Daddy. Her latest selfie looks so Uncanny with “Lose Yourself”...
BEAUTY & FASHION・10 DAYS AGO
Outsider.com

The Conners revealed in 2018 that Roseanne died from an accidental overdose of painkillers. But last night, the popular ABC sitcom gave audiences a look at how the character tried to handle her addiction to opioids. Darlene found a note her mom wrote in the margins of a Bible in...
CELEBRITIES・15 DAYS AGO