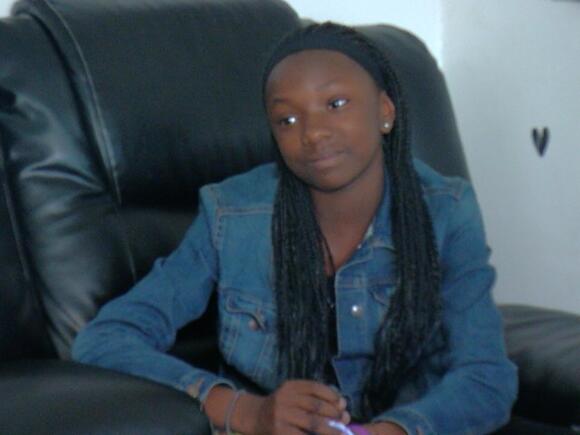 A dramatic situation unfolded onboard a school bus in Buffalo Thursday morning.

It happened at the corner of East Delavan and William Gaiter Parkway.

A 12-year-old student took a heroic step to prevent the bus from crashing.

“What made you think to react so quickly the way you did?” Buckley asked.

"To save my life and to save my little sibling's life and I was like I’ve gotta save snap out of it — I’ve got to save everybody's life,” responded Aniyah McCrayer, 12.

McCrayer should be considered a hero.

“And then I hear somebody say — the bus driver fell — she passed out,” recalls McCrayer.

That's when this 7th grader from King Center Charter School jumped into action, remembering how students are taught to respond to an emergency button.

“Seen a button that says stop. I stopped it, then I went up to the front and I seen the brake, so I pushed the brake and that stopped it,” described McCrayer.

“The bus was up on the curb and right before a pole that it would have hit had she not stopped the bus,” explained Eric Heard, her father.

Heard says his daughter called him during the emergency, and her actions stopped the bus from crashing.

“I received a phone call from her while she was on the bus,” explained Heard.

“We were just on the curb, about to hit a street light,” McCrayer described.

She said when she hit the break, it was a jarring halt for the students on the bus.

The girl’s brother, Rayshawn Heard, 8, a third-grade student, was also on the bus with a few other King Charter Students.

He pushed open the emergency doors.

“And we just shook and we were scared,” responded McCrayer.

When Buffalo Fire responded just before 7:40 a.m. Thursday, the bus was on the side of the street with an unresponsive driver on the bus floor.

Rescuers had to force their way into the bus to remove the driver, for firefighters to perform life-saving measures at the scene.

“She was on the floor,” McCrayer recalled. “I’m just like — oh my God what just happened — I’m traumatized.”

The driver was taken to ECMC. Due to privacy issues, we do not have information on the driver’s condition. In a statement, First Student wrote:

Our driver is a long-term and experienced employee with a strong driving record. Our thoughts and prayers are with her and her family as she receives medical care. We’re happy that there were no injuries to students. The incident is currently under internal review.

Heard said it was a very chaotic scene when he arrived.

“It was horrific,” expressed Heard.

McCrayer says she was too shook up to go on to school.

For students who were later transported to school, including her brother, a school counselor and nurse were on hand to help them with any mental health issues they may have had from their experience.

“It’s kind of like scary. I don't want to get on the bus no more,” replied McCrayer.

The children's father couldn't be more proud of his kids.

“Words can't express it — I believe she was very heroic as well as my eight-year-old son for, you know, for opening up the emergency doors — allowing the kids to get off the bus safely, so I'm a very, very proud dad right now,” reflected Heard.

Heard said he believes there should be school aides on buses, but realizes school districts are facing a national bus driver shortages.

“Just for the safety of the kids,” remarked Heard

I'm so glad everyone is ignoring the dumb comments on here. BEAUTIFUL JOB TO THIS YOUNG LADY AND HER BROTHER!!!! THEY ARE BEING RAISED WELL AND THANK THE LORD ALL THE KIDS ARE SAFE!!! PRAYERS FOR THE DRIVER'S RECOVERY! 🙏🏼🙏🏼🙏🏼

Thank God they are all Safe....Aniya you were very very Brave...you should be proud and your brother...Smart thinking...hope the bus driver ok

An auto sear, or a select fire switch, is a small device that can turn a semi-automatic handgun into an automatic weapon.
BUFFALO, NY・1 DAY AGO
WKBW 7 News Buffalo

The Buffalo Police Department is asking for the public's help in locating a missing 48-year-old woman.
BUFFALO, NY・21 HOURS AGO
WKBW 7 News Buffalo

Still no arrests have been made as 19-year-old Tyler Lewis was stabbed and killed outside of the North Campus of University at Buffalo in October of 2022.
BUFFALO, NY・1 DAY AGO
WKBW 7 News Buffalo

The Buffalo Police Department is asking for the public's help in finding a missing 15-year-old girl.
BUFFALO, NY・1 DAY AGO
WKBW 7 News Buffalo

The Niagara Falls Police Department announced Thursday an arrest in connection with the murder of a 24-year-old man.
NIAGARA FALLS, NY・16 HOURS AGO
WKBW 7 News Buffalo

When the Blizzard of '22 swept through Western New York, roads were closed for days. The NFTA suspended bus routes and shut down the Buffalo Niagara International Airport.
BUFFALO, NY・17 HOURS AGO
WKBW 7 News Buffalo

The City of Salamanca Police Department announced it is investigating after all the railcars at the Salamanca Rail Museum were vandalized.
SALAMANCA, NY・3 DAYS AGO
WKBW 7 News Buffalo

U.S. Attorney Trini E. Ross announced Wednesday that a Buffalo woman convicted of conspiracy to possess with intent to distribute, and to distribute, heroin, was sentenced to 10 years in prison.
BUFFALO, NY・1 DAY AGO
WKBW 7 News Buffalo

At least 20 people displaced from apartment fire in Springville

At least 20 people are without a home after a late-night fire on North Buffalo Street in Springville.
SPRINGVILLE, NY・3 DAYS AGO
WKBW 7 News Buffalo

Since summer, we’ve been reporting a continuous uptick in the amount of Kia vehicles being stolen across the nation, and right here in Western New York.
BUFFALO, NY・1 DAY AGO
WKBW 7 News Buffalo

A family in Niagara Falls is desperate for answers as they say their 24-year-old son was shot and killed outside the family home.
NIAGARA FALLS, NY・2 DAYS AGO