Ex-Boyfriend Of Pregnant Woman Who Was Fatally Shot In Harlem Arrested, Charged With Her Murder 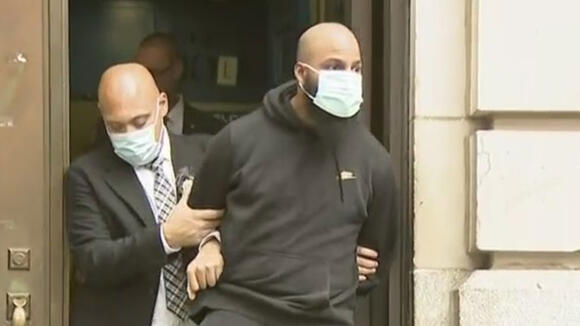 NEW YORK (CBSNewYork) — Police have made an arrest in the deadly shooting of a pregnant woman in Harlem .

The woman’s ex-boyfriend, Justin Soriano , was led out of the 23rd Precinct stationhouse in handcuffs late Thursday afternoon. He was arrested Thursday morning in the Bronx .

Investigators say Young was returning home from her own baby shower and may have tried to break up a fight when she was shot.

Her unborn baby did not survive.

“Our hope here is that this apprehension begins the process of closure for the family and, just as importantly, for the community for this terrible, terrible crime,” NYPD Commissioner Dermot Shea said.

Soriano is charged with second-degree murder. It’s unclear if Young was his intended target.

EVANSVILLE, Ind. — Two people are dead in Evansville, one shot by police, after a drawn-out incident that started in the early afternoon on Tuesday. Police say Heidi Carter had met a woman on a dating app and invited her and her boyfriend over to her home where they engaged in drug use and sexual activity. But, as that was going on, Carter’s boyfriend, Carey Hammond, showed up and became angry. With Carter’s help, police say he tied up the man and then strangled and beat him.
INDIANA STATE・7 DAYS AGO
WEAR

Report: Florida woman arrested for hitting her ex-boyfriend with a machete

ESCAMBIA COUNTY, Fla. -- On Wednesday, a 37-year-old woman was arrested and charged for allegedly hitting her ex-boy with a machete, stealing items and damaging his TV. According to the report, deputies responded to a home on Crary Road and made contact with the victim. The victim stated that his...
FLORIDA STATE・8 DAYS AGO
CBS New York

Woman Groped While Shopping At Macy’s In Brooklyn

NEW YORK (CBSNewYork) — Police are searching for a man they say groped a woman shopping at Macy’s in Brooklyn. It happened shortly before 9 p.m. Friday inside the store on Fulton Street. (Credit: NYPD) Police said the suspect approached the 39-year-old woman and grabbed her buttocks. Anyone with information about him is asked to call the NYPD’s Crime Stoppers Hotline at 1-800-577-8477 or for Spanish, 1-888-577-4782. Tips can also be sent to the NYPDTips Twitter account or submitted online at NYPDCrimeStoppers.com.
BROOKLYN, NY・3 DAYS AGO

Woman kidnapped, threatened to be killed by ex-boyfriend and his new girlfriend, shot as she fled

MERCED, CA – On October 12, 2021, at approximately 9:30 am, Merced County Sheriff’s Deputies responded to the area of West Highway 140 and Rosa Road, in Stevinson for a report of a female victim saying she was kidnapped and threatened to be killed by her ex-boyfriend. The Merced County...
STEVINSON, CA・12 DAYS AGO
WWJ News Radio

(WWJ) Detroit Police are searching for a woman wanted for the attempted murder of a former boyfriend, along with an alleged accomplice. The suspect, identified by police as Mareona Waples, is accused of shooting her ex-boyfriend multiple times as he sat on the porch of a home in the 18000 block of Greeley, in the area of Nevada Ave. and I-75.
DETROIT, MI・8 DAYS AGO
NBC New York

An off-duty NYPD officer shot her girlfriend and another woman, killing the latter, after she discovered the pair together at a Brooklyn home on Wednesday, police said. The incident occurred around 5 p.m., at a home on 19th Avenue near 79th Street in Bensonhurst, according to police. The officer, who has not been identified, was at the home she shared with her 23-year-old girlfriend, when the other two arrived, police said.
BROOKLYN, NY・14 DAYS AGO
1010WINS

Police are searching for a man wanted in connection with a violent robbery that occurred on a Bronx street last month, authorities said.
NEW YORK CITY, NY・3 DAYS AGO

Woman Shoots Roommate Dead For Refusing to Kiss Her in Front of His Girlfriend: Police

When he kissed his girlfriend instead, the mom-of-three murdered him, prosecutors say. An Illinois man was shot dead in front of his girlfriend after refusing to kiss their roommate, police say. Claudia Resendiz-Flores, 28, had recently moved into the couple's home Rolling Meadows, the Chicago Sun-Times reported. On Thursday, all...
PUBLIC SAFETY・10 DAYS AGO
CrimeOnline

A Florida high school senior endured a 31 minute beating from three other teens before one of them stabbed him in the neck and the chest with a sword. Investigators said that 17-year-old Andre Clemens, 17-year-old Christie Parisienne, and 16-year-old Jaslyn Smith planned the death of 18-year-old Dwight “DJ” Grant for a week before luring him into his apartment stairwell with a phone call, WSVN reported.
PUBLIC SAFETY・2 DAYS AGO
WSFA

MONTGOMERY, Ala. (WSFA) - A Pike County man has been arrested after authorities say he admitted to shooting and killing a woman on a highway Tuesday. According to Pike County Sheriff Russell Thomas, Dustin Byrd, 33, of Goshen, is charged with murder. Jail records show is also charged with possession of marijuana and possession of drug paraphernalia.
PIKE COUNTY, AL・1 DAY AGO
Daily Voice

Four residents of Willingboro have been arrested in connection with the fatal shooting of a 17-year-old man and the wounding of his father in a Walmart parking lot, authorities said.The shooting occurred at 10:15 p.m. on Oct. 7 outside the Walmart off Route 541 in Burlington Township, according to …
BURLINGTON COUNTY, NJ・1 DAY AGO

NYPD cop who 'shot ex-girlfriend and killed her new partner' is charged with murder: Friends say officer had 'altercation' with the couple in weeks before shooting but decided not to report it to authorities

NYPD cop Yvonne Wu has been charged with murder and attempted murder for allegedly shooting her ex-girlfriend and killing her new lover after lying in wait at their home in Brooklyn. Wu, 31, and Jenny Li, 23, had split up a month ago, but the cop was unable to get...
PUBLIC SAFETY・13 DAYS AGO
NWI.com

CROWN POINT — A Crown Point man pleaded guilty Friday in connection with allegations he burned a pregnant girlfriend with a cigarette and stabbed her with a pen last year in Hammond. David R. Jones, 39, admitted to one count of domestic battery resulting in bodily injury, a level 5...
CROWN POINT, IN・2 DAYS AGO
whdh.com

Officials: Woman fatally shot man after he refused to kiss her

(WHDH) — A woman shot and killed a man last week because he refused to kiss her during a gathering at their home, officials said. Claudia Resendiz-Florez, 28, of Rolling Meadow, Illinois, was arrested Thursday on charges including first-degree murder, according to the Rolling Meadows Police Department. Officers responding to...
PUBLIC SAFETY・10 DAYS AGO
CBS Philly

PHILADELPHIA (CBS) — Police want you to take a look at new evidence in the manhunt for the killer of a 13-year-old who was gunned down on the way to school in North Philadelphia. About a dozen gunshots can be heard in surveillance video from Judson and Clearfield Streets. One of the bullets struck the student as he was sitting in a car on Oct. 8. However, there’s still no indication he was the intended target. Five others were wounded. Police have identified 29-year-old Shafeeq Lewis as the gunman. You can see the distinctive tattoos on his neck and forehead. There is a $20,000 reward in this case. If you have any information, please contact police.
PHILADELPHIA, PA・19 HOURS AGO
PIX11

MINEOLA, N.Y. – A man pleaded guilty Tuesday to murder charges in the Long Island hammer attack that left his mom, his sister and a family friend dead. Bobby Vanderhall, 37, is expected to be sentenced to 50 years in prison during his Dec. 17 sentencing, officials said. Early on Aug. 12, 2017, he forcibly […]
1 DAY AGO
CBS New York

CORAM, N.Y. (CBSNewYork) — Police made an arrest Monday in a fatal stabbing on Long Island. An ex-boyfriend from Albany is accused of killing a Coram woman in her front yard, CBS2’s Carolyn Gusoff reported. Family members of Meghan Kiefer were in tears in court as details emerged of her killing. The 27-year-old was stabbed, prosecutors say, by her ex-boyfriend, Kason Parker, who was staying at the house. They said she returned to the house on Saturday afternoon with a friend to retrieve her credit card from Parker. With the friend’s twin babies in the back seat, the friend witnessed the couple arguing. According...
CORAM, NY・2 DAYS AGO
CBS Baltimore

BALTIMORE, Md. (WJZ) — Two men face attempted murder charges in connection with an East Baltimore shooting that sent a woman to the hospital, authorities said Wednesday. Tony Foster Jr., 25, and Jamel Phillips, 23, are being held on felony charges of conspiracy to commit first-degree murder and attempted first-degree murder, according to the Baltimore Police Department. The shooting happened shortly after midnight Aug. 28 near Bank and South Clinton streets, police said. Officers called to the scene that morning found a 52-year-old woman shot in the temple and forearm. She was taken to an area hospital for treatment. The victim told police she was shot after a man came up to her and demanded her purse. Afterward, she said, he hopped into a getaway vehicle waiting nearby. Based on a preliminary investigation, detectives zeroed in on Foster and Phillips as potential suspects the case. Phillips was arrested Sept. 15 and Foster was taken into custody Oct. 20, police said. The pair will remain in custody while awaiting court proceedings.
BALTIMORE, MD・22 HOURS AGO
theadvocate.com

Woman fatally shot boyfriend after she 'choked,' 'strangled' him during argument, EBRSO says

A woman fatally shot her boyfriend after she choked him during an argument early Monday, according to arrest records from the East Baton Rouge Sheriff's Office. Ebonie J. Hartwell, 29, of Baton Rouge, was booked hours later on a count of second-degree murder. Authorities say they responded at 12:45 a.m....
BATON ROUGE, LA・2 DAYS AGO