By Misty Severi
WashingtonExaminer
30 days ago 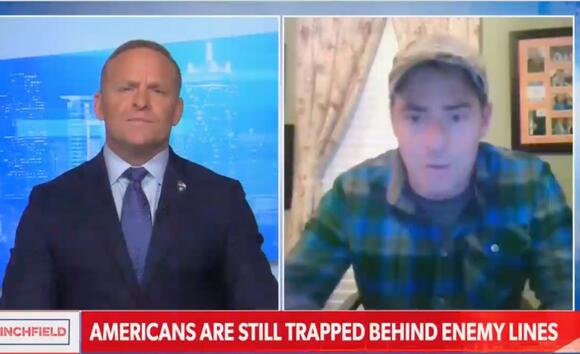 N ewsmax host Grant Stinchfield cut off an Iraq War veteran on his show Wednesday after he criticized former President Donald Trump for his handling of Afghanistan.

The veteran, Joe Saboe, responded to Stinchfield's statement that the withdrawal under President Joe Biden would not have gone as badly under Trump.

“We followed this closely from multiple administrations," Saboe said. "We know that Trump’s administration’s efforts here were fairly weak, that they were trying to limit the number of people that would get out — ”

After Saboe's comment, Stinchfield told Saboe not to come on the show and blame Trump for what went wrong in the withdrawal.

“You’re not gonna blame this on President Trump on my show,” Stinchfield said. “Don’t come on this program and take the talking points of the Left and blame President Trump. That’s not helping anybody."

Saboe recently made headlines for his effort to help Afghans flee the country after the Taliban took over. Saboe and his team created an email address for Afghans and U.S. citizens still stuck in Afghanistan to reach out for help.

The segment ended with Stinchfield criticizing the Biden administration for the highly controversial withdraw from Afghanistan.

The Afghanistan mess started with Trump who in 2/2019 surrendered to The Taliban. He wanted to take the Taliban to Camp David. He agreed to let the prisons be opened. Biden had a tough job because the Afghans tolled over to the Taliban. Given by Trump.

This anchor couldn't handle the truth.what a stench field that must follow this anchor though the rest of his career hope it's a short one

Lololol.. he is just like most trump supporters I knew.. they would get SO angry anytime you try to have a simple conversation with them .. the reason they get SO defensive is it just shows their lack of intelligence AND how foolish they have looked for supporting him!! I can’t believe the handful of people I thought were friends, would be SO incredibly hideous! Lesson learned !! You never really know someone .

"That's not necessarily something we want to do up front…but if he has pieces of information we need, we certainly will," said the Illinois lawmaker.
CONGRESS & COURTS・3 HOURS AGO
Business Insider

Democrats mock Donald Trump over Virginia governor race, flying a plane with a banner near Mar-a-Lago

The former president has now lost the popular vote in two consecutive elections and could struggle to win in 2024.
PRESIDENTIAL ELECTION・1 DAY AGO
Newsweek

The California congressman has called the former president a "clear and present danger" to democracy.
POTUS・1 DAY AGO

“I like kids better than people,” President Biden said Friday after getting a hug from a toddler in Connecticut while nearby protesters bellowed, “F–k Joe Biden.”. “When I talked to all your folks out on the playground, I joked that everybody knows I like kids better than people. Fortunately they like me. That’s why maybe I like them,” Biden said during a speech in Hartford.
PRESIDENTIAL ELECTION・2 DAYS AGO
The Independent

Donald Trump has become the favourite to win the election in 2024, as Joe Biden falls behind the former US president and faces challenges with his domestic agenda. Mr Trump, according to betting odds, had been ahead in the race for the Republican nomination in 2024 but had not been on odds for a win in the election.However, recent odds byBetfair Exchange found Mr Trump is now 4.8 to win in 2024. Mr Biden, meanwhile, was at 5.1 after falling behind his own vice president, Kamala Harris, in the presidential tie-up. Although neither Mr Trump nor Mr Biden have...
PRESIDENTIAL ELECTION・2 DAYS AGO
WashingtonExaminer

The former president called withholding votes in the upcoming elections the "most important thing" Republicans can do.
PRESIDENTIAL ELECTION・3 DAYS AGO

President Joe Biden on Thursday signed into law a bill raising the nation's debt limit until early December, delaying the prospect of an unprecedented federal default that would cause economic disaster.
CONGRESS & COURTS・2 DAYS AGO
CNN

Andrew McCabe, fired by Trump, gets pension back

(CNN) — Former FBI Deputy Director Andrew McCabe, who had been fired hours before his retirement as then-President Donald Trump's political furor toward him grew, has settled a lawsuit with the Justice Department, allowing him to officially retire and to recoup hundreds of thousands of dollars in legal fees and his pension.
POTUS・2 DAYS AGO
The Associated Press

HARRISBURG, Pa. (AP) — An endorsement by former President Donald Trump in Pennsylvania’s hotly contested U.S. Senate race isn’t backing down rival Republicans, with one putting up millions for her campaign and another getting a seven-figure pledge from a donor. Carla Sands, Trump’s ambassador to Denmark, loaned her campaign $3...
ELECTIONS・2 DAYS AGO
Newsweek

Donald Trump Not 'Off Limits' For a January 6 Subpoena, Committee Chair Says

"Nobody is off limits to a subpoena from this committee," House 1/6 Select Committee Chairman Bennie Thompson said.
POTUS・2 DAYS AGO

The Republican Party doesn't have a platform. Or a policy agenda. Or substantive issues it's eager to work on. Or compelling leaders who are ready to govern. What defines the contemporary GOP — the one thing that animates the party more than anything else — is an unshakable belief in a ridiculous lie about Donald Trump's 2020 defeat. The former president boasted at an Iowa rally this past weekend, "It's the single biggest issue, the issue that gets the most pull, the most respect, the biggest cheers is talking about the election fraud of the 2020 presidential election."
POTUS・3 DAYS AGO
POLITICO

The president has made claims of fraud the centerpiece of his post-presidency. It would be a legislative feature of a second term too.
PRESIDENTIAL ELECTION・2 DAYS AGO
POLITICO

The latest letter helps establish a paper trail for what could be a serious executive privilege fight. Biden's stance: President Joe Biden's counsel, Dana Remus, on Friday declined to grant executive privilege to shield an initial batch of Trump-era documents sought by congressional investigators probing the Jan. 6 attack. The former president pushed back, asserting broad privilege, and Remus replied in the negative on Wednesday.
PRESIDENTIAL ELECTION・3 DAYS AGO
MSNBC

As Democrats try to to get the Biden agenda passed on Capitol Hill, Republicans could soon be dealing with Donald Trump's legal issues. What is the likelihood Trump is in genuine legal trouble? James Carville and Mark McKinnon discuss.Oct. 8, 2021.
POTUS・9 DAYS AGO

WASHINGTON (AP) — President Joe Biden will restore two sprawling national monuments in Utah that have been at the center of a long-running public lands dispute, and a separate marine conservation area in New England that recently has been used for commercial fishing. Environmental protections at all three monuments had been stripped by former President Donald Trump.
PRESIDENTIAL ELECTION・9 DAYS AGO
WashingtonExaminer

Support among Republicans for former President Donald Trump and his likely 2024 bid is surging, as is the rejection of any who decry him, according to new polling.
PRESIDENTIAL ELECTION・10 DAYS AGO
AOL Corp

Ex-press secretary Stephanie Grisham: If Trump wins in 2024, 2nd term will be about 'revenge'

If former President Donald Trump runs and wins back the White House in 2024, his second term in office will be all about "revenge," his former press secretary said Monday. In an interview with ABC News' George Stephanopoulos, Stephanie Grisham said that the former president's administration often held back in pursuing retribution against his perceived political enemies because he was seeking reelection.
PRESIDENTIAL ELECTION・13 DAYS AGO
MSNBC

Trump sued her, she won

Omarosa Manigault Newman explains how she beat Donald Trump in court and why it could be a nightmare for him.Oct. 2, 2021.
POTUS・15 DAYS AGO