Borussia Dortmund have reportedly lined up Chelsea's Timo Werner as a potential replacement for Erling Haaland if he leaves next summer.

Haaland, who scored in Dortmund's 2-1 win against Besiktas on Wednesday night, has a release clause in the region of £68million which will become active from next summer, and the Norwegian 21-year-old is set to be in demand as a result of his prolific goalscoring form.

As such, Dortmund executive Michael Zorc is already identifying potential successors and German outlet SportBild state that Chelsea forward Werner is one of the candidates to replace Haaland. 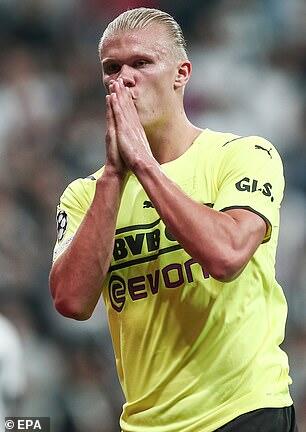 The report details that Werner, who only moved to Chelsea last summer, is a 'surprising solution' for Dortmund.

However, with Werner said to be on a salary of around £17m per year, a pay-cut would be necessary for him to move to Westfalenstadion.

Bayern Munich have also been linked with the Germany international, who has been bumped down the pecking order at Stamford Bridge following Romelu Lukaku's arrival.

Haaland has started this season in terrific form, scoring nine goals in seven appearances in all competitions.

Werner, meanwhile, did not come off the bench in the 1-0 win against Zenit St Petersburg on Tuesday and has only played nine minutes of club football since Lukaku's return to the club from Inter.

Werner signed for the Blues for around £50m in 2020, but endured a tough first season in the Premier League, scoring just six goals in 35 appearances.

He did play a major role however in Chelsea's Champions League triumph under Thomas Tuchel, starting in the final win against Manchester City.

A report has emerged suggesting that PSG could turn their attentions to Liverpool’s Mohamed Salah should they fail to retain Kylian Mbappe or sign Borussia Dortmund’s Erling Haaland. According to a report from AS, Salah, who has been in remarkable form and has already scored 12 goals this season could...
PREMIER LEAGUE・2 DAYS AGO
Daily Mail

Manchester City will step up their pursuit of Erling Haaland with the club set for talks with his agent Mino Raiola in January over a move to the Premier League next summer. According to The Times, Haaland is now the top name on City's list of transfer targets and Pep Guardiola is looking for a new No 9 after the departure of Sergio Aguero last summer.
PREMIER LEAGUE・10 DAYS AGO
Yardbarker

Bayern Munich could potentially make a move for Chelsea's Timo Werner, according to reports. He only joined the Blues last summer but rumours have suggested the Bundesliga Champions may be interested in acquiring his services. The German has played in his native country for the majority of his career, having...
PREMIER LEAGUE・14 DAYS AGO
FanSided

Borussia Dortmund are hopeful of having Erling Haaland and Manuel Akanji in the squad for this weekend’s Bundesliga clash against Mainz 05. Erling Haaland returned to Borussia Dortmund’s training ground on Tuesday after spending a few days working on his recovery in Marbella. According to Ruhr Nachrichten, the pain in Haaland’s thigh has now subsided. And he could be back in the squad for this weekend’s game against Mainz 05. The newspaper adds that the final decision on his status will only be made closer to the game.
SOCCER・10 DAYS AGO

The summer transfer window was unlike any other; see all the major deals and check out how we graded the biggest signings. And just because the window is shut until January, that doesn't mean the rumours won't keep coming. Here is the latest gossip and speculation. TOP STORY: Barca still...
PREMIER LEAGUE・8 DAYS AGO
Tribal Football

Chelsea striker Timo Werner is delighted with his sudden run of goalscoring form. Goals against Aston Villa and Southampton saw Werner enter the international break in a buoyant mood and his brace in Skopje secured the Germans' place at next year's World Cup in Qatar, taking his tally to four goals in five games.
PREMIER LEAGUE・9 DAYS AGO
90min.com

Erling Haaland's agent Mino Raiola will hold talks with Premier League giants Manchester City in January, over the possibility of a summer transfer to the Etihad Stadium. The Borussia Dortmund superstar is going to be front and centre of a transfer tug-of-war next year, when a €75m release clause in his contract becomes active. Clubs will not need to negotiate with Der BVB to land the Norwegian, meaning they must convince the 21-year-old to reject other lucrative offers in favour of their own.
PREMIER LEAGUE・9 DAYS AGO
ClutchPoints

Erling Haaland has received a stern reminder from Borussia Dortmund teammate Mats Hummels on his future amid interest from Man City and Man United ahead of next summer’s transfer window. Hummels, who has played for both BVB and Bayern in his career, told Haaland that a change of scenery doesn’t...
SOCCER・8 DAYS AGO

Timo Werner's Chelsea future could depend on the decision of Borussia Dortmund star Erling Haaland amid interest from Bayern Munich, according to reports in Germany. The 25-year-old joined Chelsea from RB Leipzig at the beginning of last season and lifted the Champions League trophy in his first season as a Blue.
PREMIER LEAGUE・13 DAYS AGO
fourfourtwo.com

Mats Hummels has hinted that Erling Haaland should stay at Borussia Dortmund, warning his team-mate that the "grass is not always greener". The Norway international is the most in-demand footballer in the world ahead of an anticipated transfer in 2022. Haaland will be available for around £66m next summer due...
FIFA・8 DAYS AGO
Sports Illustrated

Borussia Dortmund insists it's real—and it is truly spectacular if that's the case. Erling Haaland puts on a show.
SOCCER・7 DAYS AGO
Daily Mail

Borussia Dortmund 3-1 Mainz: Erling Haaland marks his return with a brace as Dortmund move top of the Bundesliga

Borussia Dortmund top striker Erling Haaland scored twice on his return from injury with a second half penalty to help his team beat Mainz 05 3-1 on Saturday to go top of the Bundesliga table. The Norwegian forward, who had been out since late September, scored in the 54th minute...
SOCCER・6 DAYS AGO

Newcastle have included Timo Werner on their list of transfer targets, according to reports. Saudi Arabia's Public Investment Fund (PIF) completed the takeover of the Magpies last week. The controversial deal was granted approval after the PIF succeeded in convincing the Premier League that it is a separate entity to...
PREMIER LEAGUE・8 DAYS AGO
FanSided

The Norweigan forward has been one of the most eye catching players in the world for a few years now. His fantastic goal record at Salzburg attracted a few clubs but it was Borussia Dortmund that were able to tempt him away. Since joining Dormund, Haaland has taken his form...
PREMIER LEAGUE・4 DAYS AGO
FanSided

According to multiple reports in Germany, Borussia Dortmund are among a host of teams interested in Fiorentina striker Dusan Vlahovic. As rumors surrounding the potential departure of Erling Haaland in the summer of 2022 continue to circulate, rumors surrounding players Borussia Dortmund may be targeting as his replacement are equally as plentiful. Of the players linked with the Black and Yellows, Dusan Vlahovic’s name is one of the more interesting to have entered the conversation. Both Sky Sport and SportBILD report that Dortmund have an interest in the Fiorentina striker.
SOCCER・3 DAYS AGO
Absolute Chelsea

Former Chelsea striker Olivier Giroud has praised Timo Werner, despite the German having a tough start to life at the club. Giroud joined the Blues at the start of 2018 from London rivals Arsenal and enjoyed a successful career in blue. He signed a new deal in the summer but...
PREMIER LEAGUE・5 DAYS AGO
SPORTbible

Erling Haaland greeted a pitch invader by giving the fan his shirt and then celebrating, following Borussia Dortmund's win against Mainz. Haaland doesn't give his match day shirts to everyone, as Gibraltar player Reece Styche revealed last month, after the Norwegian refused to swap shirts following a World Cup qualifier.
SOCCER・2 DAYS AGO
Absolute Chelsea

Timo Werner will give his all to return to action as quickly as possible after the Chelsea forward suffered a hamstring injury. The 25-year-old was replaced by Callum Hudson-Odoi in the first half of their 4-0 win over Malmo in the Champions League on Wednesday night at Stamford Bridge. Werner...
SOCCER・1 DAY AGO
NBC Sports

Chelsea’s cruise past Malmo in Champions League play at Stamford Bridge was anticipated by many. Few would’ve guessed the rain-drench pitch would cost the Blues a pair of strikers. Romelu Lukaku and Timo Werner limped off the pitch in London with Chelsea boasting a 2-0 lead on goals from Andreas...
PREMIER LEAGUE・2 DAYS AGO