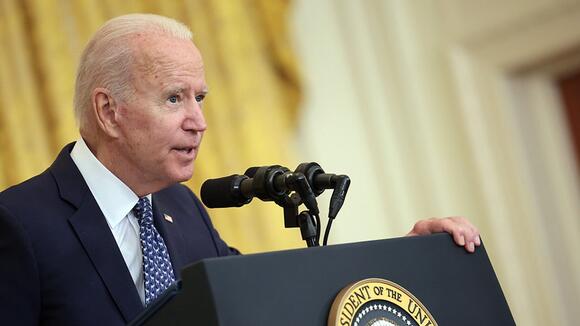 Twenty-four states threatened to sue the Biden administration on Thursday over the president's new rule to require employers with more than 100 employees to mandate vaccinations and frequent testing for their workers.

A group of Republican state attorneys general sent a letter to President Biden vowing to take legal action if he did not reverse course, arguing that the mandate would be illegal and unlikely to be successful as a public health measure.

"The vaccines have helped protect millions of Americans, and there are surely others who could benefit from obtaining this treatment," the letter reads. "But convincing those who are hesitant to do so would require you to allow room for discussion and disagreement. Instead, you have offered the American people flimsy legal arguments, contradictory statements, and threatening directives. It is almost as if your goal is to sow division and distrust, rather than promote unity and the public's health."

Earlier this month, Biden directed the Labor Department's Occupational Safety and Health Administration (OSHA) to order employers with 100 employees or more to mandate vaccination or make workers submit to weekly COVID-19 testing. The rule would impact tens of millions of private workers.

Republicans have issued public outcry against the directive, while Biden has stuck to his guns, defending it as crucial to the government's effort to boost vaccination rates in the face of surging cases and deaths from the disease.

“The vast majority of the American people know we have to do these things,” Biden said last week when asked about Republican criticism of the mandate. “They’re hard but necessary. We’re going to get them done.”

The mandate is sure to set the stage for a court battle with some state officials. One GOP attorney general, Mark Brnovich of Arizona, who was among the signatories on Thursday's letter, already filed suit against the administration earlier this week.

A White House spokesman did not immediately respond when asked for comment.

The group of state attorneys general called on Biden to "allow people to make their own decisions" about the vaccine.

"If your Administration does not alter its course, the undersigned state Attorneys General will seek every available legal option to hold you accountable and uphold the rule of law," they wrote in their letter.

Recent decisions by three justices suggest the Court is not prepared to revisit a precedent established in 1905.
CONGRESS & COURTS・3 DAYS AGO
KCRG.com

Iowa State released two complete internal and independent reports on the school's Crew Club following the deaths of two students in a boating accident. After almost half a century, the city of Manchester will have a new mayor next year. Court orders restrictions on picketers at Davenport Deere site. Updated:...
IOWA STATE・3 DAYS AGO
geneticliteracyproject.org

This article or excerpt is included in the GLP’s daily curated selection of ideologically diverse news, opinion and analysis of biotechnology innovation. It is posted under Fair Use guidelines. As Montana intensive care units fill with critically ill, mostly unvaccinated COVID-19 patients, hospital leaders there are caught between two laws...
PUBLIC HEALTH・4 DAYS AGO
Bluefield Daily Telegraph

WASHINGTON — U.S. Rep. Morgan Griffith, R-Va, says his constituents are sending a clear message to his office. They are opposed to President Joe Biden’s vaccine mandates and his proposed plan to monitor the bank accounts of citizens with balances of over $600. Griffith represents about 700,000 residents of Virginia’s...
CONGRESS & COURTS・8 DAYS AGO

Florida Gov. Ron DeSantis announced on Thursday he would challenge the Biden administration over any vaccine mandates President Joe Biden may implement in the future. "Let's not have Biden come in and effectively take away — threaten to take away — the jobs of people who have been working hard throughout this entire pandemic," DeSantis said during a news conference in Fort Myers. "I am offended that a police officer could potentially lose their job."
FORT MYERS, FL・9 DAYS AGO
Fox News

AUBURN, Ind. (Fort Wayne's NBC) -- State Senator, Republican Dennis Kruse is pushing back against President Biden’s mandate to require COVID-19 vaccines for companies with 100 or more workers. He says he is working with other state lawmakers to create a bill to keep the mandate from applying to the...
INDIANA STATE・3 DAYS AGO
cowboystatedaily.com

***For All Things Wyoming, Sign-Up For Our Daily Newsletter***. Gov. Mark Gordon is continuing to prepare a legal challenge against President Joe Biden’s proposed vaccine mandate. Gordon and Attorney General Bridget Hill are preparing Wyoming’s legal challenge to the mandate when they are finalized. However, the administration has not yet...
HEALTH・10 DAYS AGO

Former President Barack Obama traveled to New Jersey on Saturday to campaign for Gov. Phil Murphy and claimed that he understands why Americans are questioning when COVID-19 mandates will end. BIDEN LEANS MORE ON OBAMA WITH WHITE HOUSE UNDER PRESSURE FROM MULTIPLE CRISES. "The science says it's the right thing...
POTUS・7 HOURS AGO
Newsweek

The St. Louis Post-Dispatch editorial board said the "shameful roster" is "once again running interference for a lawless ex-president."
PRESIDENTIAL ELECTION・12 HOURS AGO
Fox News

Stone said Dr. Anthony Fauci should be "prosecuted" while speaking at an anti-vaccination conference in Nashville.
NASHVILLE, TN・9 HOURS AGO
Business Insider

Individuals who are fully vaccinated now might not be considered so in the future without a COVID-19 booster shot, CDC says

Currently, being fully vaccinated in the US means an individual has both doses of the Pfizer or Moderna vaccine or one dose of the J&J vaccine.
PHARMACEUTICALS・17 HOURS AGO
Newsweek

Steve Bannon's podcast has heard an assessment of the vote to hold him in contempt of Congress for defying a subpoena from the committee investigating the January 6 insurrection. Thursday's 229-202 vote by the House of Representatives against the former aide to ex-President Donald Trump signals intent from Democrats and...
CONGRESS & COURTS・1 DAY AGO
Fox News

College Republicans at Washington & Lee University were told last month to take down materials in support of Virginia gubernatorial candidate Glenn Youngkin -- a move the university said was done to keep it in compliance with its non-profit status under the Internal Revenue Service (IRS). The Foundation for Individual...
PRESIDENTIAL ELECTION・12 HOURS AGO
cbs12.com

State bans most employers from testing for marijuana

ROCHESTER, N.Y. (WHAM) — Guidance from the New York State Department of Labor says most companies can no longer require employees to be tested for marijuana or discriminate against employees for use of the drug outside of the workplace. For most jobs in the public and private sectors, companies are...
ECONOMY・1 DAY AGO
MarketWatch

The governor's race in the Democratic-leaning state of Virginia is drawing considerable attention this fall, with analysts connecting the contest to President Joe Biden's spending plans and next year's U.S. midterm elections.
VIRGINIA STATE・18 HOURS AGO
Washington Examiner

Senate Democrats confirmed someone who is arguably President Joe Biden’s worst nominee. You can thank former President Donald Trump for it. Catherine Lhamon, Biden’s nominee for the Department of Education’s Office for Civil Rights, was confirmed by a 51-50 vote, with every Democratic senator voting to confirm her and Vice President Kamala Harris breaking the tie.
PRESIDENTIAL ELECTION・1 DAY AGO
cyberscoop.com

US warns that Chinese government is using 'wide variety' of methods, some illegal, to steal trade secrets

The Chinese government’s aggressive push to dominate emerging technology such as artificial intelligence, quantum computing, and biotechnology make Beijing the “primary strategic competitor” to the U.S., the National Counterintelligence and Security Center said in a notice published Friday. The threat from the Chinese government with respect to these technologies is...
FOREIGN POLICY・1 DAY AGO