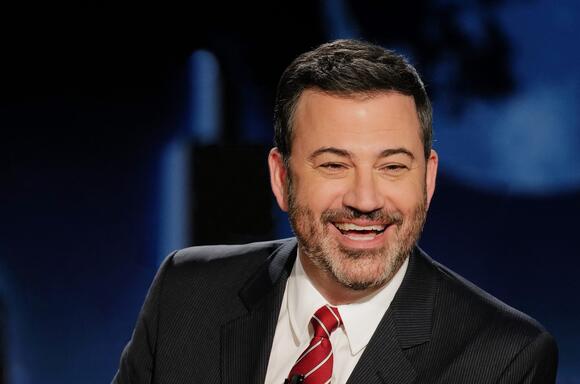 The late-night world has been speculating for some time as to whether Jimmy Kimmel will continue his ABC talkshow after his contract runs out next year.

The Jimmy Kimmel Live ! host discussed his future on SiriusXM’s The Howard Stern Show , but admitted that he doesn’t know whether he will continue after the show’s 20th season.

It comes as Kimmel is back on the show after the summer off – a benefit of his last contract that he signed in 2019 , giving him a decent summer break with the show continuing with guest hosts.

The show has been performing well in the ratings, coming second to The Late Show with Stephen Colbert last season and beating The Tonight Show Starring Jimmy Fallon.

It’s evident that ABC wouldn’t want to lose him, particularly as there is no ready-made replacement for him given that the Disney-owned network doesn’t have a show that follows Kimmel in the same way that NBC and CBS have Seth Meyers and James Corden.

“I know I’m on the home team here but I think, Jimmy, really is the best host of late-night. It’s really a golden era, I think Fallon, Conan and Trevor Noah, they’re all fantastic, but Jimmy’s got the institutional knowledge. He’s been there the longest now and he’s still great every night. We’re really excited [by the performance],” Mills told Deadline in May.

Kimmel has a bit of time to decide, but as we’ve seen with the recent news that Corden is currently negotiating a new deal at CBS , as revealed by Deadline, on a similar timeframe to Kimmel, it is dealmaking time.

He has also been ramping up his producing efforts after he teamed with Leftfield Entertainment founder Brent Montgomery to launch media company Kimmelot as a joint venture with Montgomery’s Wheelhouse Entertainment.

The host, who also spoke to Stern about his documentary about the ’86 New York Mets, Once Upon a Time in Queens, also said that he’s rooting for Conan O’Brien to win the Emmy this weekend.

He said he thinks that Jimmy Kimmel Live! wouldn’t pick up the statue for Outstanding Variety Talk Series, but said that he was hoping for a win for the retired Conan, rather than Last Week Tonight, which has won five years in a row.

“You would rather he win the Emmy than you?” Howard asked.

“I’m not that nice a guy,” Jimmy said. “We would love to win the Emmy. I just know we’re not going to win the Emmy, so I think it would be a nice thing [if Conan wins].”

“Especially amongst comedians and his peers, he is thought of as one of the greats,” Kimmel added. “I think [an Emmy win is] certainly deserved. I know the Emmys isn’t a lifetime achievement type situation, but I do think that Conan—not only was he really funny and very consistent, which is hard—he stuck to his guns.”

“You will not find two funnier guys in real life than Conan and Andy,” he said.

Ted Lasso star Jason Sudeikis made his Saturday Night Live hosting debut last night, giving the show a “popular cast member returns” ratings bump. Last night’s telecast of SNL with host Sudeikis and musical guest Brandi Carlile drew a 3.7 household live + same day rating in the 41 metered local markets and 1.6 in 18-49 in the 22 markets with local people meters.  That was up from last week’s show, hosted by Rami Malek with musical guest Young Thug (3.4, 1.3). It tied in 18-49 and was off by a tenth in households from the highest-rated telecast so far this season,...
TV & VIDEOS・2 DAYS AGO
Deadline

The Jonas Brothers will be taking the heat in Jonas Brothers Family Roast, a one-hour comedy special set to premiere on Netflix on November 23, with Kenan Thompson as host. The streamer’s first-ever family roast, Jonas Brothers Family Roast, is described as “a one of a kind comedy special of epic proportions that celebrates the universal truth that no one can get under your skin quite like your own family. You’ll see the multi-platinum global superstars the Jonas Brothers like you’ve never seen them before through sketches, songs, games, and special guests – all to give them a roasting they’ll never forget.” The special will feature guest appearances by Pete Davidson, Niall Horan, Gabriel “Fluffy” Iglesias, John Legend, Lilly Singh, Jack Whitehall and more. Jonas Brothers Family Roast is produced by Fulwell 73. Emma Conway and Gabe Turner executive produce for Fulwell 73, along with Kevin, Joe and Nick Jonas. James Longman is executive producer and showrunner. Lauren Greenberg is head writer. You can watch the announcement below.
TV & VIDEOS・2 DAYS AGO
Footwear News

Simone Biles brought a sleek take on her versatile style for an interview on “Jimmy Kimmel Live!” The 24-year-old Olympian appeared on the late-night show in a strapless black jumpsuit. The garment featured a wide-leg silhouette, while also proving ideal for layering. Biles paired the chic piece with a pair of crop earrings, which indulged several natural pearls on thin gold chains. For shoes, the award-winning gymnast wore Cinderella-worthy clear sandals. Her footwear featured transparent block heels that appeared to total at least 3 inches in height, as well as clear PVC toe and slingback straps. The “glass slipper” shoes transformed her outfit...
BEAUTY & FASHION・27 DAYS AGO
iHeartRadio

Billie Eilish has gotten back at Jimmy Kimmel for his 2019 quiz of references from the 1980s that had stumped her, the pop superstar turning the tables on him to ask if he knows any current references.
CELEBRITIES・13 DAYS AGO

From winning seven Grammys to writing a Bond song by age 19, it seems like Billie Eilish has accomplished all she could ever dream of. On Wednesday night, Eilish sat down with Jimmy Kimmel to talk about all things music and James Bond. She revealed that one of her songwriting assignments growing up was pretending to write a Bond song with her brother Finneas and seeing how they could emulate the same tone in their original songs. She teased Kimmel about his age by quoting a popular Tik Tok sound, “Mommy, sorry, mommy,” only to be met with his confusion. Eilish went through her childhood bucket list with Kimmel and began with cutting an excited fan’s hair. Afterward, the list escalated to Eilish punching Kimmel in the stomach and getting kicked out of a Target by two security guards in red polos. Despite completing her bucket list and probably brainstorming a new one, don’t expect a Billie Eilish concert in space to be added anytime soon. The singer said she’d “literally rather do anything else” than go into the stars. Hopefully, billionaires can take note of that.
CELEBRITIES・13 DAYS AGO
Elite Daily

Billie Eilish may have forgiven Jimmy Kimmel for embarrassing her on his show, but she certainly hasn’t forgotten. In case you missed it, Eilish’s November 2019 appearance on Jimmy Kimmel Live! went viral when he quizzed her on a list of throwback bands and she revealed she didn’t know who Van Halen was. This was totally understandable, considering Eilish is 19 and band formed in, uh, 1972. When she appeared on the show once again on Oct. 13, it was the perfect time for revenge. Billie Eilish dragged Jimmy Kimmel for making her look "stupid" and even gave him a test of his own.
MUSIC・13 DAYS AGO
fox40jackson.com

Billie Eilish called out Jimmy Kimmel during an appearance on his show for making her look bad the last time she was on in 2019. The singer joined the late-night host Wednesday to promote her new album, “Happier Than Ever,” which gave her an opportunity to address the previous interview she did at 17. Because she was so young, Kimmel decided to ask her some questions about things that were popular when the host was her age in 1984.
CELEBRITIES・13 DAYS AGO
Yardbarker

Jimmy Fallon is New York City, through and through. When Fallon took over The Tonight Show, the iconic late-night talk show moved to its original home of New York City, the 47-year-old's hometown. That didn't prevent him from being mistaken as the other Jimmy of late-night television based in Los Angeles.
CELEBRITIES・5 DAYS AGO

Larry David's latest story sounds like a script from Curb Your Enthusiasm. While appearing on Jimmy Kimmel Live! Tuesday, the 74-year-old comedian shared a funny anecdote about a dinner party gone wrong with host Jimmy Kimmel himself. Kimmel, 53, told his viewers David had been invited to have dinner at...
CELEBRITIES・14 DAYS AGO
E! News

Watch: Billie Eilish Reveals HIDDEN Leg Tattoo in 2nd Met Gala Look. Billie Eilish decided she might as well jump at the chance to call out Jimmy Kimmel for their infamous previous interview that caused quite a stir on social media. On Wednesday, Oct. 13, the 19-year-old music superstar visited...
CELEBRITIES・13 DAYS AGO
Finger Lakes Times

Conan consults an obituary writer about how he wants to be remembered and crafts a plan to steal his pre-written obituary from The New York Times. Subscribe to watch more Team Coco videos https://www.youtube.com/channel/UCi7GJNg51C3jgmYTUwqoUXA?sub_confirmation=1. Listen to the Full Podcast https://link.chtbl.com/conan. FOLLOW TEAM COCO PODCASTS ON SOCIAL. Conan O’Brien on Twitter...
CELEBRITIES・14 DAYS AGO
Guitar World Magazine

Phoebe Bridgers performed on Jimmy Kimmel Live last night, opting to perform an acoustic version of Punisher track, Moon Song. The setting for the performance was appropriately space-themed, with Bridgers and violinist Rob Moose both donning astronaut outfits, with the latter performing from a space capsule. The recorded version of...
MUSIC・14 DAYS AGO

Jimmy Kimmel on the Facebook papers: ‘Are we surprised by this?’

Late-night hosts discuss Facebook, record-setting rain in the west, and a bombshell report that Republicans lawmakers met with organizers of the Capitol attack
CELEBRITIES・1 DAY AGO
Finger Lakes Times

The wheels are in motion, this is happening. He’s got the musical library and the regional star power to back it up and now Parker McCollum is setting up to be Country Music’s next big star. Texas native will be taking his talents to late night television. The Limestone Kid...
CELEBRITIES・2 DAYS AGO