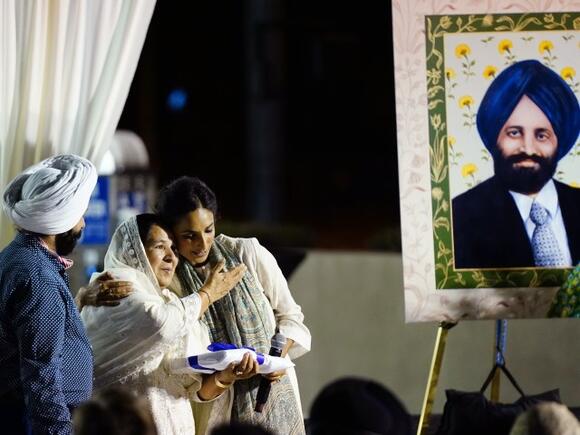 MESA, Ariz. (AP) — Balbir Singh Sodhi is being remembered as the first person to die in the bias attacks unleashed after hijackers crashed airplanes into the World Trade Center and the Pentagon on 9/11.

Following Sodhi's death at his Arizona gas station, more Sikhs, Arab Muslims and other people of varied ethnicities, races and faiths died because they were perceived as different. Faith leaders say the attacks 20 years ago released a dangerous wave of white supremacy and Islamophobia.

But they also helped broaden, diversify and solidify an interfaith movement aimed at greater understanding and better communication among different religions.

A Maricopa County sheriff’s deputy who died after being beaten by a suspect is being remembered as man who lived his dream to protect and serve.
PHOENIX, AZ・3 HOURS AGO
KGUN 9 Tucson News

Tucson Police Chief Chris Magnus is in Washington, DC, Tuesday for a hearing as Senators consider his nomination to serve as the Commissioner for Customs and Border Protection.
TUCSON, AZ・10 HOURS AGO
KGUN 9 Tucson News

The Navajo Nation on Monday reported 30 more COVID-19 cases, but no additional deaths for the 13th time in the past 19 days.
PUBLIC HEALTH・22 HOURS AGO
KGUN 9 Tucson News

Teachers from across Southern Arizona and even some from as far as Mexico make the journey to Jonathan’s Educational Resources in Tucson to shop for their classroom supplies.
TUCSON, AZ・1 DAY AGO
KGUN 9 Tucson News

It’s one of the biggest decisions that parents can make: where to send their children to school?
TUCSON, AZ・1 DAY AGO
KGUN 9 Tucson News

An investigation involving a large private dormitory has ties to a probe in another state.
TUCSON, AZ・3 DAYS AGO

Arizona’s Governor has forbidden vaccine mandates for state employees, but the University of Arizona is requiring COVID vaccines for all University employees anyway.
TUCSON, AZ・3 DAYS AGO

Airman convicted in killing of Mennonite

A jury in Arizona has convicted a U.S. Air Force airman in the murder of a Mennonite woman who was living in New Mexico.
FLAGSTAFF, AZ・6 DAYS AGO
KGUN 9 Tucson News

More Afghans are coming to Tucson now because of the dangers they face after helping Americans there. Now Tucsonans are stepping up to help them.
TUCSON, AZ・6 DAYS AGO
KGUN 9 Tucson News

Tempe schools to phase out police officers on campus

Every year, over 15,000 people in Tucson and Pima County call 911 to report domestic violence. "We know that only about 1 in 10 cases even get reported. It's a humongous problem in this community," said Emerge Center Against Domestic Abuse CEO, Ed Mercurio-Sakwa.
TUCSON, AZ・6 DAYS AGO
KGUN 9 Tucson News

Throughout the month, the Pima Association of Governments is holding its annual bicycle and pedestrian count. Volunteers and PAG workers are placed in certain locations across Tucson and surrounding areas. The count started on October 11 and will continue until November 7.
TUCSON, AZ・4 DAYS AGO
KGUN 9 Tucson News

One Tucson non-profit is offering incentives to remote workers to pack up and start a life in Tucson.
TUCSON, AZ・5 DAYS AGO