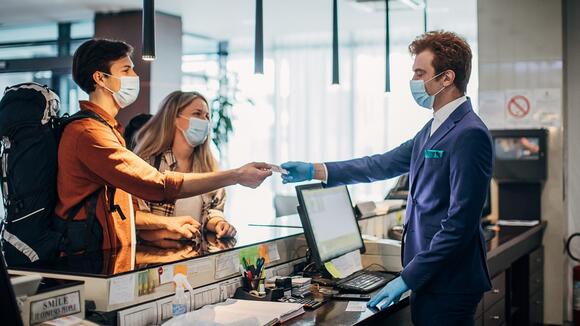 The spreading Delta variant has thrown a wrench into America’s job recovery. The August jobs report was a big disappointment, adding just 235,000 new jobs and falling far short of the Dow Jones expectation of 720,000, as previously reported by GOBankingRates .

Take Our Poll: Are Workers Really Holding Out For Better Jobs?
Explore: The Top 10 Fastest Growing Jobs in the Next 10 Years

However, some industries have recently experienced significant growth, as indicated by Monster’s Fall 2021 Hiring Report. Take a look at what the employment website had to say regarding key sectors that could see a big boost in opportunities in the autumn months:

Hiring demands have picked up despite losses initially in March and April of last year. The Bureau of Labor Statistics (BLS) July jobs report showed that the sector has recovered 92.9% of its jobs since the pandemic began, with hiring expected to gain speed as the holiday season approaches.

With tech being especially critical in today’s remote environment, computer and technology jobs are projected to increase by 11% between 2019 and 2029, according to the BLS.

As one of the fastest-growing sectors, the BLS projects healthcare will add 2.4 million new jobs from 2019 to 2029. Gains were most notable in ambulatory health care services and hospitals, seeing 37,000 new jobs in July alone. Monster data also showed strong job posting growth in new healthcare (23%) and healthcare support (18%).

August’s jobs report showed an increase in hiring, with 73,000 jobs added in this sector, especially among white-collar industries, according to Monster data. There’s also been strong interest from those looking for a safe working environment, flexible hours and higher pay.

The housing market has been booming, creating greater demand for hiring in the building sector. Job postings within construction and extraction grew in July by 7% on Monster alone. Construction hiring is expected to continue into the fall and new year.

Retailers have ramped up hires as consumers gain the confidence to go out and spend. Monster has seen an increase in new job postings for sales and other related positions, as well. Retail salesperson and cashier hires increased by 32% month-over-month in July.

Discover: 10 Unexpected Jobs You Can Do From Home

Although employment is still down by 1.7 million as of July, hiring in these industries has increased for most of 2021. BLS data from July showed gains of 380,000 jobs in bars, restaurants, hotels, casinos and amusement parks. Monster data also saw increases within food preparation and serving (17%), as well as personal care and service (16%).

Jobs in these sectors range widely from mechanics to HVAC professionals. New jobs posted on Monster in July increased by 11% among the top new job listings. Growth in the extremely popular field of wind turbine technicians is expected to increase by 61% from 2019 to 2029, as well.

Hiring rates in manufacturing have been growing since the start of the pandemic. About 27,000 payrolls were added in July, according to BLS data; however, Monster data shows that hiring rates are gaining momentum as we go into fall. New jobs posted on Monster increased by 10% month-over-month, especially for inspectors, testers, sorters, weighers, welders and cutters.

In July, insurance sales agents, accountants, auditing clerks and financial analysts were some of the top new jobs posted on Monster. The BLS July jobs report showed an increase of 22,000 jobs , mostly in real estate and rental and leasing.

This article originally appeared on GOBankingRates.com : Despite Poor Job Growth Overall Amid Delta Variant, These Industries Are Seeing Notable Gains

Consumer Confidence Index Up Slightly, But Indicates Many Are Proceeding With Caution

The Consumer Confidence Index report was revealed this morning, showing a welcome increase after three straight previous months of declines. The Index now stands at 113.8, up from 109.8 in September,...
ECONOMY・11 HOURS AGO
GOBankingRates

Treasury Secretary Janet Yellen said she doesn't expect inflation levels to fall before the middle or the end of next year. Her remarks come amid increasing concerns about supply chain bottlenecks and...
BUSINESS・1 DAY AGO
GOBankingRates

Workers vs. Retirees: A Look at How Their Financial Plans and Concerns Are Worlds Apart

When you retire, you enter a new financial phase of life -- so it makes sense that your financial plans and concerns would be different than they were during your time in the working world. A recent...
INCOME TAX・16 HOURS AGO
Worcester Business Journal

Supply chain disruptions and labor shortages are continuing to hold back economic growth, but index readings released Monday show the Massachusetts economy in expansionary territory for a sixth straight quarter and four straight quarters of growth for the U.S. economy. Citizens said its national Citizens Business Conditions Index finished the...
BUSINESS・11 HOURS AGO

OGDEN — It’s a really good time for economic expansion in Northern Utah says Chris Roybal, president and CEO of the Northern Utah Economic Alliance. As of September, the state’s economy added a cumulative 53,600 jobs since the same time last year, according U.S. Bureau of Labor Statistics. The most...
UTAH STATE・23 HOURS AGO
wincountry.com

BEIJING (Reuters) -Profits at China’s industrial firms rose at a faster pace in September even as surging raw material prices and supply bottlenecks squeezed margins and weighed on factory activity. Profits jumped 16.3% on-year to 738.74 billion yuan ($115.72 billion) the statistics bureau said on Wednesday, quickening from the 10.1%...
ECONOMY・1 HOUR AGO
CNN

New York (CNN Business) — America's worker shortage is alive and well, much to the misfortune of US companies that need staff to keep up with demand. The National Association of Business Economics (NABE) found that nearly half — 47% — of respondents to its Business Conditions Survey reported a shortage of skilled workers in the third quarter. That's up from 32% reporting shortages in the second quarter of the year, which already was too high for comfort. And nobody thinks the labor shortages will just disappear as 2021 turns to 2022.
ECONOMY・1 DAY AGO
Springfield News Sun

The ‘Great Mismatch:’ Why aren’t companies with record openings connecting with applicants?

Concern grows about the economic impact as jobs go unfilled. Job postings flood the internet and help wanted signs are everywhere as companies struggle to fill job openings from a labor force with far fewer people than before the COVID-19 pandemic. The increased popularity of online job application and resume...
ECONOMY・2 DAYS AGO

Supply chain issues played a major part in VF Corp. announcing quarterly earnings Friday that were lower than analyst estimates, but company leaders said they expect strong growth over the next six months, particularly from some of their smaller brands. The Denver-based apparel giant (NYSE: VFC) reported $3.2 billion in...
RETAIL・1 DAY AGO
WMAR 2 News Baltimore

California's job growth slowed last month, and its unemployment rate remained high as the state, still pummeled by the COVID-19 Delta variant, struggled to recover economic momentum. Many workers were reluctant to return to their jobs because the virus was circulating in schools and businesses, or because they were looking...
CALIFORNIA STATE・4 DAYS AGO
ABC 4

UTAH (ABC4) – As the pandemic caused dramatic decreases in unemployment across the nation, the state of Utah has seen growth despite the hardships. A new report released by the Department of Workforce Services tracks the period between September 2019 to September 2021. In those 24 months, Utah’s (nonfarm) payroll enrollment has increased by 3.4%.
UTAH STATE・4 DAYS AGO
24/7 Wall St.

This Is the Occupation With the Oldest Workers

More and more people are working into their later years, according to the Bureau of Labor Statistics. Many Americans don’t have enough money to retire, at least if they want to keep their current financial lifestyles. People who want to live as they have need to remain employed full time. This has several consequences. Among […]
ECONOMY・5 DAYS AGO
Crain's New York Business

City does not see boost in jobs growth despite reopening economy

Hundreds of shows lit up Broadway in September. New restaurants launched, more commuters headed to offices, schools and universities held in-person learning, and the federal supplemental unemployment insurance program came to a halt. But those long-awaited turning points did not provide a jolt to the city’s employment numbers. Total employment...
ECONOMY・5 DAYS AGO
nationalmortgageprofessional.com

A study conducted by TransUnion, which explores the creditworthiness of low-to-moderate income consumers, revealed that the segment represents a $300 billion growth opportunity for the mortgage industry. The mortgage industry is constantly trying to uncover ways to grow market share and revenue. The latest possible growth opportunity presents itself as...
REAL ESTATE・7 DAYS AGO
Mercury News

When the government released the September jobs report, my heart sank. The economy added 194,000 new positions, 300,000 fewer than expected, the smallest gain since December 2020, and lower than the upwardly revised 366,000 in August. After talking to a bunch of economists, I. learned that the news was not...
BUSINESS・8 DAYS AGO
KTLA

One reason America’s employers are having trouble filling jobs was starkly illustrated in a report Tuesday: Americans are quitting in droves. The Labor Department said that quits jumped to 4.3 million in August, the highest on records dating back to December 2000, and up from 4 million in July. That’s equivalent to nearly 3% of the workforce. […]
ECONOMY・14 DAYS AGO
The Motley Fool

Americans Are Quitting Their Jobs in Record Numbers. Here's Why

In increasing numbers, American workers are leaving their jobs. As long as there have been employees, employees have felt powerless. For the most part, it's been the farm, factory, and business owners who've called the shots. Owners set the pay and work conditions. Employees showed up, did their best, and knew they could be let go at any time.
SMALL BUSINESS・2 DAYS AGO
CBS News

3 states lead the U.S. in the rate of workers quitting their jobs

A record number of Americans are quitting their jobs across the U,S., a trend some have dubbed the "Great Resignation." But the phenomenon is making an outsized impact in some regions: In Georgia, Kentucky and Idaho, more than 4% of workers voluntarily left their jobs in Augus — the highest rates in the country.
ECONOMY・1 DAY AGO
WWLP

22News explains where training STEM career opportunities are, and how fast these jobs are growing.
MASSACHUSETTS STATE・4 DAYS AGO