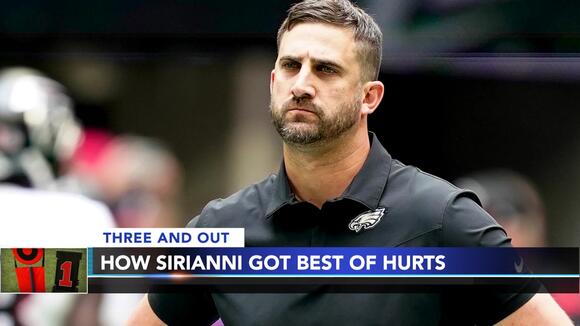 The Philadelphia Eagles host the San Francisco 49ers in the Birds' home opener, Sunday at 1 p.m. Before kickoff, our football guy and Eagles legend Ron Jaworski goes three deep on the Birds, looking back at the brilliance of head coach Nick Sirianni in Atlanta, and the threat posed by the incoming Niners. 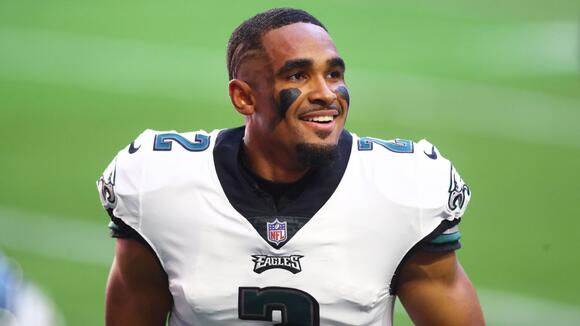 They won't all be as easy as Week 1's win. But for one game, the Birds had the look of a team fans can believe in.

1st Down: How Nick Sirianni brought out the best in QB Jalen Hurts 2nd Down: How the Eagles reclaimed their identity in the trenches 3rd Down: Biggest concerns on offense and defense facing the Niners Jaws' Player of the Game: Dallas Goedert Jaws' Prediction: Eagles 31, Niners 28

Eagles head coach Nick Sirianni sat down and searched for a documentary about Hall of Fame Sixers guard Allen Iverson. A self-described “basketball nerd,” Sirianni was always interested in the way that Iverson played, watching how the 6-foot guard from Georgetown was able to shake off defenders, using his lethal crossover in the process to get to the basket.
NBA・12 DAYS AGO
94 WIP Sports Radio

In the latest Go Birds! Pod, James Seltzer and Eliot Shorr-Parks discuss the Eagles' latest loss, a 28-22 defeat on Thursday night to the Tampa Bay Buccaneers. It was a loss where once again the offense struggled, which raises the question -- six games into the season, who is a bigger concern, Nick Sirianni or Jalen Hurts?
NFL・6 DAYS AGO
inquirer.com

What we learned from Eagles-Bucs: Don’t be surprised by Nick Sirianni’s slow start

The final score might have reflected a close game -- and the Eagles did fight to the end -- but the Buccaneers were in control most of Thursday night before leaving Lincoln Financial Field with a 28-22 victory. The 2-4 Birds still have myriad issues, but could use this weekend’s mini-bye to address deficiencies across the board.
NFL・5 DAYS AGO
bleedinggreennation.com

Eagles News: The Nick Sirianni-Jalen Hurts marriage might be short-lived

Let’s get to the Philadelphia Eagles links ... Burn it down. The case: It’s only been six games, but it’s already clear the Sirianni-Hurts marriage is going to be short-lived. If Hurts isn’t good enough as a passer to give the team an accurate read on Sirianni’s offense and if Sirianni’s offense isn’t tailored enough to Hurts’ skill set to allow for an accurate assessment of him as the quarterback of the future, the Eagles risk having no answers by the end of the season. Even if they could somehow sneak into the playoffs, it’s not like they’d be anything more than cannon fodder. And who are we kidding? This whole thing is about tearing things down for a rebuild that can start in earnest next offseason with three possible first-round picks and most likely four picks in the top 50. Anyone who’s not in the team’s long-term plans should be available. Goedert? Is the team really going to give him a high-priced extension when he’s never really been a No. 1 tight end? If someone’s willing to pay a premium, say a third-round pick, go for it. How about Miles Sanders? He’s barely used in the offense to begin with, and there’s no way the team is going to sign him to a second contract. Let him go, too. And if trading away some of these players makes the team worse in the short run, all the better for draft-pick purposes. Sirianni’s best attribute as a coach seems to be his ability to get the team to play hard, so there should be no concerns about the locker room checking out even in a firesale. It’s a dirty business, but one the Eagles have to be willing to play.
NFL・6 DAYS AGO

The Philadelphia Eagles aren’t as bad as their 1-3 record suggests, but they could be a lot better. There are many reasons for their rollercoaster start to the season, but one of the more perplexing has been the lack of attention to running the ball. The more time passes, the more questions arise, and the more signs remind fans of an era they’d hoped to have forgotten by now.
NFL・14 DAYS AGO
Yardbarker

Nick Sirianni needs to take the strain off Jalen Hurts

Is it time for the Eagles to set Jalen Hurts free? Since the beginning of the season, Nick Sirianni and the offensive staff have been focused on maximizing the abilities of Jalen Hurts but in doing so they may be hurting the second-year QB. Hurts and the offense lead the league in the most RPO plays ran, but is that a good thing?
NFL・7 DAYS AGO
Yardbarker

The Philadelphia Eagles improved to 2-3 with a road victory over the Carolina Panthers on Sunday. The game certainly won’t go down as an all-time classic. The momentum swung throughout the afternoon on five combined turnovers, 15 total penalties, an ugly safety, a wildly misdirected punt, and a blocked punt that set up the game-winning drive.
NFL・9 DAYS AGO
Delaware County Daily Times

PHILADELPHIA — The best Nick Sirianni could do Friday was to continue to have the back of veteran offensive tackle Lane Johnson, who is dealing with a personal matter and won’t be around Sunday when the Eagles hit the road to oppose the Carolina Panthers. There is a reason Johnson...
NFL・13 DAYS AGO

On a fourth quarter touchdown drive that cut the Buccaneers’ lead to six points, the Eagles handed the ball to Miles Sanders three times for a combined gain of 40 yards. It was an unusual amount of work for Sanders to get. He only carried the ball nine times all game as the Eagles continued to eschew designed runs for running back in favor of RPOs that call for quarterback Jalen Hurts to make calls on the fly. Just one of those carries came in the first half while the Bucs were building a 21-7 lead and running 40 offensive plays to just 22 for the Eagles.
NFL・6 DAYS AGO
chatsports.com

Nick Sirianni met with reporters on Monday afternoon to talk about the team in the aftermath of their Week 5 win over the Carolina Panthers. It was pointed out that Sirianni was wearing Johnson’s number on his visor on Sunday, and the head coach was asked whether that was indicative that the veteran would miss considerable time. He noted that he just wanted the guys — Brandon Graham, Isaac Seumalo, and Johnson — to know that they were a part of the team effort and were there with them in spirit.
NFL・10 DAYS AGO
bleedinggreennation.com

Let’s get to the Philadelphia Eagles links ... League sources said Thursday that, after Sunday’s blowout loss to the Chiefs, Eagles rookie coach Nick Sirianni blistered his defensive coaching staff in meetings early this week. He targeted rookie coordinator Jonathan Gannon in particular. Sirianni is frustrated at Gannon’s toothless, amorphous scheme; Gannon’s timid calls; and Gannon’s poor utilization of star players like defensive tackle Fletcher Cox and Darius Slay. “It was some tough conversations in the defensive room this morning,” Sirianni said Monday. This, according to the sources, was an understatement. Sirianni was mad. But it sounds like Gannon didn’t get the message. Gannon’s defense hasn’t defended much of anything in three weeks (the 49ers didn’t score much because quarterback Jimmy Garoppolo was awful). Still, on Tuesday, Gannon insisted Cox is playing fine; but this is demonstrably untrue, partially due to how Gannon uses him. Gannon also said that, for the moment, he won’t put a sixth defensive back on the field, even if a dynamo like Tyreek Hill might go virtually uncovered, which is essentially what happened on the Chiefs’ second touchdown Sunday.
NFL・12 DAYS AGO
NBC Sports

Nick Sirianni's plan for Miles Sanders appears to be throw the ball every snap for most of the game until you're down a couple touchdowns and then, once you're desperate and nothing else is working, give him a couple carries just for the heck of it and then realize ... "Oh, wait, he's pretty good, isn't he."
NFL・6 DAYS AGO

PHILADELPHIA (KYW Newsradio) — It wasn't pretty, but the Eagles found a way to win against Carolina on Sunday. And for much of the game, the Eagles definitely didn't play well, but their defense kept them in it. They were 30 minutes of football away from a 1-4 record. It...
NFL・10 DAYS AGO
burlingtoncountytimes.com

PHILADELPHIA – Eagles coach Nick Sirianni will no doubt get asked after every game why he doesn't use Miles Sanders more. That won't change until Sanders carries the ball 30 times in a game, just as Earl Campbell used to do in the 1970s with the Houston Oilers. In other...
NFL・6 DAYS AGO
crossingbroad.com

Nick Sirianni Didn’t Have a Lot of Postgame Answers

The Birds’ offense looked pretty putrid on Thursday night. They didn’t try to establish the run. Jalen Hurts was mostly inaccurate. They scraped together some late points and made it close, but the score doesn’t exactly tell the story of an otherwise lopsided game. Let’s go through some of Nick...
NFL・6 DAYS AGO
The Spun

The Philadelphia Eagles’ comeback efforts against the Tampa Bay Buccaneers last night fell short due in part to a highly controversial fourth quarter taunting call against Eagles defender Genard Avery. But Eagles head coach Nick Sirianni isn’t putting the blame on Avery – or the officials. Speaking to the media...
NFL・6 DAYS AGO
cbslocal.com

Eagles’ head coach Nick Sirianni spoke to reporters on Wednesday morning, just a day before they take the field against the Buccaneers on a short week, and talked about his messaging to the team, how the coaches started preparing on Sunday night, and what their teaching points are for Jalen Hurts when he runs the ball.
NFL・8 DAYS AGO
Yardbarker

Is it time to consider Jalen Hurts or Nick Sirianni to be fool’s gold?

There was plenty of talk coming into the season about how the Eagles’ offense could potentially look with Jalen Hurts at the helm. The idea was an alluring one. But as the weeks go by and both Hurts and Sirianni continue to say all the right things, it’s fair to wonder if there is some bite behind the bark.
NFL・3 DAYS AGO