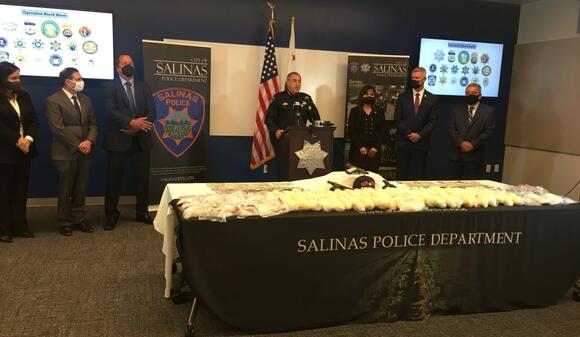 SALINAS, Calif. (KION-TV) -- More than $1 million dollars worth of illegal drugs are now off the streets in Monterey County, thanks to a multi-agency effort led by the Salinas Police Department.

Police say the bust is in connection to a trucking company registered out of Salinas, Nor Cal Transportation, that is suspected of trafficking drugs between the city and Yuma County, Arizona.

The investigation, given the name "Operation Black Hawk", started 5 months ago. Police say multiple traffic stops and search warrants led to the seizure of $1.8 million dollars worth of drugs. Including:

"One of the major traffic stops we recovered 50 pounds of methamphetamine along with the fentanyl pills inside of a spare tire," Investigation Commander Jim Arensdorf said during a press conference Thursday morning. "That was being transported from Yuma en route to the Monterey County area."

Investigators also seized 9 firearms and $90,000 in cash and cashier's checks.

"This investigation had a huge financial seizure. Not the type that we have typically seen in Monterey County," said DEA Special Agent Shawn Foust. "Pharmaceutical drugs that are counterfeit and contain fentanyl have been seen all across the county in overdose cases, and it's a direct result of this kind of fentanyl."

On September 9, the Salinas Police Department and assisting agencies served five search warrants in Salinas. At the same time, four search warrants were executed in Yuma County. Eight people have been arrested so far, on charges of conspiracy to transport and distribute narcotics, firearms possession and conspiracy to commit murder. Investigators believe they have been working directly with a Mexican cartel and Salinas gang leaders.

"In recent years, communities throughout Monterey County have seen an uptick in tragic overdose deaths," said Pacioni. "The results of this investigation mark a blow to those who profit over life and make clear law enforcement's commitment to reversing the tide of the opioid epidemic and holding its perpetrators accountable."

More than 170 law enforcement personnel from multiple agencies have been working together on this investigation. Salinas police say the investigation is ongoing and there may be more arrests in the future. They are also still investigating the suspects' ties to Mexico.

Salinas Police find a dead man near the creek

Monterey County Sheriff Bernal will not be running for re-election

A judge has blocked an order that was set to take effect this week that required California prison employees to be vaccinated against COVID-19. The post Judge blocks vaccine mandate for California prison guards appeared first on KION546.
CALIFORNIA STATE・4 DAYS AGO
KION News Channel 5/46

One victim dead, another recovering from a double shooting in Soledad

SOLEDAD, Calif. (KION) Soledad Police is investigating a double shooting that happened Sunday night, leaving one victim dead and another recovering in the hospital. According to police, an officer responded to a shooting Sunday at 8 p.m. in Iris Place in the San Vincent Townhomes. When they arrived, officers found two victims and were told The post One victim dead, another recovering from a double shooting in Soledad appeared first on KION546.
SOLEDAD, CA・7 DAYS AGO

SOLEDAD, Calif. (KION) - Authorities in Soledad are investigating a double homicide where one person was killed and another injured on Sunday. According to authorities, around 8 p.m. Officers responded to reports of shooting in the 100 block of Iris Place. Upon arriving at the scene, officers located two victims and informed them of two The post Soledad shooting leaves 1 dead, 1 injured appeared first on KION546.
SOLEDAD, CA・7 DAYS AGO
KION News Channel 5/46

Hollister mourned the death of young Jonathan Maciel, who was the victim of homicide, in an event prior to the officer-involved shooting of a Salinas Police Department officer this week. The post Jonathan Maciel’s family mourns the loss of their 19-year-old son appeared first on KION546.
HOLLISTER, CA・9 DAYS AGO
KION News Channel 5/46

Meth addict caught behind a Walgreens in Santa Cruz

Santa Cruz Police found a male subject behind the Walgreens on Soquel with a metal crowbar next to him Tuesday morning. The post Meth addict caught behind a Walgreens in Santa Cruz appeared first on KION546.
SANTA CRUZ, CA・12 DAYS AGO
KION News Channel 5/46

Suspects from San Mateo arrested for narcotics and firearm possession

SANTA CRUZ, Calif. (KION) The Santa Cruz Police Department arrested two people from San Mateo for possessing drugs and weapons in their vehicle on Saturday. Police said they conducted a high-risk traffic stop on Saturday after receiving reports of a brandished firearm. During the search, officers found two self-made rifles, an unregistered handgun, more than 32 grams of cocaine, 15 grams of methamphetamine, along with scales and packaging for selling controlled substances.
SANTA CRUZ, CA・13 DAYS AGO
KION News Channel 5/46

Man accused of setting fire at his own home, displacing four people

A Monterey man has been arrested after setting fire to the duplex he was living in, leaving four people displaced. The post Man accused of setting fire at his own home, displacing four people appeared first on KION546.
MONTEREY, CA・10 DAYS AGO
KION News Channel 5/46

The Pacific Grove Police Department confirms they're investigating reports of deposited checks being stolen from multiple banks in the city. The post Pacific Grove Police looking for man accused of stealing checks from banks appeared first on KION546.
PACIFIC GROVE, CA・10 DAYS AGO