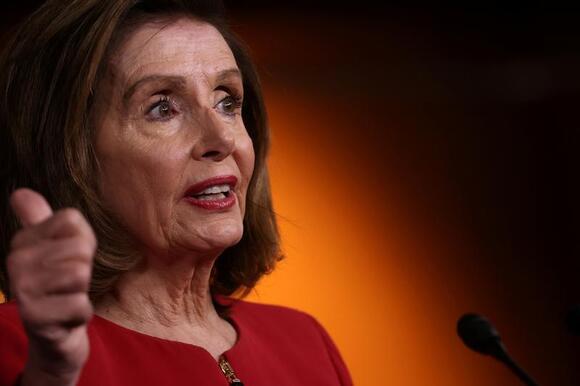 (Reuters) - Former U.S. President Donald Trump might make another White House run in 2024, but if he does, he will take his place in American history as a two-time loser, House of Representatives Speaker Nancy Pelosi predicted on Thursday.

Visiting England for a meeting of parliamentary leaders from G7 countries, the Democratic leader was asked during a forum to reflect upon the two impeachment proceedings she initiated against Trump late in 2019 and in January 2021.

Seizing an opportunity to score a political point against the man who continues to be the most powerful force in the Republican Party, Pelosi proclaimed, “I don’t ever talk about him.”

However, she continued to talk about Trump, though not by name.

“I reference him from time to time as ‘What’s His Name,’” Pelosi said, quickly adding: “If he wants to run again, he’ll be the first president who was impeached twice and defeated twice.”

Her remarks were met with loud applause from the largely British audience.

Throughout Trump’s four years in the White House, Pelosi tangled with the president over immigration policy, infrastructure investments, the pandemic response and a wide range of other domestic and foreign issues.

She gained a reputation of being eager to skewer the hard-hitting Trump and became one of the biggest thorns in his side as she initiated not one, but two impeachment proceedings against him.

The former president is already playing a role in the 2022 midterm elections for Congress by recruiting challengers to Republican lawmakers he has tangled with. And Trump has dropped numerous hints he might seek the presidency for a third time in 2024.

“I say to my Republican friends, and I do have some, ‘Take back your party,’” Pelosi said. “You have now been hijacked by a cult that is just not good for our country.”

so many more people will vote republican in 24, there are so many democrats that have flipped because of the current administration

They are rigging elections, but letting soooo many immigrants in. They dont care about the health and well being of them. They just want the votes

This old lady needs to find a nice rocking chair she can spend her days on. She’s definitely becoming one of those deteriorating oldsters that become very nasty. And difficult to be around.

It cites earlier rationale for rejecting claims in turning these new ones down. Here's the deal: President Joe Biden has rejected two additional requests by former President Donald Trump to shield sets of documents from the panel investigating the Jan. 6 insurrection, according to a new letter obtained by POLITICO.
PRESIDENTIAL ELECTION・1 DAY AGO
evalleytimes.com

Democratic Speaker of the House of Representatives, Nancy Pelosi, He said Sunday that lawmakers from his party could compromise next week on the broader reforms that US President Joe Biden wants. “We are almost therePelosi told the CNN channel. Asked if an agreement would be reached in a week, he...
PRESIDENTIAL ELECTION・2 DAYS AGO
The Independent

Mark Meadows, the former White House chief of staff, has predicted that Donald Trump would run for presidency again in 2024. “I don’t speak for [former] President Trump, but I do speak to him all the time, and I can tell you if I were a betting man, I would bet, I would go all in on the fact that he’s going to run,” the former Congressman told right-wing media organisation Breitbart News Network.Mr Meadows criticised the Joe Biden administration and added that Americans were not happy with the current government.“I go all over the country, and people are...
PRESIDENTIAL ELECTION・1 DAY AGO
Reuters

"Why would I tell you that now?" Pelosi told CNN's Jake Tapper while laughing. She went on to say she would discuss it with her family first.
CONGRESS & COURTS・2 DAYS AGO
News 8 WROC

There is one bright spot for Biden. He is eclipsing other presidents when it comes to confirming judicial nominees. The Senate has confirmed 16 district and circuit court judges as of Oct, 13, matching the combined total for Bush, Obama and Trump by that date.
PRESIDENTIAL ELECTION・1 DAY AGO
TheAtlantaVoice

House Speaker Nancy Pelosi on Sunday suggested that the budget reconciliation process could be one way toward raising the debt ceiling in December. “That’s one path. But we’re still hoping to have bipartisanship,” Pelosi told CNN’s Jake Tapper on “State of the Union.” In September, Pelosi previously said raising the debt ceiling would not be done through reconciliation as part […]
CONGRESS & COURTS・2 DAYS AGO
AFP

After months of fierce political wrangling, US House Speaker Nancy Pelosi said Sunday she expects agreement on a huge social spending package and a vote on a cross-party infrastructure bill this week, adding: "We're almost there." President Joe Biden had been intent on securing passage of the two mega-measures -- which Democrats see as vital to their party's political hopes in midterm elections next year -- before he leaves for a climate summit in Glasgow that opens October 31. And the White House noted "progress" was being made as Biden met with a key member of his party Sunday, a sentiment shared by the top Democrat in Congress. Asked on CNN's "State of the Union" whether the agreement on the spending package and votes on infrastructure could occur in the coming week, Pelosi replied, "that's the plan."
CONGRESS & COURTS・2 DAYS AGO

The White House as of Friday was refusing to go above $150 billion for housing, according to two people familiar with the talks.
CONGRESS & COURTS・3 DAYS AGO
POLITICO

The former nominee to serve as White House budget director will keep her current title as senior adviser to the president.
POTUS・4 DAYS AGO
AL.com

Tuberville says ask Nancy Pelosi, ‘Were you warned?’ about Jan. 6 riots at Capitol

In his weekly press briefing Wednesday, U.S. Sen. Tommy Tuberville answered a question about the House select committee investigating the Jan. 6 attack on the U.S. Capitol. “I want to know what we knew,” Tuberville said. “Hopefully, they get Nancy Pelosi and put her on the stand and ask her, ‘Did you know? Were you warned by the FBI?’ Because you, Nancy Pelosi, are in charge of the Capitol. You’re in charge of the security of the Capitol. We never hear anything like that.”
CONGRESS & COURTS・6 DAYS AGO
Washington Post

What Biden told lawmakers at the White House

Good morning, Early readers. Vice President Harris turns 57 today (and shares a birthday with Snoop Dogg). Tips, comments, more leaked invitations to fundraisers? Don't be shy: earlytips@washpost.com. Thanks for waking up with us. At the White House. What Biden told lawmakers at the White House. You might need to...
PRESIDENTIAL ELECTION・6 DAYS AGO

Schumer to meet with Pelosi, White House on Biden agenda

Judge Jeanine Pirro questioned who was really in charge of the White House Saturday on "Justice with Judge Jeanine." JUDGE JEANINE: In case you didn’t know it, Joe Biden is the president of the United States in name only. Someone else is running the White House. Barack Obama, maybe? Come along with me and see if what I say makes sense. Now, from the beginning of his campaign, we knew he wasn’t right. We kept asking ourselves what was wrong with him. He was clearly confused, saying crazy things.
U.S. POLITICS・9 DAYS AGO
POLITICO

Here's our running list of who's going to the White House to meet with Joe Biden on Tuesday.

He'll hold separate meetings with moderates and progressives as talks on his reconciliation bill reach a crucial point. Who's invited: Our Nicholas Wu and Sarah Ferris have a list of the House members going to the White House on Tuesday for high-stakes meetings on President Joe Biden's agenda. There are separate meetings for House moderates and progressives.
PRESIDENTIAL ELECTION・8 DAYS AGO
New Jersey 101.5

A New Jersey congressman who was elected as a Democrat but switched parties in 2019 is emerging as one of the strongest supporters of Donald Trump taking another run at the presidency. Rep. Jeff Van Drew will also no longer acknowledge the legitimacy of Joe Biden's election as president and...
PRESIDENTIAL ELECTION・12 DAYS AGO
WashingtonExaminer

House Speaker Nancy Pelosi said she thinks a lot about what she would do if she "ruled the world." The California Democrat made the comment on Monday after she accepted the Women For Peace and Security Award at the 67th annual Session of the NATO Parliamentary Assembly in Lisbon, Portugal.
CONGRESS & COURTS・14 DAYS AGO
CNBC

President Joe Biden will designate FCC acting Chair Jessica Rosenworcel as permanent chair and nominate her to another term on the commission, the White House said Tuesday. He also plans to name former FCC official Gigi Sohn to fill the agency's fifth commissioner slot and Alan Davidson of Mozilla as assistant secretary for communications and information at the NTIA.
PRESIDENTIAL ELECTION・8 HOURS AGO
Democrat-Herald

What's a 'wealth tax' and how would it work?

To help pay for his big economic and social agenda, President Joe Biden is looking to go where the big money is: billionaires. Biden never endorsed an outright "wealth tax" when campaigning last year. But his more conventional proposed rate hikes on the income of large corporations and the wealthiest Americans have hit a roadblock.
PRESIDENTIAL ELECTION・10 HOURS AGO
Washington Post

The Trump International Hotel was a prime destination for hangers-on and favor-curriers during President Donald Trump’s term, but when it came to plotting a last-ditch effort to keep him in office, his team chose a more traditional Washington location for its “war room.”. For more than 150 years, the Willard...
PRESIDENTIAL ELECTION・5 HOURS AGO