'Tell us where Gabby is located': Petito's family pleads to fiance's family to bring her home safe 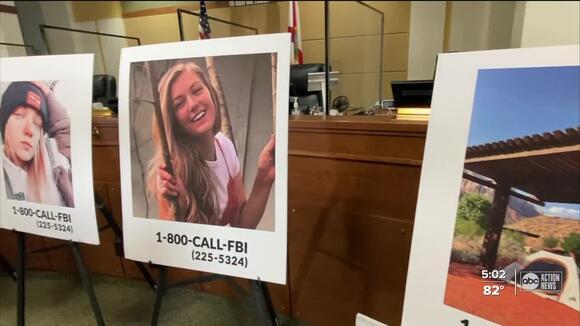 NORTH PORT, Fla. — As law enforcement agencies in multiple states, along with the FBI, continue to search for missing 22-year-old Gabby Petito; her family begged for help from her fiance's family to help locate her.

"Please, if you or your family have any decency left, tell us where Gabby is located. Tell us if we're even looking in the right place," attorney Rick Stafford said Thursday afternoon as he read from a letter from the family of Gabby Petito to the parents of her fiance Brian Laundrie.

In the letter, Petito's family said repeatedly they believed the family of Laundrie, "know the location where Brian left Gabby. We beg you to tell us."

Read the full letter below:

The Petito and Schmidt family's letter came hours after Gabby's father, Joseph Petito, appeared with North Port Police Thursday morning. Petito's father called on help from everyone including the parents, family, and friends of his daughter's fiance Brian, who was named a person of interest in her disappearance on Wednesday.

He pointed to a picture of Gabby and said, "there is nothing else that matters to me now. This girl right here, this is what matters. That is it. Anything else, it comes second to this."

Newly released body camera footage showed Gabby was mentally struggling during an encounter with police in Utah. Police in Moab City released the body camera video that shows a critical point in the timeline of the case. In the video, Petito appears upset, crying uncontrollably, as officers question her about an argument between her and her fiance Brian Laundrie that a witness called in.

In the video, Petito and Laundrie both admit to arguing all morning and that Petito had slapped him. You can see visible scratches on his face in the video, but both say neither intended to harm one another. Petito tells officers that she suffers from anxiety and OCD and was having a rough day. After more than an hour of questioning, officers concluded it was a mental-emotional break, rather than a domestic assault and no charges were filed.

However, Wednesday, North Port Police named Laundrie a person of interest and said he is refusing to talk to them. Laundrie’s family attorney, Steve Bertolino, said that’s because he's advised him not to speak.

Police say because this is still a missing person's case and not a criminal case, they can't force Laundrie to come in and speak to them. Police would need evidence of a crime.

“Our focus is to find Gabby. My focus isn’t to bring Brian in right now, it’s to find Gabby. Brian is exercising his constitutional rights and I have to respect that," said Chief Garrison.

Neighbors said they are tired of waiting. They held signs outside the Laundrie family home in North Port. The signs read, "Bring Gabby Home!" and "Speak up."

"I have three little girls if this was my daughter, I would go crazy," said neighbor Dena Sternquist.

Petito and Laundrie left a home in New York heading west on a cross-country road trip near the beginning of July. Gabby Petito documented much of the trip on her social media for her new blogging career. During a question and answer session Thursday afternoon, Stafford said the couple was engaged but had delayed the wedding because of COVID and instead went on the trip.

"It's my understanding they were engaged, with the pandemic, it was put on hold," Stafford said. "Then they went on the trip."

Stafford said from what he's been told, the couple was set to travel to Oregon by early October. The couple traveled through Utah and up to Wyoming. Petito's family says they talked to her on the phone on August 25 while she was at Grand Teton National Park. However, Stafford said Brian then showed up in North Port on September 1, alone and in her van and that his family knew that was not part of the schedule.

Thursday morning, North Port Police Chief Todd Garrison told ABC, “Two people went on a trip and one person returned and that one person is not talking to us. All of our information is being directed through the attorney and he’s got all the answers. My number one question is -- where’s Gabby?”

Petito's family says she never goes this long without some sort of contact.

“She would go off the grid out there doing her stuff, exploring the different areas, so it wasn't uncommon for her to go off for a few days at a time, but she would always make her way back to someplace she could get on to a WIFI connection, upload to an Instagram, make phone calls…” Petito's step-father Jim Schmidt said. “If there was something wrong, she would have contacted us.”

They are asking the country, between Wyoming and Florida, to help search for her. Chief Garrison said that they don’t have a crime as of now, so they aren’t searching Laundrie’s home.

The attorney representing the Laundrie family released the following statement on Wednesday.

"Many people are wondering why Mr. Laundrie would not make a statement or speak with law enforcement in the face of Ms. Petito's absence. In my experience, intimate partners are often the first person law enforcement focuses their attention on in cases like this and the warning that 'any statement made will be used against use' is true, regardless of whether my client had anything to do with Ms. Petito's disappearance. As such, on the advice of counsel Mr. Laundrie is not speaking on this matter.

I have been informed that the North Port, Florida police have named Brian Laundrie as a 'person of interest' in this matter. This formality has not really changed the circumstanced of Mr. Laundrie being the focus and attention of law enforcement and Mr. Laundrie will continue to remain silent on the advice of counsel."

Meantime, as the search for Gabby Petito continues, the Grand County Sheriff's Office in Utah announced Thursday it is "looking into any connection between the Gabby Petito missing person case and the double homicide that occurred in Grand County." The GCSO said it is "not ruling anything out at this time and appreciate the concerns of the public and their willingness to contact this office with those concerns."

If you have any information, you’re asked to call 1-800-CALL-FBI.

Two Tampa police officers helped to save a cow Friday, October 22, after it got its head stuck in a barrel at an FFA event.
TAMPA, FL・7 HOURS AGO
ABC Action News WFTS

Florida Highway Patrol troopers have dangerous jobs and yet, they’re among some of the lowest-paid law enforcement officers in the state.
SARASOTA, FL・8 HOURS AGO
ABC Action News WFTS

Brides across Tampa Bay are accusing a local florist of charging thousands of dollars for flowers that never made it to the wedding.
RELATIONSHIPS・2 DAYS AGO
ABC Action News WFTS

More guns have been stolen in St. Petersburg so far this year, than in all of 2020. The police department says many of those guns are taken from unlocked cars and are often used in shootings.
3 HOURS AGO
ABC Action News WFTS

An attorney says family members are hoping for more answers from law enforcement regarding the cause of death for Brian Laudrie, who was a person of interest in the death of girlfriend Gabby Petito.
PUBLIC SAFETY・5 DAYS AGO
ABC Action News WFTS

St. Petersburg community leaders, law enforcement, and residents came together Tuesday to talk about the rising homicide rate and gun violence in the city.
SAINT PETERSBURG, FL・1 DAY AGO

The ABC Action News I-Team has uncovered the preserve has a history of wildlife law violations, but neighbors say the state has not held anyone accountable.
POLK COUNTY, FL・2 DAYS AGO
ABC Action News WFTS

Halloween animatronics burn to the ground at St. Pete home

A St. Pete woman is hoping someone will come forward with information about who showed up at her house on Friday morning and set fire to three of her Halloween animatronics.
ENTERTAINMENT・3 DAYS AGO

The non-profit organization Experienced Autism Alliance is doing what it can to help limit the time a person is missing.
RIVERVIEW, FL・5 DAYS AGO
ABC Action News WFTS

A Pasco County community is honoring the life of a teacher they lost to COVID-19 complications last year, with a pumpkin patch, and all the proceeds are going back to the profession she loved so much.
4 DAYS AGO
ABC Action News WFTS

“I think that anytime you can give back to the community you have a deep feeling of satisfaction and connection to those you serve and those you serve with,” said Rebekah Jarvis
CHARITIES・5 DAYS AGO
ABC Action News WFTS

For the last five years, a local man has been volunteering at CASA Pinellas and taking on the role of being everyone's grandpa.
6 DAYS AGO