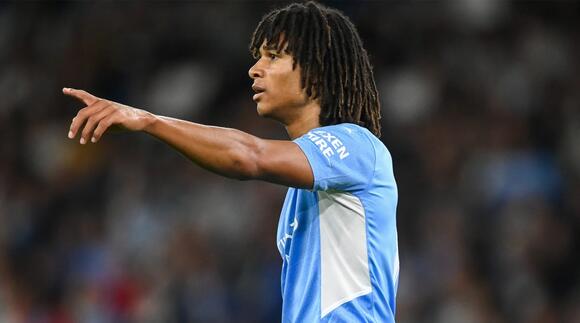 The Manchester City defender tallied the opening goal of Wednesday night’s 6–3 win over RB Leipzig, and his father died "minutes after" watching it happen.

The 26-year-old tallied the opening goal of Wednesday night’s 6–3 win over RB Leipzig, scoring his second goal for the club since joining in 2020. RB Leipzig posted its condolences on Twitter. His father died after being diagnosed with a terminal illness, Ake posted on his Instagram.

“The past few weeks have been the toughest of my life, my dad has been very ill and there was no more treatment possible. I was lucky to have a lot of support from my fiancé, family and friends," Ake wrote. “Yesterday after a difficult time I scored my first Champions League goal, and only a few minutes after he passed away peacefully with my mum and brother by his side.

“Maybe it was meant to be, watching me play always made him proud and happy. I know you're always with me, you will always be in my heart and this one was for you dad.”

Liverpool forward Mohamed Salah has enjoyed a brilliant start to the season and his form has led to him being hailed as currently the best player in the world.The Egypt international, who grabbed a hat-trick in Sunday’s 5-0 Premier League win at Manchester United has scored in every game bar one this campaign.Here, the PA news agency takes a closer look at Salah’s season so far.Form of his lifeSalah has scored 15 goals in 13 appearances. The only team to prevent him finding the net are Burnley, back on August 21. By comparison, in his first year at...
PREMIER LEAGUE・3 DAYS AGO
The Independent

Rio Ferdinand insists Ole Gunnar Solskjaer’s Manchester United lack an identity after their “embarrassing” 5-0 defeat to Liverpool.The Red Devils were humbled at Old Trafford on Sunday with the Norwegian now clinging onto his job after almost three years in charge.And speaking on his Five podcast, Ferdinand has opened up on what Solskjaer’s United are missing. “I’ve been there, we got beat 6-1 at home by Man City. But we had an identity to fall back on in a couple of weeks,” Ferdinand said. “This is the problem for this team, they’re struggling to find an identity and who they...
PREMIER LEAGUE・1 DAY AGO
goal.com

The red-hot forward has netted in five successive matches for Masandawana and he has now taken aim at Maniema. Mamelodi Sundowns striker Peter Shalulile has revealed his ambitions ahead of the Tshwane giants' 2021/22 Caf Champions League campaign. The Namibia international is arguably the hottest player in South African football...
SOCCER・14 DAYS AGO
SkySports

Pernille Harder scored for the second successive Women's Champions League match as her goal helped Chelsea beat Juventus 2-1 in Turin. The world's most expensive female player had netted a last-gasp equaliser against Wolfsburg last week to secure a point for Chelsea, and once again popped up with a vital goal on Wednesday.
WORLD・14 DAYS AGO

Manchester City are in Belgium this evening to take on Club Brugge in the Champions League. City sit third in Group A with three points from their opening two games, having thrashed RB Leipzig before being beaten by Paris Saint-Germain, and Pep Guardiola will be urging his team to earn another win here before the group stage’s midway point.Brugge are second after drawing with PSG before beating Leipzig, and they are proving the surprise package of the group so far. The reigning Pro League champions are currently second in the Belgian table on goal difference behind Union Saint-Gilloise, and manager...
PREMIER LEAGUE・8 DAYS AGO
chatsports.com

Liverpool go top of the Premier League after smashing FIVE past Watford in Claudio Ranieri's first match with Firmino, Mane and Salah all on target with the latter scoring a sensational solo goal

It feels a little like 2019. Crowds are back in stadia. A degree of normality has returned to life. And Liverpool look invincible. Specifically, Mohamed Salah look as though he can do just whatever he wants with the ball, score when he pleases like the best kid in a school game.
PREMIER LEAGUE・11 DAYS AGO
SB Nation

We had started to wonder if and when Armando Broja would finally get his chance in the Premier League from Ralph Hasenhüttl at Southampton. The young Chelsea loanee had scored twice for Albania this season already, and also twice for Saints in the League Cup. Meanwhile, Southampton were still looking for their first league win, after seven tries.
PREMIER LEAGUE・11 DAYS AGO
CBS Sports

In what is perhaps the most mouth watering tie of the week Atletico Madrid welcome Liverpool to the Spanish capital with top spot in Group B on the line on Paramount+. Jurgen Klopp's side have won both of their group stage matches so far and will be buoyed by the return of Fabinho and Alisson to the side that crushed Watford 5-0 in the Premier League on Saturday.
PREMIER LEAGUE・8 DAYS AGO

The UEFA Champions League group stage will reach its halfway point this week following Matchday 3 on both Tuesday and Wednesday. Eight games are on the slate for both days, with Tuesday highlighted by the clashes between Atletico Madrid and Liverpool, PSG vs. RB Leipzig, as well as Ajax vs. Borussia Dortmund. The action gets underway with two games at 12:45 p.m. ET, with the remaining six beginning at 3 p.m ET.
UEFA・8 DAYS AGO
Daily Mail

'Him and Foden will be running Manchester City's midfield soon enough': Fans heap praise on Cole Palmer after the teenager scores his first Champions League goal in victory against Club Brugge

Cole Palmer scored his first Champions League goal as Manchester City romped to a comfortable 5-1 victory away against Club Brugge. The 19-year-old came on as a 65th minute substitute for Kevin De Bruyne and made an immediate impact. Within two minutes, fellow substitute Raheem Sterling set up the youngster...
PREMIER LEAGUE・8 DAYS AGO
Yardbarker

Dejan Kulusevski’s goal for Juventus in their 1-0 win over Zenit Saint Petersburg is one that he enjoyed and the Swede says he would remember the strike for the rest of his life. That was his first goal in the Champions League for the Bianconeri and it was an important...
UEFA・7 DAYS AGO
USA Today

BARCELONA, Spain (AP) — It took one of Barcelona's veterans to keep the Catalan club from facing an early elimination in the Champions League. Gerard Piqué's first-half goal equaled a Champions League scoring mark for defenders and helped Barcelona edge Dynamo Kyiv 1-0 on Wednesday to end its losing streak and get back in position to advance to the knockout stage of the European competition.
UEFA・7 DAYS AGO
Sporting News

Give the ball to Kylian Mbappe and Lionel Messi and let them do the rest. PSG's used that strategy to success in a home Champions League match against RB Leipzig, coming from behind to win 3-2. Messi scored twice and Mbappe had a hand in all three goals with one goal, one assist and one drawn penalty.
UEFA・8 DAYS AGO
goal.com

Villarreal's Chukwueze scores within a minute into his Champions League debut

The Nigeria winger came off the bench to make an impact in the Yellow Submarine's emphatic away victory. Samuel Chukwueze sealed Villarreal's 4-1 triumph over Young Boys with his maiden goal in the Champions League on Wednesday. Chukwueze replaced Arnaut Danjuma in the 89th minute and he instantly registered his...
UEFA・7 DAYS AGO
SkySports

Cole Palmer grabbed his first Champions League goal as Manchester City produced a scintillating attacking display to beat Club Brugge 5-1 at the Jan Breydel Stadium. Heading into the game, there was an element of pressure hanging over Pep Guardiola's side following their 2-0 defeat at PSG last month. Club Brugge started the game one point ahead of the Premier League champions, but any pressure was quickly relieved as the visitors secured a 2-0 advantage going into the break thanks to Joao Cancelo's strike (30) and Riyad Mahrez's penalty (43).
PREMIER LEAGUE・8 DAYS AGO
firstsportz.com

It was a long time coming for the Barcelona fans, and they have had to wait for more than 200 minutes to see their side score the first goal of this year’s UEFA Champions League. Gerard Pique finally found the net as the Blaugranas took the lead against Ukrainian opponents Dynamo Kiev.
UEFA・7 DAYS AGO
ESPN

With Solskjaer in Limbo, Manchester United's Options Are Clear, If Not Risky

Ole Gunnar Solskjaer is safe as Man United manager, for now at least. But would the most likely candidates to replace him be the right fit for the job?
PREMIER LEAGUE・1 DAY AGO
Daily Mail

It is safe to say that Celtic fans have had to wait to see Giorgos Giakoumakis in action. But it looks like the wait might very well have been worth it as the Greek striker scored on his first start for the Hoops, against St Johnstone. Giakoumakis arrived on transfer...
SOCCER・4 DAYS AGO