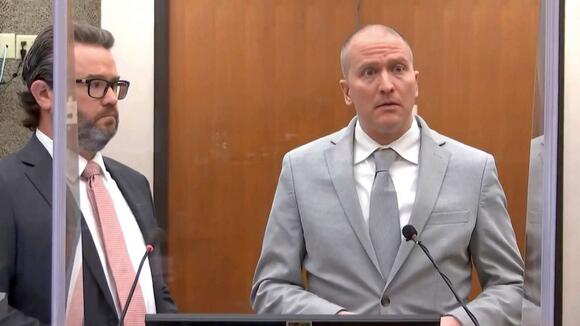 Derek Chauvin, the former Minneapolis police officer convicted of murder in George Floyd 's death, pleaded not guilty Thursday for allegedly violating the civil rights of a 14-year-old in 2017.

This indictment alleges that Chauvin deprived the teenager of his right to be free of unreasonable force. The indictment claims that Chauvin held the teen by his throat, hit him on the head with a flashlight and then kneeled on his neck and upper back as the teen was handcuffed and no longer resisting.

The restraint was similar to the one he used on Floyd and resulted in bodily injury for the teen, according to the indictment.

At least 18 complaints had been filed against Chauvin during his 19-year tenure with the Minneapolis police department, according to department records.

Floyd was killed in May 2020 after he was placed under arrest on the suspicion that he was using a counterfeit $20 bill to buy cigarettes at a convenience store.

In the Floyd murder trial, prosecutors presented evidence of Chauvin's history of restraining people by kneeling on their neck or upper back -- highlighting eight different incidences to the judge.

In Floyd's death, Chauvin was found guilty of second-degree unintentional murder, third-degree murder and second-degree manslaughter for pressing his knee against Floyd's neck for more than nine minutes. He was sentenced to 22 and-a-half-years in prison.

Chauvin and his fellow former officers Thomas Lane, J. Alexander Kueng and Tou Thao have also been charged with violating Floyd’s constitutional rights in ways that “resulted in bodily injury to, and the death of, George Floyd,” according to the federal grand jury indictment.

They all pleaded not guilty.

Pa. man, 44, pleads guilty to raping 12-year-old girl who had his baby: prosecutors

A Connellsville man is facing at least 10 years in prison when he is sentenced in a few months for the 2013 rape of a then-12-year-old girl in Derry Borough. Prosecutors say the girl gave birth to the man’s child. Shawn Tracy Melville, 44, entered a general plea Monday to...
PENNSYLVANIA STATE・8 DAYS AGO
WISN

MILWAUKEE — A mother says her daughter and two other people were shot dead in a fight over how a car was parked. The shooting happened at about 9:35 p.m. Thursday at North 8th and West Cherry streets in Milwaukee. Police said four people suffered gunshot wounds. The Medical Examiner...
MILWAUKEE, WI・7 DAYS AGO
CrimeOnline

Cops said the couple kissed and put their heads against each other before the boyfriend fired the gun against his girlfriend’s temple. Florida police have identified the couple who reportedly attempted to carry out a suicide pact last week which left a woman dead and her boyfriend hospitalized. Holly Hill...
RELATIONSHIPS・2 DAYS AGO
The Independent

The family of a Native American woman who shot dead her alleged rapist in what she says was self defence, has appealed to a federal judge who could jail her for almost 20 years.Maddesyn George, 27, who has an 18-month-old child, is due to next month appear before a judge who will determine her fate over an incident that happened last summer.On July 12 2020, on the Coleville Indian Reservation in eastern Washington state, Ms George shot and killed Kristopher “Buddy” Graber as he was approaching her car window. She has alleged Graber had raped her the night before and that she...
PUBLIC SAFETY・2 DAYS AGO

The father of a toddler who fatally shot his mother as she was on a Zoom call with coworkers has been charged in the case. Prosecutors say Veondre Avery, 22, is facing manslaughter and failure to securely store a firearm charges. He's accused of failing to securely store a gun after his 2-year-old son found the gun and shot 21-year-old Shamaya Lunn in the head in their home on Aug. 11.
SPRING VALLEY, NY・3 DAYS AGO
93.1 WZAK

White Man Accused Of Murdering 2, Including Cop, Isn’t Killed Even After Shootout With Another Officer

LIKE US ON FACEBOOK. FOLLOW US ON TWITTER AND INSTAGRAM. SUBSCRIBE ON YOUTUBE. A white man in Louisiana has been taken into custody alive after allegedly engaging in what police describe as a “multi-parish shooting spree,” during which he’s accused of fatally shooting two people, including a state trooper, wounding three other people and getting into a shootout with another police officer. All of this and the only gunshot wound the accused shooter reportedly sustained was a self-inflicted shot in the leg.
PUBLIC SAFETY・3 DAYS AGO
CBS New York

NEW YORK (CBSNewYork) – A 13-year-old faces attempted murder, assault and harassment charges after opening fire at a Bronx playground. It happened inside Hunts Point Playground just before 6 p.m. Thursday. Surveillance video shows the child, who appears to be holding a gun. Police say he got into an argument with another 13-year-old boy and shot him in the knee. Investigators said the boy ran from the scene with four other people. Police say the boy’s mother recognized him from the surveillance video and turned him in. The suspect has been released to his family’s custody pending his next court appearance.
BRONX, NY・2 DAYS AGO
The Independent

A former Nasa executive who was feuding with his next door neighbours has been found guilty of murdering one of them in what prosecutors described as “an execution”.Michael Hetle, 54, claimed he acted in self-defence when he rapidly fired seven shots into 24-year-old Javon Prather on his doorstep in March 2020 following a fight earlier in the day, saying he believed the younger man had a weapon.But a jury in Fairfax, Virginia rejected that argument after watching video from a Ring doorbell camera that showed the former police officer opening his door and immediately shooting the unarmed Prather at point...
PUBLIC SAFETY・2 HOURS AGO

An off-duty NYPD cop shot her ex-girlfriend and killed the woman’s new lover after catching the duo together at a Brooklyn home on Wednesday night, police and sources said. Yvonne Wu, 31 years old and a five-year veteran of the force, opened fire on the pair at the ex-girlfriend’s house on 19th Avenue near 79th Street in Bensonhurst at about 5 p.m., according to police and law enforcement sources.
BROOKLYN, NY・2 DAYS AGO
mountain-topmedia.com

PIKEVILLE, Ky. — A Knott County man and a Perry County woman have pleaded guilty to charges related to a pair of carjackings last year. Christopher Adam Cole, 33, of Littcarr, pleaded guilty to two counts of carjacking and one count of using a firearm during a crime of violence. The carjacking charges carry a potential sentence of up to 15 years in prison, while the gun charge carries a minimum sentence of at least seven years in addition to the carjacking sentence.
PERRY COUNTY, KY・3 DAYS AGO
CBS New York

NEW YORK (CBSNewYork) — An NYPD officer is facing murder charges after an apparent love triangle turned deadly. Police said 31-year-old Yvonne Wu, a five-year veteran of the force, was lying in wait at her ex-girlfriend’s home in Brooklyn when she shot her ex and the ex’s new lover, CBS2’s Jessica Moore reported Thursday. New video shows the chaos triggered when police say a scorned lover snapped. “It was two shots and I have never ever in all the years I’ve lived here in my life seen anything like this,” neighbor Pat Santi said. Cellphone video shows Wu being frisked by fellow police officers...
NEW YORK CITY, NY・1 DAY AGO

JayDaYoungan, a Louisiana rapper whose real name is Javorius Tykies Scott, was arrested for his alleged involvement in an August 2020 murder. Scott was arrested last month and booked on charges of accessory to second-degree murder and obstruction of justice, a Tangipahoa Parish representative told XXL. Scott posted a photo of himself from his Amite City jail cell, and the jail cell employee who took the picture was fired last week.
CELEBRITIES・11 DAYS AGO
FOX6Now.com Milwaukee

MILWAUKEE - A 22-year-old Chicago man accused of alleged abuse that led to the death of a 1-year-old boy in Milwaukee was due in court Wednesday, Oct. 13 for a preliminary hearing. The hearing was adjourned for, court documents show, and rescheduled for Nov. 5. Antonio Homan is charged with...
MILWAUKEE, WI・3 DAYS AGO
New York Post

A 14-year-old boy was shot as he jumped on a city bus to escape his attacker in Harlem Thursday morning, police said. A bullet grazed the teenager’s head as he was boarding the M1 bus on the corner of West 139th Street and Lenox Avenue just before 10 a.m., according to cops.
NEW YORK CITY, NY・1 DAY AGO
abc17news.com

MIAMI (AP) — A Florida man has pleaded guilty to phoning threats to kill a lawyer who represented the former Minneapolis police officer convicted in the death of George Floyd. The U.S. Justice Department said in a news release Thursday that 42-year-old William John Hartnett made the threatening call April 6 from Miami. Hartnett faces up to five years in prison at sentencing set for Dec. 15. He’s been charged with one count of transmitting a threat through interstate communications. Prosecutors said Hartnett called the Minnesota Police and Peace Officers Association, which was paying for ex-officer Derek Chauvin’s defense. The 18-second message included several threats against Eric Nelson, Chauvin’s lawyer.
FLORIDA STATE・8 DAYS AGO
kttn.com

The Braymer man charged with two counts of first-degree murder in Johnson County for the death of two Wisconsin men pleaded not guilty October 12 to a felony stealing charge in Division One of Caldwell County Circuit Court. Twenty-seven-year-old Garland Joseph Nelson waived formal arraignment. The case was continued to...
BRAYMER, MO・3 DAYS AGO
WTRF- 7News

CHICAGO (CBS)– A man has been charged with attempted murder after a mass shooting in Wicker Park that left one dead and four injured on Oct. 10. Police said Teanius Sykes, 35, was charged after he was identified as one of the offenders who fired shots in the 1500 block of North Milwaukee Avenue on Oct. 10. Sykes is facing felony charges including aggravated battery, reckless discharge of a firearm and unlawful use of a weapon. Sykes is expected in bond court on Wednesday. Shots were fired near dozens of shops and restaurants — at about 3:40 a.m. from a dark-colored vehicle, authorities said. A 32-year-old man was shot in the chest and pronounced dead at Stroger Hospital of Cook County. A 30-year-old man was shot in his left leg, a 22-year-old woman was shot in her right leg and a 25-year-old woman was shot in the back — all three victims were taken to Stroger and listed in stable condition. A 25-year-old woman was wounded in her left leg and was taken to Swedish Hospital in stable condition, police said.
CHICAGO, IL・2 DAYS AGO
CBS New York

NEW YORK (CBSNewYork) — The 18-year-old charged with shooting and killing his mother at their Staten Island home is due in court Friday. Adnan Pelinkovic faces charges including murder, attempted murder and criminal possession of a weapon. Investigators said it started when Pelinkovic got into a dispute with his parents on Oct. 9 at their home in the New Dorp section. According to the Staten Island district attorney’s criminal complaint, he allegedly told a detective “I shot at my dad” and “I did try to kill them,” CBS2’s Lisa Rozner reported. Police said officers found Minire Pelinkovic, 51, with a severe chest injury from being shot. She was taken to the hospital and pronounced dead. The teen’s father, identified as Enver Pelinkovic, 54, was found with a cut on his chest, but he refused medical attention, according to police.
NEW YORK CITY, NY・1 DAY AGO