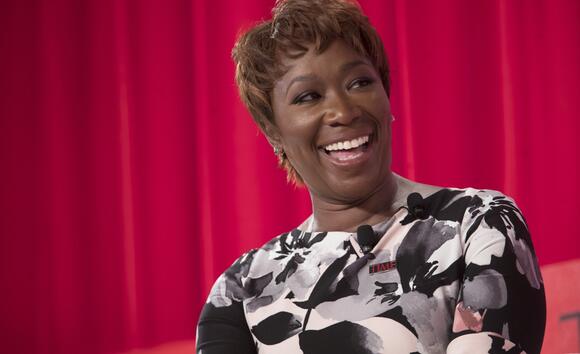 M SNBC's Joy Reid came under fire Wednesday after an on-air tirade in which she called Republicans a "creepy little COVID-loving death cult."

"OK, we get it! COVID is the precious, and you love it. You love COVID so much you want it to spread into schools, at the office, in the Walmart, on the cruise ships, and in the club," Reid said. "That great spongy ball with the red spikes, you want it pumping through your veins with an Ivermectin chaser. Why do you love it so dadgum much? We have absolutely no bloody idea."

Reid stated how troubled she was by the notion that some conservatives love COVID-19 while "everyone else hates COVID."

The former 2008 campaign staffer for President Barack Obama took the time to list the myriad places the virus is ravaging, including Southern Illinois, where Reid claims zero ICU beds are available.

The liberal host then recounted the story of a man and wife who both reportedly died of the disease and left behind five children.

"So yeah, the rest of us hate that this is happening," Reid said. Even the pope . The pope hates COVID too, and he loves everybody. He also says get vaccinated ."

"If misinformation could kill. It all helps to explain why Gov. Gavin Newsom beat the recall effort and by a lot," Reid said. "Republicans, your thirst for COVID is why you lost. Nobody likes your policies that threaten our safety and our kids."

Reid's monologue was met with categorical objections from conservatives on Twitter.

One journalist called Reid a "poisonous human being" who "doesn't care about the lives of conservatives and Republicans."

Nicole Saphier, a bestselling author and physician, posted that voices such as Reid only hurt efforts to beat the virus.

"Partisan generalizations like these only contribute to the politicization of the pandemic, ultimately doing significantly more harm than good," she wrote.

Joy is just another plantation slave who says what she is ordered to say by her masters at MSNBC. She doesn't have an original thought in that empty head of hers.

wow so what was she when she was tweeting negative opinions. on the vaccine when it came out under trump. Biden, harris and coumo also said negative stuff about the vaccine while trump wasn't president.the vaccine never changed, biden became president. now all that was against the vaccine. are pushing it down our throats. and yet we are supposed to take them seriously. after all they did make covid political.

She's just a dumbass black woman that got a job because of the color of her skin. For Christ sake she would never pass any intelligence test.

Douglas Wilder, the only black governor in Virginia's history, is no fan of the video endorsement Vice President Kamala Harris made for Terry McAuliffe, which is being played Sundays in hundreds of the Old Dominion's black churches.
VIRGINIA STATE・3 DAYS AGO
WashingtonExaminer

A Democratic Oklahoma state representative who identifies as "nonbinary" complained after Republican Gov. Kevin Stitt insisted there was "no such thing as non-binary sex."
OKLAHOMA STATE・19 HOURS AGO
WashingtonExaminer

'I've lost my joy': Anti-vax Republican, who worked for the Trump campaign and embraced QAnon, says she has COVID-19

Lauren Witzke, the 2020 GOP candidate for US Senate in Delaware, told followers she had "lost all of my senses."
DOVER, DE・3 DAYS AGO

TP For His Bunghole? Joe Biden Inexplicably Channeled The Great Cornholio At Town Hall, Everything Is Funny

Republican running for governor of Texas in hospital with Covid-19

Allen West, a tea party firebrand who is seeking the Republican nomination in the Texas gubernatorial race, is in the hospital after testing positive for the novel coronavirus. Mr West, a former Republican congressman from Florida, is unvaccinated. His diagnosis on Saturday came days after he attended a crowded political...
PUBLIC HEALTH・13 DAYS AGO
TheWrap

MSNBC’s ”The ReidOut“ host blasted ”Vichy Democrats“ for holding out on social spending bill. Joy Reid on Tuesday had harsh words for certain Democrats who, she said, are “willing to let this democracy die just so that they can cut the size of an infrastructure bill – I don’t know for who, or whose benefit.”
CONGRESS & COURTS・12 DAYS AGO
MSNBC

The Virginia governor race in three weeks is between Democrat Terry McAuliffe and Republican Glenn Youngkin who has been endorsed by Sebastian Gorka and Donald Trump. Polls show the race is close. Joy Reid and her panel discuss how GOP voter suppression and more could impact important races going forward.Oct. 14, 2021.
U.S. POLITICS・11 DAYS AGO

Joy Reid: The cancer of the Big Lie has spread through GOP ranks

Marjorie Taylor Greene polling her supporters on whether America should get a ‘national divorce’ has led critics to slam her for appearing to condone a civil war or the dissolution of the United States. Joy Reid and her panel discuss the potential threats to our democracy emerging from key figures on the right.Oct. 13, 2021.
CELEBRITIES・12 DAYS AGO
Newsweek

Joy Reid Slams Eric Clapton Donating to Anti-Vax Group: What He Has Said on Vaccines

The Rock and Roll Hall of Famer became more outspoken against the vaccine after experiencing what he called a "disastrous" reaction to an AstraZeneca injection.
CELEBRITIES・12 DAYS AGO
TheWrap

MSNBC’s Joy Reid torched musician Eric Clapton in her “The Absolute Worst” segment on Monday night, tearing into him for his anti-vaccine stance and for comparing lockdowns to slavery. “Celebrities have the power to sway millions of people, which is why it’s so alarming when, particularly, the ones with huge...
CELEBRITIES・13 DAYS AGO
Fox News

Former President Barack Obama traveled to New Jersey on Saturday to campaign for Gov. Phil Murphy and claimed that he understands why Americans are questioning when COVID-19 mandates will end. BIDEN LEANS MORE ON OBAMA WITH WHITE HOUSE UNDER PRESSURE FROM MULTIPLE CRISES. "The science says it's the right thing...
POTUS・1 DAY AGO

Conservative US political commentator Candace Owens suggested that America should “invade” Australia to free the people from “tyrannical” Covid-19 restrictions and compared the situation to the regimes of Joseph Stalin and Adolf Hitler. On Tuesday, The Daily Wire host made the odd comments on her show, noting that her husband...
PUBLIC HEALTH・2 DAYS AGO
milwaukeeindependent.com

In the New York Times, Miles Taylor and Christine Todd Whitman wrote, “We are Republicans. There’s only one way to save our party from pro-Trump extremists.” Taylor served in the Department of Homeland Security and was the author of the 2018 New York Times piece by “Anonymous” criticizing former president Trump. Whitman was governor of New Jersey from 1994 to 2001, after which she headed the Environmental Protection Agency under President George W. Bush.
IMMIGRATION・13 DAYS AGO
Fox News

GOV. ROY COOPER, (D) NORTH CAROLINA: Do you have plans to visit the southern border. JOE BIDEN, (D) PRESIDENT OF THE UNITED STATES: I have been there before, and I haven't -- I know it well. I guess I should go down, but the whole point of it is I haven't had a whole hell of a lot of time to get down.
4 HOURS AGO
Shine My Crown

Candace Owens refuses to show any compassion for Hollywood actor Alex Baldwin after he fatally shot and badly injured two crew members after firing a prop firearm on the set of the movie "Rust" in New Mexico.
CELEBRITIES・2 DAYS AGO

Unvaccinated People Are Banned From This, Starting Oct. 29

The worst of the pandemic seemed to be behind us when COVID vaccines were first introduced in the U.S. But over the past year, the battle against the disease has continued. A new, fast-spreading variant hit the country at the same time vaccination rates slowed, causing COVID cases, hospitalizations, and deaths to skyrocket back up over the summer. As a result, many U.S. officials have introduced COVID vaccine mandates to help keep citizens safe. In several major cities, including New York City, proof of vaccination is required just to enter most indoor spaces, and various companies have started to require vaccinations for employees, aided by orders from President Joe Biden. Soon, a new vaccine policy will affect hundreds of thousands of people, and it goes into effect in just a few days.
NEW YORK CITY, NY・4 DAYS AGO
Popculture

Tucker Carlson used an ableist slur on his Fox News show on Monday night, referring to CNN reporter Shimon Prokupecz as a "midget with a microphone." Carlson was in the middle of a segment about COVID-19 vaccine mandates, the protests against them, and other outlets' coverage of the debate. Prokupecz does not suffer from dwarfism, according to a report by The Daily Beast, but advocates for various groups have long called for the word "midget" to stop being used.
ENTERTAINMENT・26 DAYS AGO
nickiswift.com

Since her debut as a contender in the first season of "The Apprentice" in 2004, Omarosa Manigault Newman has been a divisive figure in the Trump-iverse. Omarosa, who is also largely known by her mononym, was intrinsically tied to her former television mentor for over a decade, first as a recurring "Apprentice" contestant, and later as a White House aide under his presidency. But business partnerships sometimes end abruptly, and so did Trump's and Omarosa's. It was unequivocally severed in December 2017, after Omarosa was fired for the alleged misuse of a government car and "integrity" issues, as The New York Times reported in 2018. (She denied these claims.)
PRESIDENTIAL ELECTION・20 DAYS AGO
Parsons Sun

Democratic candidate thought virtual meeting was private. This is what he said about Biden

As Virginia's gubernatorial race gets underway, CNN's Jeff Zeleny reports that Democratic candidate Terry McAuliffe may be distancing himself from the leader of his own party, President Joe Biden.
PRESIDENTIAL ELECTION・16 DAYS AGO