Two rescued from roof of Cargill grain elevator in Buffalo 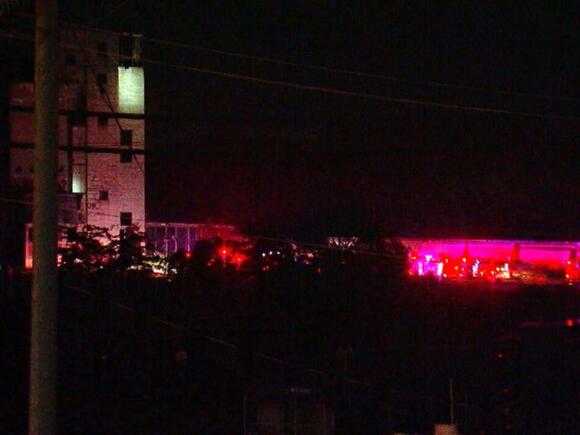 Buffalo police say two people were rescued from the roof of the Cargill grain elevator in Buffalo Wednesday.

The incident occurred around 11:30 p.m. Wednesday, officers responded to the Cargill grain elevator on the 800 block of Ohio Street after two people climbed to the roof and one of the individuals suffered a medical event and became trapped.

The Erie County Sheriff's Office helicopter was called to the scene and rescued both individuals.

The incident remains under investigation and no further information was released.

On Harlem Road in Cheektowaga, offices are flooded during storms and warehouses have feet of water inside, according to some business owners.
CHEEKTOWAGA, NY・7 HOURS AGO
WKBW 7 News Buffalo

The family of a woman who was found dead, after going missing for months is still searching for answers. Fifty-year-old Marquita Mull's body was found, in Chautauqua County, in an area she had no known connections to. Earlier this month, sheriff's office had identified Mull after she found off the "Rails to Trails" path in Portland, New York.
CHAUTAUQUA COUNTY, NY・2 HOURS AGO
WKBW 7 News Buffalo

New York State police said the crash occurred in the area of Route 104 and Kenyonville Road in the Town of Gaines.
ORLEANS COUNTY, NY・8 HOURS AGO

The Elmira Police Department announced over the weekend that Stephen M. Pesesky III, 31, had been arrested and charged with second-degree murder following a stabbing on Johnson Street in the city.
ELMIRA, NY・11 HOURS AGO
WKBW 7 News Buffalo

Suspect arrested in connection with barbershop murder in Niagara Falls

A man is in police custody, charged with the murder of a barber in Niagara Falls.
NIAGARA FALLS, NY・1 DAY AGO
WKBW 7 News Buffalo

A Buffalo man has pleaded guilty to throwing a burning basket into Buffalo City Hall in May 2020.
BUFFALO, NY・6 DAYS AGO
WKBW 7 News Buffalo

A man has died after he crashed into a car while riding his motorcycle in Niagara Falls Sunday.
NIAGARA FALLS, NY・7 DAYS AGO
WKBW 7 News Buffalo

Police said the crash occurred in the area of 1156 Hopkins Road near Billy Wilson Park and caused the bus to roll over.
AMHERST, NY・6 DAYS AGO

A Kenmore man has pleaded guilty to one count of manslaughter in the second degree for driving drunk and causing a deadly crash in South Buffalo.
BUFFALO, NY・7 DAYS AGO
WKBW 7 News Buffalo

Buffalo Police are looking for leads in connection to the city's most recent shooting.
BUFFALO, NY・9 DAYS AGO
WKBW 7 News Buffalo

The industry is experiencing an estimated shortage of 7,000 veterinarians, which is causing issues for pet-owners and veterinarian clinics across the country, and here at home.
BUFFALO, NY・7 DAYS AGO
WKBW 7 News Buffalo

Update: Batavia police say the 64-year-old man has been located and is safe.
BATAVIA, NY・10 DAYS AGO
WKBW 7 News Buffalo

Friday marked day eight of the Mercy Hospital strike in Buffalo with neither side indicating tonight that they’re any closer to a deal.
BUFFALO, NY・10 DAYS AGO