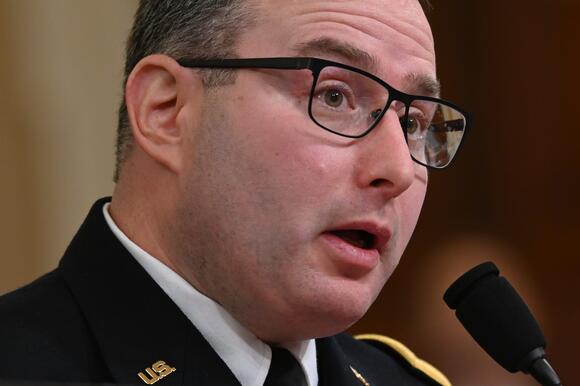 WASHINGTON — A new book claiming that Gen. Mark Milley, chairman of the Joint Chiefs of Staff, held calls with Chinese military leaders to head off a nuclear confrontation prompted swift backlash from many Trump allies — and one very consequential Trump critic.

"He usurped civilian authority, broke Chain of Command, and violated the sacrosanct principle of civilian control over the military. It’s an extremely dangerous precedent. You can’t simply walk away from that," Vindman wrote in a tweet .

Vindman testified against Trump in a House impeachment inquiry into the president's phone call with Ukrainian President Volodymyr Zelenskyy.

Milley, the top-ranking officer in the military, made two phone calls with his Chinese counterpart in 2020 to assure them that the U.S. would not launch a nuclear strike, according to a new book by Bob Woodward and Robert Costa of The Washington Post.

Republicans, including Trump himself, and conservative media allies have condemned Milley's actions as "treasonous" and called for Milley's sacking. Congressional Democrats, meanwhile, have expressed concern that any president is able to unilaterally launch a nuclear weapon without congressional input.

On Wednesday, President Joe Biden said he still has "great confidence" in Milley. White House press secretary Jen Psaki also offered the administration's endorsement of the top general, continuing that Milley "went through the normal channels of communication" and did not subvert the chain of command.

"The outgoing president of the United States, during this period of time, fomented unrest leading to an insurrection leading to an attack on the nation's Capitol," Psaki added, calling the situation "key context" for Milley's actions.

Vindman, a former National Security Council staffer in the Trump White House, told USA TODAY in August that h e believes his duties required him to report on the former president's actions , regardless of his personal politics or the impact on his career.

In July 2020, Vindman resigned from the Army , citing "bullying" from Trump and other senior aides that pushed him out of his national security role.

No matter how we react to it we have some people in our mist who is trying to destroy the citizens and our country we need to clean HOUSE now.

Democrats are trying to circumvent Sinema in the social spending plan. One tax alternative would pursue massive wealth gains by the rich in the stock market.
CONGRESS & COURTS・1 DAY AGO
CNBC

The House voted to hold former Trump advisor Steve Bannon in contempt of Congress for defying a subpoena issued to him by the lawmakers investigating the deadly Capitol riot. The resolution holding Bannon in contempt will now head to the Department of Justice for possible criminal prosecution, though it's unclear if he will ultimately be charged.
CONGRESS & COURTS・1 DAY AGO

A lawyer for Daniel Rodriguez wrote that "it offends due process to convict an individual who was acting upon authorization of a government official."
PUBLIC SAFETY・4 DAYS AGO
WashingtonExaminer

Donald Trump, who claims he never conceded the 2020 election, establishes himself as a former president in his lawsuit against the Capitol riot committee and National Archives.
PRESIDENTIAL ELECTION・4 DAYS AGO
WashingtonExaminer

Former President Donald Trump's new social media platform, TRUTH Social, has been given 30 days to comply with the software's terms of license before its access is terminated. If it fails to comply, the platform may face legal action or have to rebuild from scratch.
POTUS・6 HOURS AGO
CNBC

SkyBridge's Anthony Scaramucci told CNBC on Friday he hopes the SPAC linked to former President Donald Trump keeps soaring. "I want that thing to go up like another 10 times. The more it goes up, the less likelihood Donald Trump is running for president in 2024," said Scaramucci, a onetime Trump official.
PRESIDENTIAL ELECTION・12 HOURS AGO

Want the best of VICE News straight to your inbox? Sign up here. Shortly after the 2020 election, Texas Lt. Gov. Dan Patrick offered up to $1 million in reward money, to be paid out of his own campaign coffers, to “incentivize, encourage, and reward people to come forward and report voter fraud.” And now, the first person to claim that reward is Eric Frank, a progressive poll worker in Pennsylvania who reported a Republican for voting twice.
PRESIDENTIAL ELECTION・1 DAY AGO
Fox News

White House press secretary Jen Psaki said President Biden's approval ratings are so low because people are "tired of fighting" the coronavirus pandemic, which Biden promised to "shut down" during the 2020 campaign. A reporter asked Psaki during the White House's Friday press conference why the president's approval ratings have...
PRESIDENTIAL ELECTION・4 HOURS AGO
Fox News

After President Biden said at a CNN town hall last night he would defend Taiwan from an attack by China, the Chinese Foreign Ministry said there is "no room for compromise" on its territorial claims on the island. The latest trading of barbs between the U.S. and China over Taiwan...
FOREIGN POLICY・13 HOURS AGO

The House of Representatives voted on Thursday to hold Steve Bannon in criminal contempt for defying a subpoena issued by the Jan. 6 Select Committee. The vote fell largely along party lines, with every Democrat who voted approving the resolution, and all but a handful of Republicans voting against it. “Mr. Bannon stands alone in his defiance, and we will not stand for it,” Jan. 6 Select Committee Chairman Bennie Thompson (D-Miss.) said during the debate preceding the vote. “We will not allow anyone to derail our work, because our work is too important: helping ensure that the future of American democracy...
CONGRESS & COURTS・1 DAY AGO
WashingtonExaminer

A new report offers a look into the swear-word vocabulary employed by President Joe Biden when he gets frustrated.
POTUS・3 HOURS AGO
POLITICO

During her first 10 months as vice president, Kamala Harris has already broken 11 tie votes in the Senate.

The reality of a 50-50 chamber means the vice president can never be too far away. What happened: Called in on her birthday on Wednesday, Vice President Kamala Harris broke a Senate tie for the 11th time since taking office. The vote confirmed Catherine Lhamon for an Education Department post.
PRESIDENTIAL ELECTION・1 DAY AGO
The Independent

Author and Republican Senate candidate JD Vance has come under fire for a “callous” tweet seeking Donald Trump’s reaction to Alec Baldwin’s fatal on-set shooting in New Mexico.Baldwin was filming his forthcoming movie Rust on Thursday when he discharged a prop gun, killing director of photography Halyna Hutchins and wounding director Joel Souza.Vance referenced the incident in a tweet on Friday after Baldwin broke his silence to say his “heart is broken.”“Dear @jack let Trump back on. We need Alec Baldwin tweets,” Vance wrote, tagging Twitter CEO Jack Dorsey.The post drew outrage from critics accusing Vance of exploiting the...
U.S. POLITICS・8 HOURS AGO

A House vote on holding Steve Bannon in contempt of Congress featured an angry exchange between Rep. Marjority Taylor Greene and Rep. Liz Cheney, who serves as vice chair of the Jan. 6th committee. According to Democratic Rep. Jamie Raskin, another panel member who testified in favor of holding Bannon...
CONGRESS & COURTS・1 DAY AGO
HuffingtonPost

Fox News’ Dana Perino caught some blowback Thursday for suggesting that wind power isn’t green because the turbines are not recyclable. (Watch the video below.) “The Five” co-host was talking to guest Tucker Carlson about the “green energy agenda,” including wind power, when Perino made an observation that at least one person on Twitter called “nonsensical”:
ENERGY INDUSTRY・15 HOURS AGO
Newsweek