This Is the Best City for Country Music Fans 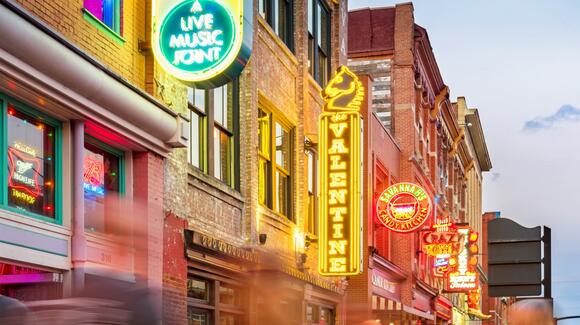 Country music has its roots somewhere in the South during the 1920s. Some called it cowboy music. However, it has a relationship with gospel and bluegrass music as well. In the 1950s, its audience grew outside its traditional boundaries as Johnny Cash became a national star and Elvis Presley emerged from Memphis. Today, Billboard treats it as a major part of the music industry and publishes a Hot Country Song list of the most popular albums every week. The annual CMT Awards are part of the TV music calendar.

Lawn Starter recently released its " 2021’s Best Cities for Country Music Fans " ranking. The study looked at 182 large American cities and ranks them based on "the number of country radio stations, concerts, and performance venues." The ranking methodology also turned to social media: "We also gauged the size of the local fandom based on Google search trends and availability of museums dedicated to the genre."

The top city should be no surprise to anyone. Nashville took that spot. Its score of 77.13 on a scale from 0 to 100 was well above any other city. It is home to the Country Music Hall of Fame and Museum, which was established in 1964. It is also the location of the Grand Ole Opry, America's most famous country music performance venue, which was founded in 1925. The city is well known for, among other things, one of the first important performances of Elvis Presley in 1956.

Next on the list is music performance mecca Las Vegas with a rating just shy of 46. Its casinos are some of the most famous venues in the world for major music artists.

The balance of the top part of the list is something of a mystery. Memphis is not there at all, only appearing in the 70th spot. St. Louis follows Las Vegas, and Salt Lake City is fourth. Fairly obscure Grand Rapids, Michigan, finished fifth and is the only northern city among the top 10.

Here are the overall scores of the 10 best cities for country music:

Click here to who are the 50 greatest country music stars of all time.

This Artist Has the Most No. 1 Hits

A 24/7 Tempo analysis reveals that the artist with the most top of the chart hits is the Beatles.
MUSIC・1 DAY AGO
Literary Hub

Just about everyone can agree on Dolly Parton. But when it comes to country music, people seem to disagree on just about everything else. From the start, it was marketed as unusually honest music, linked to the perceived simplicity of rural life in America. Country music is more old-fashioned than rock ’n’ roll, but less traditional—or, rather, more ambivalent about tradition. The basic template for a rock ’n’ roll band has remained remarkably stable ever since the seventies: drums, electric bass, and, above all, electric guitar. But in country music, traditional instruments like the banjo and the pedal steel guitar tend to fall in and out of favor, as country singers try to figure out precisely how “country” they really want to be.
MUSIC・12 DAYS AGO
WTVF

NASHVILLE, Tenn. (WTVF) — Nashville is known as Music City, and there's so much more than just Country music. On today's MorningLine, we learn about Latino music and how it has changed the music scene in Nashville over the past few years. We are joined by guitar artisan, Manuel Delgado, and singer/songwriter, Rachel Rodriguez, who not only tell us all about their music and culture, but also perform for us a little concert, so be sure to watch!
NASHVILLE, TN・6 DAYS AGO

Country music legend Tracy Byrd will headline the fifth-annual Wildcatters event, benefiting Big Brothers Big Sisters, on Saturday at the Rolling 7s Ranch Event Center. Opening act is Jeff Carson, a full-time police officer and part-time musician who just had a song land in the top 40. Wildcatters is a...
MUSIC・7 DAYS AGO
cincinnatimagazine.com

Experience the Music of Motor City

There aren’t many cities that have an entire genre of music named after them, but Detroit isn’t your average city. It’s a music lover’s paradise, where the era-defining “Motown sound” is just the tip of the iceberg. Home to Death, Alice Cooper, MC5, and The White Stripes, the Motor City...
14 DAYS AGO
97.3 The Dawg

Mickey Guyton, CMT's 2021 Breakout Artist of the Year, gave the most powerful and eloquent speech of the night during Wednesday night's (Oct. 13) CMT Artists of the Year event. Dedicating her win to everyone who helped get her to this point in her career, she pledged to continue to celebrate and platform overlooked and marginalized artists.
MUSIC・6 DAYS AGO
WYTV.com

WARREN, Ohio (WKBN)- MCA Nashville recording artist Josh Turner will be returning to Warren soon. Turner will be performing at W.D. Packard Music Hall on Thursday, April 21, 2022. Tickets will be on sale Friday, October 15 at 10 a.m. Turner is known for his chart-topping hits that include “Your...
WARREN, OH・9 DAYS AGO

CANEYVILLE, Ky. (WBKO) - Elvie Shane has performed at the Grand Ole Opry and toured with big names like Brooks and Dunn, Jason Aldean and Miranda Lambert. On Monday, the local country music star returned to his roots in Caneyville for a hometown celebration. Local police and the fire department...
CANEYVILLE, KY・9 DAYS AGO
Mental_Floss

Miss Live Music? These Are the 10 Best Cities Around the World to Catch a Concert

After a tumultuous start to the decade, live music is mounting a comeback. Venues around the world are once again hosting concerts of every size and style imaginable. To see which cities outperform the rest when it comes to musical entertainment, Money.co.uk analyzed numerous factors and compiled this list of the world's best cities for live music.
MUSIC・6 DAYS AGO
Wide Open Country

Between podcasts, best-selling nonfiction books and an endless stream of Netflix documentaries, it seems that people just can't get enough of the true crime genre. So it should come as no surprise that an interest in the macabre isn't exactly new. And in the case of the murder ballad, it's centuries old.
MUSIC・5 DAYS AGO
blac.media

Hannah Dasher is a fresh face in the country music scene. I’m going to be honest, I hadn’t heard of her until a week ago. But, I have to say I’m somewhat impressed. The Savannah native has been releasing music since 2018. Before that she acquired a music business degree and was working at Bass Pro Shops in Nashville until she eventually got a publishing deal in 2012 then a contract with Sony Music Nashville in 2017, according to an article by Christina Bosch of the CountrySwag music blog.
SAVANNAH, GA・2 DAYS AGO
Outsider.com

Even if you don’t win American Idol, there’s still hope for you. Alex Miller may not have been crowned as the next American Idol; however, he still celebrates some big wins. 17-year-old Alex Miller is a traditional honky-tonk country music artist. During Season 19 of American Idol, Miller wooed judges...
ENTERTAINMENT・5 DAYS AGO
SDSU Collegian

For over a decade, Mickey Guyton has been the only Black female artist signed to a major Nashville label. She made her proper debut in 2015 with her single “Better Than You Left Me,” which was a moderate Top 40 hit on country radio, but it wasn’t until last year when her song “Black Like Me” was released that she would find any sort of major success.
MUSIC・2 DAYS AGO
iHeartRadio

The country act just dropped their new album, 'The Comeback,' on Friday.
MUSIC・1 DAY AGO

CHOCTAW, Miss. (WTOK) - The Mississippi Band of Choctaw Indians has had a close relationship with country music for a long time. In fact, since 1967, the Choctaw Indian Fair has been a major destination for hundreds of country music stars, including the likes hall of famers Connie Smith, Charlie Daniels, the Oak Ridge Boys and Philadelphia native Marty Stuart.
CHOCTAW COUNTY, MS・8 HOURS AGO
iHeartRadio

Spencer is getting ready to hit the road on "my first HEADLINING tour...who’s coming?!"
MUSIC・7 HOURS AGO
Longview News-Journal

Grammy-winning country music singer Larry Gatlin will perform in concert Sunday at Memorial City Hall in Marshall. The concert begins at 7:30 p.m. and is a special event in Memorial City Hall’s 2021-2022 season lineup. Gatlin rose to fame with his brothers Steve and Rudy as the Gatlin Brothers, a...
MARSHALL, TX・38 MINUTES AGO
Times Leader