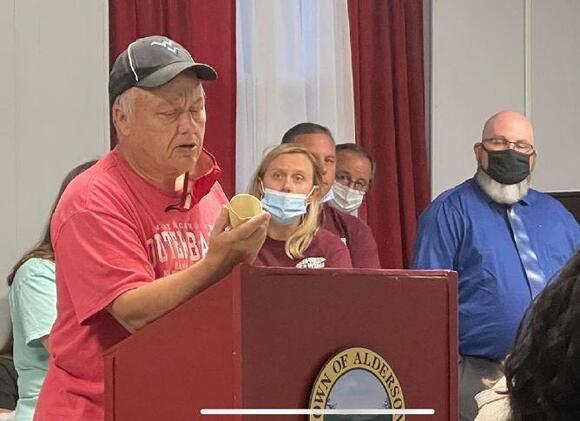 Homerule status is one step closer for Alderson after a vote by the Alderson Town Council on Sept. 9. The application for the town’s Homerule status moved forward with a public hearing run by Acting-Mayor Betty Thomas. The town’s application for Homerule status moved forward with a public hearing during the meeting. The program would enable the passage of a sales tax rather than the business and occupation tax previously enacted by council in response to a budget shortfall. The difference between the two comes down to a result from local business owners in a previous Town Council meeting — sales tax is paid by customers directly on sales, where a B&O tax is calculated on gross expenditures rather than profits alone. Specifically, the application requests four authorities for the town: – “on the spot” code enforcement citations – the removal of party membership requirements from local parties for election boards – disposition of equipment or property without public auction – a 1% sales tax and corresponding B&O tax reduction Copenhaver highlighted that if the town is “approved under Homerule status, there will be no tax on wholesale or retail through the B&O tax. It will be a one percent consumer sales tax. … If the Homerule board does not grant our status, it will remain in effect.” Until the Homerule status is approved, the town cannot implement a sales tax — this is the primary reason the B&O tax remains in place. If the application is approved, the sales tax could be implemented as soon as July 1, 2022. The first reading of the ordinance was passed during the August Town Council meeting. On Sept. 9, the town approved the second reading after a public hearing on the topic. One person, Herbert Burdette, spoke out in favor of the application during the public hearing. “I’ve been keeping up with this Homerule thing for four months now and I would like to bring it to y’all’s attention [that you should] pass it through. It’s got it’s good points and bad points, but the good points outweigh the bad points. We need this, the town needs this. I would like for you all, … please, pass it and let it go forth. It’s a do or die situation.” The second reading was unanimously passed by Town Council. In other business: — Mayor Travis Copenhaver was said to be out of town for the meeting, during which council accepted his resignation as judge as a result of his recent arrest on three felonies. For more information on that portion of the meeting, see The West Virginia Daily News’ coverage, headlined “Alderson Accepts Copenhaver's Judgeship Resignation, Sets Hearing On Mayorship.” — A grant application was approved looking to replace the town’s backhoe. Alderson grant writer Margeret Hambrick explained “these are the same conditions that we approved … each time the council has gotten a USDA grant. You’d read them before. We need to replace the backhoe, and this is a good way to do it.” The motion was unanimously approved. — Board of Education member and Alderson history enthusiast Rick Parker approached the council with a donation. He explained “I have two items I’d like to give to the town so they can put it in their museum. The first is a pamphlet welcoming you to Alderson. It talks about the modern conveniences of Alderson and it still shows the Alderson City Hall as a fire department, so you know how old that is. The second thing I’m very proud of is … an egg cup that has the Alderson house emblem on it. I’ve never seen that and I’ve been around for a while. … Even though it’s cracked, the Alderson house is very important to Alderson, so if you make sure that it stays in a museum or somewhere, my brothers and I would like you to have that.” Thomas accepted both items on behalf of the town to applause. - Updates to the town’s impound lot policy were also approved. Thomas explained the changes include “implementing the biohazard exposure rates, … implementing a $15 administrative fee, … setting up the guidelines to what officers shall do after and during the towing of a vehicle, … updating record companies and rotation lists of companies that have up to date town business licenses and are up to date on B&O tax.”

Washington (CNN) — Nine House Republicans broke ranks Thursday to join all Democrats in voting to hold Steve Bannon in contempt of Congress for defying a subpoena from the select committee investigating the January 6 attack on the US Capitol. While Democrats didn't need any GOP votes in order to...
CONGRESS & COURTS・50 MINUTES AGO
CNN

Oct 21 (Reuters) - A panel of advisers to the U.S. Centers for Disease Control and Prevention (CDC) on Thursday are considering several recommendations for rollout of COVID-19 vaccine boosters from Moderna Inc (MRNA.O) and Johnson & Johnson (JNJ.N), expected to pave the way for additional shots for millions of Americans.
PUBLIC HEALTH・3 HOURS AGO
The Associated Press

Trump plan for new media venture gets investors’ thumbs up

NEW YORK (AP) — Some investors aren’t waiting to see if former President Donald Trump’s plans for a media company to challenge the likes of Facebook, Twitter and even Disney can actually become reality — they’re all in. Trump said Wednesday that he’s launching Trump Media & Technology Group as...
NEW YORK CITY, NY・16 HOURS AGO

LOS ANGELES (AP) — Netflix employees who walked out Wednesday in protest of Dave Chappelle’s special and its anti-transgender comments were joined by allies who chanted “Trans lives matter,” getting pushback from counterprotesters who also showed up. A pre-noon rally at a Netflix office-studio complex drew about 100 people, most...
LOS ANGELES, CA・21 HOURS AGO
NBC News

WASHINGTON — Senate Republicans filibustered a major voting bill Wednesday that would allow automatic and same-day voter registration and make Election Day a holiday. The 49-51 vote on the procedural motion was short of the 60 needed to advance the legislation to the next stage, marking the second time this year that Republicans have prevented a Democratic-backed voting bill from moving forward.
PRESIDENTIAL ELECTION・1 DAY AGO
The Associated Press

WASHINGTON (AP) — The Federal Reserve is imposing a broad new set of restrictions on the investments its officials can own, a response to questionable recent trades that forced two top Fed officials to resign. The Fed announced Thursday that its policymakers and senior staff would be barred from investing...
U.S. POLITICS・2 HOURS AGO
ABC News

A salmonella outbreak in 37 states has been linked to fresh whole red, white, and yellow onions sold to restaurants and grocery stores throughout the U.S., according to the U.S. Centers for Disease Control and Prevention. At least 652 people have reported illness with 129 hospitalizations due to the onions...
FOOD SAFETY・3 HOURS AGO

NFL, players agree to end ‘race-norming’ in $1B settlement

PHILADELPHIA (AP) — The NFL and lawyers for thousands of retired NFL players have reached an agreement to end race-based adjustments in dementia testing in the $1 billion settlement of concussion claims, according to a proposed deal filed Wednesday in federal court. The revised testing plan follows public outrage over...
NFL・18 HOURS AGO
ABC News

British police have charged a 25-year-old man with the murder of a Conservative lawmaker, alleging that the killing was an act of terrorism by a supporter of the Islamic State group
PUBLIC SAFETY・4 HOURS AGO