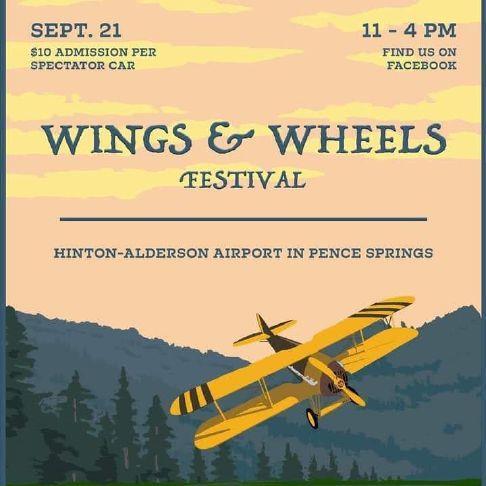 The annual Wings and Wheels Festival is once again being held in Pence Springs after being unable to take place in 2020. It is set to be held on Sept. 18 from 11 a.m. until 4 p.m. The event is partly dedicated to Ruth Tolley Gwinn who holds the title of the youngest woman to earn a pilot's license in West Virginia history.

Gwinn was the daughter of James Tolley who was an aviation pioneer in West Virginia. After building an airfield on the family farm, Tolley began landing planes at what is now the Hinton-Alderson Airport (WV77) in the early 1930s. In the description of a DVD called "The Long Runway Home," which tells the story of Gwinn and her husband Col. John Gwinn, she is quoted as saying, "I didn't learn to drive, I learned to fly!" At only 16 years old, Gwinn accomplished what is known as "soloing," which means she flew without the aid or assistance of an instructor.

A few years after Ruth soloed and gained her pilot's license, she became one of the instructors in a program to train military pilots. This training was held in Princeton.

John Gwinn was a colonel in the United States Air Force. After completing his career, he undertook the project of building a commercial airport in Lewisburg. Once completed, the colonel proceeded to manage the Greenbrier Valley Airport until 1994 when he retired.

In 2009, Ruth and John were awarded the Shepherd's Center of Greenbrier Valley Community Service Award.

Several announcements have already been made regarding the Wings and Wheels Festival. This includes the entertainment that will be present. Festival-goers can look forward to hearing the musical stylings of Tommy Griffith as well as the Greenbrier Academy's African Drummers.

Food will be available at the event. According to an announcement made on the festival's Facebook page, they will be serving BBQ from Stuart's, which is a local restaurant. Limited glamping sites are available at the airport for anyone wishing to stay overnight.

For more information on the Wings and Wheels Festival, visit the "Wings & Wheels Festival" Facebook page. To learn more about Ruth Tolley Gwinn, "The Long Runway Home" DVD is available to purchase on www.patchworkfilms.com/longrunwayhome for $20.

Washington (CNN) — Nine House Republicans broke ranks Thursday to join all Democrats in voting to hold Steve Bannon in contempt of Congress for defying a subpoena from the select committee investigating the January 6 attack on the US Capitol. While Democrats didn't need any GOP votes in order to...
CONGRESS & COURTS・55 MINUTES AGO
CNN

Oct 21 (Reuters) - A panel of advisers to the U.S. Centers for Disease Control and Prevention (CDC) on Thursday are considering several recommendations for rollout of COVID-19 vaccine boosters from Moderna Inc (MRNA.O) and Johnson & Johnson (JNJ.N), expected to pave the way for additional shots for millions of Americans.
PUBLIC HEALTH・3 HOURS AGO
The Associated Press

Trump plan for new media venture gets investors’ thumbs up

NEW YORK (AP) — Some investors aren’t waiting to see if former President Donald Trump’s plans for a media company to challenge the likes of Facebook, Twitter and even Disney can actually become reality — they’re all in. Trump said Wednesday that he’s launching Trump Media & Technology Group as...
NEW YORK CITY, NY・16 HOURS AGO

LOS ANGELES (AP) — Netflix employees who walked out Wednesday in protest of Dave Chappelle’s special and its anti-transgender comments were joined by allies who chanted “Trans lives matter,” getting pushback from counterprotesters who also showed up. A pre-noon rally at a Netflix office-studio complex drew about 100 people, most...
LOS ANGELES, CA・21 HOURS AGO
NBC News

WASHINGTON — Senate Republicans filibustered a major voting bill Wednesday that would allow automatic and same-day voter registration and make Election Day a holiday. The 49-51 vote on the procedural motion was short of the 60 needed to advance the legislation to the next stage, marking the second time this year that Republicans have prevented a Democratic-backed voting bill from moving forward.
PRESIDENTIAL ELECTION・1 DAY AGO
The Associated Press

WASHINGTON (AP) — The Federal Reserve is imposing a broad new set of restrictions on the investments its officials can own, a response to questionable recent trades that forced two top Fed officials to resign. The Fed announced Thursday that its policymakers and senior staff would be barred from investing...
U.S. POLITICS・2 HOURS AGO
ABC News

A salmonella outbreak in 37 states has been linked to fresh whole red, white, and yellow onions sold to restaurants and grocery stores throughout the U.S., according to the U.S. Centers for Disease Control and Prevention. At least 652 people have reported illness with 129 hospitalizations due to the onions...
FOOD SAFETY・3 HOURS AGO

NFL, players agree to end ‘race-norming’ in $1B settlement

PHILADELPHIA (AP) — The NFL and lawyers for thousands of retired NFL players have reached an agreement to end race-based adjustments in dementia testing in the $1 billion settlement of concussion claims, according to a proposed deal filed Wednesday in federal court. The revised testing plan follows public outrage over...
NFL・19 HOURS AGO
ABC News

British police have charged a 25-year-old man with the murder of a Conservative lawmaker, alleging that the killing was an act of terrorism by a supporter of the Islamic State group
PUBLIC SAFETY・4 HOURS AGO