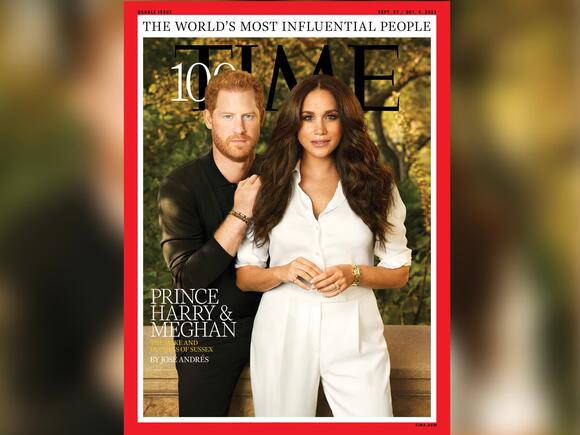 Wednesday saw the release of the cover of Time magazine’s top 100 most influential people in the world issue and this year’s features Prince Harry and Meghan Markle on the cover.

However, the stance of the two royals on the cover has sparked a debate about body language. Meghan is stood further forward than Harry, who is perched on a ledge just behind her, giving them equal height, with his hand on her shoulder.

While the photo would appear completely unoffensive and harmless to most people, some have taken issue with the body language of the couple and branded the image “awkward” and “heavily airbrushed.”

On Twitter, US conservatives like Candace Owens said that the image was “pathetic” and that she wouldn’t “want my husband to be embarrassed like this in front of the world.”

Others have echoed similar sentiments and accused Harry of “hiding” behind Meghan.

Others don’t have quite the same issue and think the couple look absolutely stunning.

Body language expert Judi James told The Sun: “Looking more like a scene from Suits than your average royal-marries-actress couple, Harry and Meghan have adopted the ultimate City power-poses here, with most of the power signals coming from Meghan while Harry seems happy to endorse her as a wingman.”

Darren Stanton, another body language expert, told the Daily Mail that the image reminded him of Kim Kardashian and Kanye West. “We see this image of Prince Harry standing behind Megan‘s right hand on her shoulder this is to say ‘I’m with you I am supporting you’. This is very reminiscent of some of the shots that we have seen from Hollywood power couples in the past and most similarly with Kanye West and Kim Kardashian.”

The feature on Harry and Meghan was written by Spanish chef and founder of World Central Kitchen Jose Andres who praised the couple’s “compassion” and for giving a “voice to the voiceless.”

Harry and Meghan are not influencing anyone. They are self centered and out of touch. Why would anyone put them on a cover.

Body language does speak loud and clear….intentional or unintentional…. Megan wears the pants….every year he looks more saddened and lost than the previous…

She looks like she is trying to be Michelle Obama. Something is seriously wrong with her because she is always trying to be someone she is not. Meghan needs serious long term psychiatric treatment imo.

Before becoming the Duchess of Sussex, Meghan Markle initially rose to prominence through her time in Tinseltown. Starring as Rachel Zane in USA Network's "Suits," the former actor appeared in the show's first seven seasons before uprooting her life for royalty. She has also made appearances in prominent programs such as "90210," "CSI: NY," and "CSI: Miami," along with film appearances in "Get Him to the Greek" and "Horrible Bosses."
CELEBRITIES・16 DAYS AGO
US Magazine

Grandson duties activated! Prince Harry went into “panic mode” after learning that Queen Elizabeth II had been rushed to the hospital earlier this month, a source exclusively reveals in the new issue of Us Weekly. “He felt helpless being 5,000 miles away in Montecito, [California,] and has been checking-in non-stop...
CELEBRITIES・1 DAY AGO
enstarz.com

Are Prince Harry and Meghan Markle moving to New York?. The Duke and Duchess of Sussex are reportedly considering a move to The Big City so they can make their brand even bigger. As of the moment, after stepping down as senior members of the royal family, they are now...
CALIFORNIA STATE・24 DAYS AGO
Popculture

Meghan Markle's father, Thomas Markle, appears to be serious regarding his intentions to sue his daughter and her husband, Prince Harry, in order to see his grandchildren. According to CafeMom, Thomas recently appeared on Good Morning Britain, during which he said that he was in contact with lawyers to see about possibly suing his daughter and son-in-law in order to have visitation rights to his grandchildren, Archie and Lilibet. Thomas said this past summer that he would be petitioning the courts in California in order to see his grandkids.
CELEBRITIES・5 DAYS AGO

Meghan Markle looked stunning in off-duty chic as she made her first public appearance since leaving New York with Prince Harry last month. The Duchess of Sussex teamed up with Brightly as part of their online Storytime, where she proudly read her debut children's book, The Bench. The best-selling novel tells the story of the special relationship between father and son, as seen through a mother's eyes.
BEAUTY & FASHION・1 DAY AGO
ourcommunitynow.com

ROYAL fans are upset than Meghan Markle and Prince Harry’s daughter Lilibet may miss out on a key royal tradition. Babies born into the royal family traditionally all get baptised in.
CELEBRITIES・13 DAYS AGO
townandcountrymag.com

It's been a relatively quiet week for royals news, but that hasn't stopped some of the British tabloids from turning when and where Meghan Markle and Prince Harry's daughter Lilibet “Lili” Diana’s christening will take place into a salacious story. The Duke and Duchess of Sussex’s rep gave a rare comment on the couple's actual plans, making it clear they were not set in stone yet despite multiple stories claiming from “sources” that Lili wouldn't be baptized in England.
CELEBRITIES・14 DAYS AGO
HuffingtonPost

Meghan Markle has for years been the target of sweeping hate-fueled harassment online — and a recent investigation has found that a small handful of people were behind it, utilizing social media to propel violent racist and sexist posts to reach millions of people. Bot Sentinel, a platform created by...
CELEBRITIES・2 DAYS AGO

Is Meghan Markle jealous of her half-siblings' relationship with their dad, Thomas Markle Sr.?. Thomas Markle Sr. has some shocking allegations towards his youngest daughter, Meghan Markle. During his recent interview on Good Morning Britain, the 77-year-old former lighting director claimed that there were already tensions between her and Meghan...
CELEBRITIES・4 HOURS AGO
International Business Times

It's been over a year since Meghan Markle and Prince Harry stepped back as working royals, but one royal biographer has claimed they continue to use their association with the royal family to make money. Earlier this month, the Duke and Duchess of Sussex joined Ethic, a sustainable investment firm...
CELEBRITIES・3 DAYS AGO
Elle

Before she was a duchess or full-time former royal, Meghan Markle was already a very busy human, juggling her acting career (which included a lead role on USA's legal drama Suits) and running her (now defunct—RIP) lifestyle blog, The Tig. In 2015, Meghan was still a year away from meeting...
CELEBRITIES・10 DAYS AGO
Us Weekly

Still in the works! Prince Harry and Meghan Markle’s rep responded to rumors about their 4-month-old daughter Lilibet’s christening. Plans for the baptism “have not been finalized,” the spokesperson told E! News on Wednesday, October 13, calling rumors of an upcoming Church of England christening “mere speculation.”. The couple, who...
CELEBRITIES・15 DAYS AGO

Prince Harry and Meghan Markle have isolated themselves from family because they're 'so desperate to control the narrative that they can't risk anyone else influencing it', royal biographer Tom Bower claims

Meghan Markle and Prince Harry will live to regret their 'poisonous choice' of cutting people out of their lives, a royal author has claimed. Commentator Tom Bower, who is currently working on a biography of Meghan, 40, told Closer magazine the 'stubborn' mother-of-two will regret cutting ties with her father Thomas Markle, 77, and moving her husband and two children away from the royal family to Montecito, California.
WORLD・1 DAY AGO
Hello Magazine

The Duke and Duchess of Sussex are said to have attended Halloween parties in the past and the couple even once hinted about having an adorable costume for their eldest child, Archie. Back in 2019, when Prince Harry and Meghan were still using their Sussex Royal Instagram account, they shared...
CELEBRITIES・2 DAYS AGO
DesignerzCentral

Prince Harry and Meghan Markle are treated like celebrities after leaving their royal duties, but the admiration they received does not compare to what the royal family receives.
NEW YORK CITY, NY・1 DAY AGO
Us Weekly

Sharing her truth. Meghan Markle opened up about her experiences as a parent in an open letter about paid family leave — and she admitted it’s not always a piece of cake. “In June, my husband and I welcomed our second child,” the Duchess of Sussex, 40, wrote in the letter to U.S. Congress, published on Wednesday, October 20. “Like any parents, we were overjoyed. Like many parents, we were overwhelmed.”
CELEBRITIES・7 DAYS AGO
Insider

A recent study found that 83 Twitter accounts were responsible for approximately 70% of the hate content aimed at Meghan Markle and Prince Harry.
CELEBRITIES・1 DAY AGO
hngn.com

Prince Harry and Meghan Markle have been trying to become "financially independent" since stepping down as senior royals. One way they've done this by engaging the corporate world, where they've taken on new roles and signed multi-million dollar business deals. The pair just announced their foray into the financial world...
CELEBRITIES・14 DAYS AGO
ohmymag.co.uk

Meghan Markle and Prince Harry have been keeping themselves busy since their move to the US, with lucrative Netflix and Spotify deals, the birth of their daughter Lilibet, jaw-dropping tell-all interviews, and the launching of the Archewell Foundation. And now, the pair have even made their foray into the banking world - ethically, of course.
CELEBRITIES・14 DAYS AGO
enstarz.com

Since stepping down from their senior royal rules, Prince Harry and Meghan Markle are expected to be extremely rich thanks to their brand new "Sussex" brand. Their brand is now worth estimated to be worth $344 million. The Duke and Duchess of Sussex have signed a multimillion-dollar partnership with Netflix,...
CELEBRITIES・12 DAYS AGO