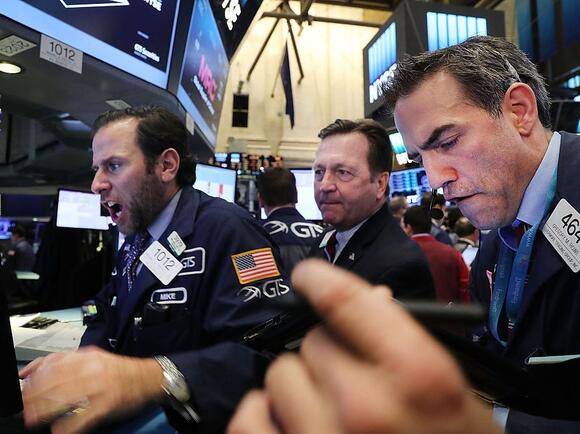 US stocks rose on Thursday as investors concentrated on strong regional manufacturing activity that underpinned confidence in the broader economic outlook, while debt problems at China's second-biggest property developer weighed on Asian equities.

The NY Empire State Manufacturing Index, a gauge for business conditions for New York manufacturers, massively beat expectations in September, jumping to 34.3 from 18.3 in August. Analysts expected a reading of 18.

"That was enough to flush out the pent-up dip buyer demand out there with markets proclaiming the US recovery was back on track," Jeffrey Halley, a senior market analyst at OANDA, said.

Investors chose to focus on this piece of data, rather than soft US industrial production figures overnight, which missed expetations.

The S&P 500 rose by its most in nearly 3 weeks on Wednesday, rising 0.8%, as cyclical industries and tech stocks took the index back to within 1.3% of its all-time highs, Deutsche Bank strategists said. The Nasdaq closed 0.8%, finishing higher for the first time in six sessions.

US weekly jobs data and monthly retail sales are due later Thursday.

Asian equities fell as sentiment was still centered around the unfolding collapse of Evergrande after the housing authority notified China's major banks that the property developer won't be able to pay interest payments on loans due September 20.

The Hang Seng Composite Index that tracks properties and construction stocks fell as much as 4.3% at one point. That included big declines for developers like Guangzhou R&F, which plunged 12.2%, and Sunac China, which fell 11.5%.

"Coming after the carnage in gaming stocks this week after the latest government investigation targeted Macau's casinos, China markets don't have a lot to cheer about today," Halley said.

The government in Macau, the only location in China where gambling is legalized, said this week it would begin consultation on a potential overhaul of the industry .

Meanwhile, European stocks traded higher on Wednesday, driven by a 20% jump in Lagardere after French media giant Vivendi said it would buy a stake in the publishing firm.

Oil prices made solid gains after data showed nationwide crude inventories fell more than expected in the latest week, allaying some concern about the demand outlook. Brent crude was last trading 0.2% higher at $75.64 a barrel and West Texas Intermediate rose 0.2% to $72.75 a barrel.

The Dow Jones Industrial Average closes at a record high Friday, its first such milestone since August, with U.S. stock benchmarks booking weekly gains on optimism surrounding third-quarter earnings, even as shares of technology companies fell under pressure.
STOCKS・12 HOURS AGO
moneyweek.com

Can anything stop rising inflation? asks Daniel Moss on Bloomberg. How about a Chinese slowdown? The world’s second-biggest economy grew at a record 18.3% year-on-year in the first quarter of the year but has slowed sharply. GDP rose by an annual 4.9% in the third quarter, the slowest pace in a year and down from the 7.9% rate recorded between April and June, says Katie Silver for the BBC. Soaring commodity prices have seen many provinces impose electricity rationing, which is weighing on industries such as cement, steel and aluminium smelting.
BUSINESS・1 DAY AGO
Markets Insider

LONDON (Reuters) – Equity funds enjoyed their biggest inflows in five weeks as investors ramped up bets that concerns about sticky inflation may be overdone and that central banks will therefore remain in dovish mode, a weekly round-up by BofA showed on Friday. In the week to Wednesday, investors ploughed...
STOCKS・23 HOURS AGO
The Independent

Troubled Chinese property developer Evergrande seemed to stave off immediate collapse on Friday, helping to lift global markets – including stocks in London.The FTSE 100 closed up 14.25, crowning a good week for the index.It ended at 7,204.55, a 0.2% rise on the day before.“The imminent prospect of an Evergrande default appears to have been deferred for another day, after this morning’s report out of Asia that it had paid the 83.5 million US dollars (£60.7 million) interest payment, which was due for payment by tomorrow,” said CMC Markets analyst Michael Hewson.“As a consequence, we look set to finish...
STOCKS・16 HOURS AGO

Jones, the founder and chief investment officer of Tudor Investment Corporation, told CNBC he has crypto in single digits in his portfolio.
ECONOMY・2 DAYS AGO
Markets Insider

There’s currently one way to buy cryptocurrency exchange-traded funds in the U.S. — through the Bitcoin Strategy ETF that deals in Bitcoin futures traded on the Chicago Mercantile Exchange. More such possibilities are on the horizon stateside, but these products … Continue reading → The post How to Invest in Crypto ETFs appeared first on SmartAsset Blog.
STOCKS・16 HOURS AGO
Markets Insider

Snapchat parent Snap fell as much as 23% on Friday, after changes to Apple's tracking settings and the pandemic impacted earnings.
STOCKS・18 HOURS AGO
Markets Insider

What is an index fund? A low-cost, low-risk way to invest in the stock market

An ethereum-based ETF may come as soon as this year, but other altcoin funds will have to wait, an expert says

For other altcoin-futures ETFs, the question is if the underlying coins will list on the CME, said Trey Griggs, US CEO of crypto trading firm GSR.
MARKETS・20 HOURS AGO
The Motley Fool

The stock market continues to chug along, opening up opportunities to cash in. This duo of stocks provides more unique growth opportunities than most. There are few better roads to building wealth over your lifetime than investing in the stock market. The long-term average return for the S&P 500 has been about 11% per year, and that's through depressions and recessions, war and civil unrest.
STOCKS・2 DAYS AGO
Markets Insider

Soaring oil prices usually boost the S&P 500. Why that might not be the case this time around, according to Bank of America

Budget tightening by US oil companies stands to serve as a headwind for the S&P 500, the investment bank said.
ENERGY INDUSTRY・16 HOURS AGO
24/7 Wall St.

Donald Trump's SPAC deal continues to dominate investors' dreams, but there are other meme stocks to keep an eye on as well.
STOCKS・19 HOURS AGO
Markets Insider

Tesla took a $51 million hit on its bitcoin investment in Q3 despite the token soaring 30%. Here's why.

According to Tesla's accountants, the company's bitcoin fell in value during the third quarter, despite the price jumping.
STOCKS・1 DAY AGO
The Guardian

A Quick Look at ARK Invest’s Q3 for ARKK

24/7 Wall St. takes a look at ARK Invest's most famous fund, the ARK Innovation ETF, and what went down in its third quarter.
STOCKS・1 DAY AGO