By Eyewitness News
ABCNY
30 days ago 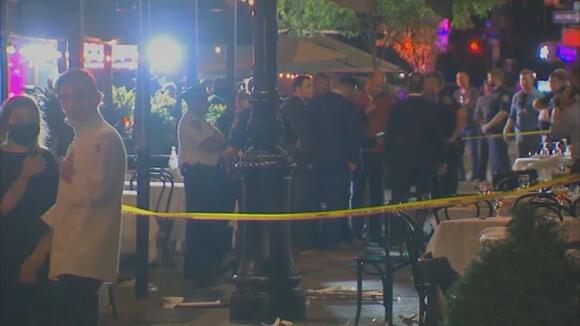 A 28-year-old man was shot in the leg after two gun-toting men held up diners eating outside an upscale restaurant on Manhattan's Upper East Side. It happened just after 10 p.m. Wednesday outside Philippe Chow on East 60th Street. The mask-wearing suspects emerged from a dark-colored SUV and descended on two men who were dining at different tables. Video first obtained by Eyewitness News shows the incident unfold:

Exclusive surveillance video shows a shooting and robbery outside an Upper East Side restaurant.

One suspect stole a 31-year-old man's Rolex Stainless Steel Submariner. The other suspect approached a 28-year-old man on a date at a separate table to rob him. That victim resisted and struggled with the suspect, grabbing his gun, which suddenly went off. The victim, later identified as Melchior Cooke, was shot in the leg, and the startled suspect dropped the weapon and fled. Cooke, a plumber with a 4-year-old son, staggered onto the sidewalk and placed the gun in the restaurant. First-arriving police officers placed a tourniquet around Cooke's leg before he was taken to New York-Presbyterian Hospital-Cornell with a non-life-threatening injury. His mother, Lisa Cooke, said she was breathing a sigh of relief on Thursday that her son is OK. "I have nine kids...I would expect that from him, he's not going to let anyone do that...pull a gun out and rob him -- he's not going to let that happen..my kids aren't that type of kids," Cooke said. "We believe the patrons have no connection to another, the two perps come out, they go right to the tables that each individual was sitting at, we believe this is a robbery for high-end jewelry," said NYPD Chief of Detectives James Essig. So far, no arrests have been made. ALSO READ | Missing Long Island native's boyfriend a person of interest & hindering investigation, police say

Gabby Petito's Instagram account is back after it was mysteriously deleted, while police in Utah are confirming an "incident" between her and boyfriend Brian Laundrie.

Welcome to New York! If you're unvaccinated can't dine in! Boycott all dining don't go to Broadway! Make these democraps pay!!

Outdoor dining isn’t all that it’s cracked up to be. 🤨

It's just the beginning nobody ain't seen nothing yet.

Police said officers found a 51-year-old man with a slash wound to his face and a stab wound to the abdomen around 1:05 a.m. on Hester Street on the Lowest East Side near Sara D. Roosevelt Park.
MANHATTAN, NY・10 HOURS AGO
ABCNY

An elderly woman was attacked and robbed of her purse while sitting inside a movie theater in Manhattan nearly two weeks ago.
MANHATTAN, NY・7 HOURS AGO
ABCNY

A man was robbed at gunpoint in Brooklyn for a large amount of jewelry in the trunk of his car.
BROOKLYN, NY・1 DAY AGO
ABCNY

A teenager was shot and killed after gunfire rang out near a busy intersection in Manhattan Friday night.
MANHATTAN, NY・19 HOURS AGO

The woman can be seen dressed all in black and carrying a red gasoline can at the Yeshiva of Flatbush.
BROOKLYN, NY・1 DAY AGO
ABCNY

The 16-year-old girl who survived being shot in the head in a Brooklyn park was miraculously released from the hospital Friday morning, just two weeks after her brush with death.
BROOKLYN, NY・1 DAY AGO

Police say the man walked into Playa Bowls on Purdy Avenue on Friday, October 8th. He told the employees he was there to perform an inspection of the premises.
RYE, NY・1 DAY AGO
ABCNY

A man who spent two decades behind bars for an armed robbery in Queens that he didn't commit, is out of prison and speaking exclusively to Eyewitness News.
QUEENS, NY・16 HOURS AGO
ABCNY

Police say the group walked up to a 21-year-old man, kicked him, punched him, and slashed him in the face.
BRONX, NY・2 DAYS AGO

At the NYPD Community Center in East New York, kids and police are dancing together and playing basketball to enjoy a safe refuge from the streets.
BROOKLYN, NY・2 DAYS AGO
ABCNY

A large reward is being offered for information leading to an arrest after a cat was found shot on Long Island on Monday.
SUFFOLK COUNTY, NY・14 HOURS AGO
ABCNY

Victor Mercado, 64, had been awaiting trial on weapons charges since last July. Mercado tested positive for COVID last week while at the infirmary at Rikers and died on Friday.
PUBLIC HEALTH・1 HOUR AGO