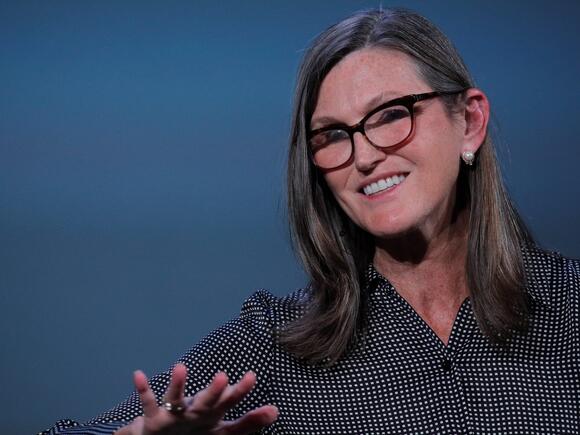 Cathie Wood has now sold around $266 million of Tesla shares in September as the stock hovers near multi-month highs.

Wood's Ark Invest group sold 81,609 shares of the electric-car maker, worth around $62 million, on Wednesday, according to the company's daily trade update. The superstar investor still has a price target for the stock roughly 300% above Wednesday's close.

That takes total Tesla sales by Ark Invest's exchange-traded funds to around $266 million in September, according to Bloomberg calculations .

Ark did not give a reason for the sales. Insider has contacted the company for comment.

Wood has previously said that she likes to take profit after a company's stock has gained and to try to buy when they dip.

Wood explained her trading approach to CNBC last year. She said that when there's hype around a stock, "we naturally just take profits because we know we're going to get another opportunity associated with controversy to buy the stock lower."

Read more: Ryan Jacob's flagship tech fund has tripled the S&P 500 and returned 1,876% to investors over 24 years. He told us how he's done it, and 5 stocks he expects to lead his portfolio into the future.

Tesla's share price has risen more than 22% over the last three months, and is currently near its highest level since April.

Wood is highly bullish on the Elon Musk-led company, which remains Ark Invest's single biggest holding and made up 10.5% of the $26 billion Ark Innovation ETF as of Wednesday.

She told Yahoo Finance that she thinks the car maker is worth around $3,000, saying she's pleased with its growing market share. Tesla closed at $755,83 on Wednesday.

However, Tesla has been caught up in the global supply-chain problems that are hitting businesses in the US and Europe as economies rapidly reopen.

(Reuters) - Donald Trump has united some of his supporters and detractors in buying shares in his new company and hoping to score a big win. Anthony Nguyen, a 49-year-old software consultant from Austin, Texas, is a Republican who refused to vote for the former U.S. president in last year's election.
POTUS・1 DAY AGO
Markets Insider

Elon Musk's net worth rose to almost $289 billion on Monday, making him the richest person on Earth by a $96 billion margin over Jeff Bezos.
MARKETS・13 HOURS AGO
investing.com

(Bloomberg) -- Few people could have predicted the downward spiral for Alibaba (NYSE:BABA) Group Holding, when founder Jack Ma delivered a blunt criticism of China’s financial system last October. Yet one year on, the technology titan has lost a whopping $344 billion in market capitalization -- the biggest wipe-out of...
STOCKS・1 DAY AGO
24/7 Wall St.

These five incredible blue chip leaders have raised the dividends they pay to shareholders for almost 60 years. The stocks look like great ideas now for worried investors looking for some growth and dependable income.
STOCKS・14 HOURS AGO
GOBankingRates

Tesla "TechnoKing" and CEO Elon Musk has surpassed Amazon's Jeff Bezos by a long-shot as the world's wealthiest billionaire. Musk's net worth, including his Tesla stock holdings, now stands at $281...
STOCKS・1 DAY AGO
MarketWatch

Tesla’s market value surpassed the $1 trillion mark for the first time after American car rental company Hertz placed an order for 100,000 cars with the Elon Musk-owned electric vehicle manufacturer.The EV company’s stocks rose by over 12 per cent on Monday, making Tesla the fifth US firm, and the first automobile company to reach the milestone of $1 trillion market value.Tesla is also the second-fastest company to cross the milestone, only preceded by Facebook, reaching it in just over 11 years since its listing in 2010.The company is currently worth more than the combined market value of the largest...
BUSINESS・16 HOURS AGO
Markets Insider

Billionaire investor David Tepper warns against going all in on stocks, slams bonds, and hints crypto may be a bubble in a new interview. Here are the 8 best quotes.

The Appaloosa Management boss sees crypto as a store of value like gold, and advises investors to hold stocks for the long term.
STOCKS・1 DAY AGO
GOBankingRates

Scott Minerd, global chief investment officer for financial firm Guggenheim, predicts that the stock market could drop 15% by November, according to a report by Business Insider. He blames the...
STOCKS・1 DAY AGO
investing.com

With more than 30% of the companies that make up the S&P 500 reporting earnings this week alone, stock traders knew it would be a hectic one, and some no doubt hoped they could cruise uneventfully through at least the first session of the week before the pandemonium kicked off.
STOCKS・21 HOURS AGO

Elon Musk just made $37 billion in a single day. Here's how much he could owe under the Democrats' new billionaires' tax proposal.

Democrats' plan would tax the kind of on-paper capital gains that Musk, the world's richest person, made as Tesla hit a $1 trillion market value.
STOCKS・5 HOURS AGO
Markets Insider

The red-hot new bitcoin ETF could get too big for its own good and warp the futures market, JPMorgan says

"Contango in the BTC futures curve can impose a drag on performance for these funds due to the futures carry cost," JPMorgan explained.
MARKETS・12 HOURS AGO
Markets Insider

Facebook kickstarts tech earnings, with Microsoft, Alphabet, and Amazon on deck. Investors will watch for any warning of a hit from Apple's changes.
STOCKS・1 DAY AGO
The Motley Fool

Wood has doubled down on Teladoc Health's recent weakness, and investors are worried the telehealth provider will continue to disappoint. Coinbase stock stumbled out of the gate this spring, but better-than-expected profit margins could push it up to a new all-time high. Invitae made a big acquisition near the end...
STOCKS・15 HOURS AGO
24/7 Wall St.

Two relatively under-the-radar stocks put on a real fireworks show Monday. And so did an automaker that reached a valuation of $1 trillion.
STOCKS・12 HOURS AGO
Markets Insider

The ARK chief executive is firmly on the side of the debate that believes the current surge in inflation will likely be short-lived.
BUSINESS・15 HOURS AGO
Markets Insider