The Pentagon is asking 2.9 million service members and contractors to come forward if they have symptoms of the mysterious 'Havana Syndrome' 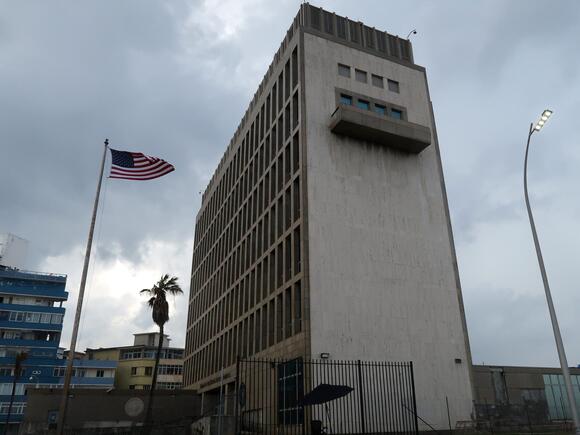 The Department of Defense has asked all military service members, civilian officials, and contractors to report of they have any symptoms of "Havana Syndrome" - a mysterious illness that has struck American diplomats and personnel all over the world.

The New York Times reported that it sent a message, signed by Defense Secretary Lloyd Austin, to 2.9 million military service members and civilians asking them to report any symptoms that line up with the illness, which was first reported in Havana, Cuba, in 2016 .

More than 200 Americans across the world have been infected, The Times reported, in locations including Cuba, China, Russia, and the US.

The memo said that symptoms include nausea, headaches, and vertigo, and told people experiencing them to move out of the area they are in, The Times reported.

The memo was sent as part of an effort to get more information about the incidents, and also to figure out who or what is responsible.

Theories have included pesticides and a microwave weapon.

Common symptoms of Havana Syndrome: fondness for old cars, good cigars, and strong coffee. If not treated immediately, can lead to poverty, political repression, and a strong desire to take rickety boats to Miami! 😅

Marxists DemoncRats say = LETS SPREAD SOME MORE GERMS AROUND AND MAKE AMERICA EVEN MORE UNSAFE!!Please! Bring back President Trump!"President Donald J Trump is one of God’s chosen tough, strong earthly warriors He hand-picked for such evil times as these that we live in today."Rev. Franklin Graham & Billy Graham Amen 🙏 Thank you Jesus!

china coming after our military. China improving their bio weapons daily. biden and obama and fauchi probably still paying for it.

White House press secretary Jen Psaki said President Biden's approval ratings are so low because people are "tired of fighting" the coronavirus pandemic, which Biden promised to "shut down" during the 2020 campaign. A reporter asked Psaki during the White House's Friday press conference why the president's approval ratings have...
PRESIDENTIAL ELECTION・20 HOURS AGO
New York Post

Russian aircraft flew a bit too close to Alaska on Thursday, but apparently did not enter US or Canadian airspace, defense officials said. The planes entered the Alaskan Air Defense Identification Zone, which extends for hundreds of miles around the shore and is monitored for national security purposes, according to the military’s Defense Visual Information Distribution Service.
AEROSPACE & DEFENSE・1 DAY AGO
Bradenton Herald

Recent cases of unexplained health incidents known as “Havana syndrome” have been reported to the U.S. Embassy in Colombia, one government source familiar with the matter told McClatchy. The embassy and national security agencies are investigating the reported cases, one of which affected family members of a U.S. government official,...
PUBLIC HEALTH・10 DAYS AGO
Military News Editor

There have been more than 200 reported cases of unexplained illness known as Havana Syndrome. The State Department officials have been using the term 'Anomalous Health Incidents.'
10 DAYS AGO

Lawmakers Insist Havana Syndrome Is Result of Attacks That Are 'Escalating'

Since 2016, more than 200 U.S. officials working abroad have reported experiencing “Havana syndrome” — a cluster of mysterious, unexplained symptoms including feeling pressure in their heads, dizziness, nausea and fatigue. While the reasons behind the phenomenon are still unclear, Politico reported that the government has turned up new evidence pointing to directed-energy attacks as the cause of the symptoms.
CONGRESS & COURTS・13 DAYS AGO
KGO

President Joe Biden signed into law a bill that provides financial assistance and better health care to victims of "Havana syndrome," the mysterious health incidents affecting dozens of U.S. personnel first identified in Cuba and now including several countries. After a closed-door signing ceremony, Biden said in a statement that...
CONGRESS & COURTS・15 DAYS AGO
NBC News

Colombia to leave 'Havana Syndrome' embassy probe to US

Colombian President Ivan Duque said Tuesday that his government is aware of cases of so-called "Havana Syndrome" at the US Embassy in Bogota, but is leaving the investigation to Washington. "Of course we have knowledge of this situation but I want to leave it to the US authorities, who are doing their own investigation, because it is about their own personnel," Duque told reporters in New York during an official US visit in which he has also visited Washington.
U.S. POLITICS・10 DAYS AGO
POLITICO

The U.S. government’s investigation into the mysterious illnesses impacting American personnel overseas and at home is turning up new evidence that the symptoms are the result of directed-energy attacks, according to five lawmakers and officials briefed on the matter. Behind closed doors, lawmakers are also growing increasingly confident that Russia...
CONGRESS & COURTS・14 DAYS AGO
psychologytoday.com

Three foreign service officials spoke with NBC News about what it's like to be struck with Havana syndrome, how it has affected their lives in recent years, and what they want skeptics to know. Havana syndrome is a mysterious affliction that researchers have yet to figure out, but has affected...
PUBLIC HEALTH・9 DAYS AGO
kisswtlz.com

A bipartisan group of senators is urging Secretary of State Antony Blinken to take immediate action in response to proliferating reports of “Havana Syndrome,” calling cases of the mysterious neurological condition that has sickened hundreds of U.S. officers “a significant, unmitigated threat to our national security,” in a letter sent Wednesday.
CONGRESS & COURTS・9 DAYS AGO
Birmingham Star

Bogota [Colombia], October 16 (ANI/Sputnik): Washington has been secretly investigating possible cases of the so-called Havana Syndrome that allegedly affected some of the staff of the US Embassy in Colombia, El Tiempo newspaper reported on Saturday. The buildings in the districts of El Nogal and Rosales in northern Bogota are...
U.S. POLITICS・7 DAYS AGO
Daily Mail

US Diplomats struck by ‘Havana Syndrome’ share agonizing symptoms of the condition which has left them BRAIN-DAMAGED and destroyed their careers, as they tearfully refute claims illness doesn’t exist

Three Havana Syndrome sufferers have come forward to share the agonizing symptoms of the disease, with two of them claiming it left them brain damaged and destroyed their promising diplomatic careers. Tina Onefur, Kate Husband, and Husband's partner Doug Ferguson were all working for the US State Department, stationed in...
U.S. POLITICS・9 DAYS AGO
wabi.tv

WASHINGTON (WMTW) - Sen. Susan Collins was the lead sponsor of a bill signed into law by President Joe Biden on Friday in response to the so-called Havana syndrome. Havana syndrome gets its name from the U.S. Embassy in Cuba where cases of the mysterious illness first emerged among foreign service officers five years ago.
CONGRESS & COURTS・14 DAYS AGO
WNMT AM 650

WASHINGTON (Reuters) – The State Department on Thursday defended its handling of so-called Havana Syndrome health complaints, after a bipartisan group of U.S. senators said they were concerned the unexplained ailments were not being taken seriously enough. Around 200 U.S. diplomats, officials and family members overseas are believed to have...
U.S. POLITICS・9 DAYS AGO
Shore News Network

Havana Syndrome, a mysterious condition that has affected numerous U.S. officials while serving abroad, has been reported in Colombia, ahead of Secretary of State Antony Blinken’s scheduled visit. U.S. embassy officials in Bogotá, Colombia, have been experiencing “unexplained health incidents,” a term used to describe Havana Syndrome, since mid-September, according...
HEALTH・9 DAYS AGO
MSNBC

Five years after symptoms have come to be known as Havana Syndrome, there have been more than 200 cases around the world, mostly targeting U.S. diplomats. Three of the original Havana victims spoke out, describing the painful symptoms that have caused brain damage, and cut short many promising careers.Oct. 13, 2021.
PUBLIC HEALTH・10 DAYS AGO
WPFO

Maine Senator Susan Collins is among a group of senators calling on the Secretary of State to take immediate action to protect Americans from Havana Syndrome. Dozens of new cases of the mysterious neurological illness have recently been reported in places like Colombia, Austria, and Germany. ['Draconian measures:' Sen. Collins...
CONGRESS & COURTS・8 DAYS AGO