‘I would like more people to come, please’: Pep Guardiola sends message to Man City fans 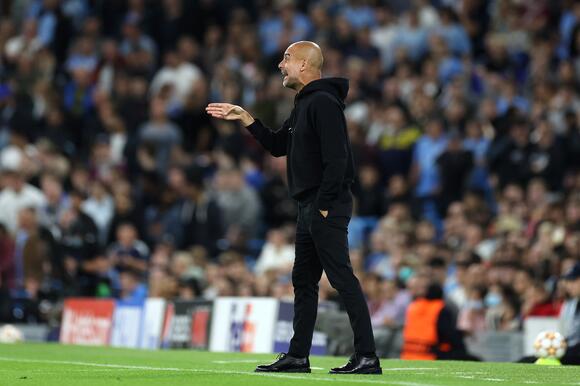 Pep Guardiola has urged more Manchester City fans to attend the Etihad Stadium ahead of Saturday’s clash with Southampton.

The Manchester City manager believes his side may be tired after surviving a thrilling Champions League encounter with RB Leipzig .

Speaking after the 6-3 win, Guardiola urged supporters to turn up and get behind the Premier League champions.

“We will be tired,” Guardiola told BT Sport. “ I know the team from Ralph [Hasenhuttl, Southampton manager] is quite similar to the way [RB Leipzig] play. They are so, so dangerous with good quality and it’s a really important game for us.

“I would say the last three games we played here we scored 16 goals. So I would like to come more people next game on Saturday, we need the people next Saturday. Please.”

“I invite all our people to come next Saturday, 3pm, to watch the game.”

Manchester City have conceded just once in the Premier League so far this season.

That goal came on the opening day against Tottenham - the defending champions sole blemish through the opening four games.

However there were signs of persisting defensive vulnerability against Jesse Marsch’s Leipzig as City’s goal was thrice troubled by the German side.

“They never give up. They have a special way to attack. They play all or nothing,” Guardiola said of how Leipzig were able to challenge the Manchester City defence. 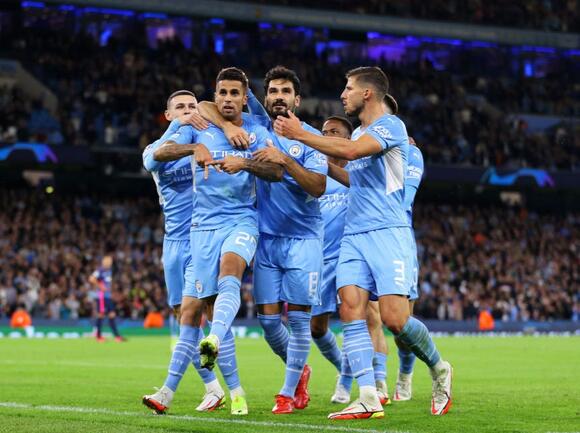 “Against Leipzig, you never have the feeling that it’s over. I would say it was an incredible compliment for the team.

“We knew it and they respond really well but after 2-1 it immediately went 3-1, after they score 3-2 we make it 4-2, we scored a few minutes after they scored and that helped us a lot.”

Guardiola joined City in 2016, following a trophy-laden three-year spell at Bayern Munich, and since arriving in the North-West of England, the Catalan has overseen the Sky Blues dominate the Premier League throughout his time in charge. Under the guidance of Pep Guardiola, Manchester City have won three Premier League...
PREMIER LEAGUE・11 DAYS AGO
Tribal Football

Man City boss Guardiola on unsettled Sterling: I can't give him playing guarantees

Manchester City boss Pep Guardiola has defended his management of Raheem Sterling. Following the news that Sterling may be prepared to Manchester City in search of regular football, Guardiola said he cannot "assure" players of how much they will play. "I cannot assure how many minutes players are going to...
PREMIER LEAGUE・10 DAYS AGO
BBC

Manchester City boss Pep Guardiola speaking to Match of the Day: "After the international break it’s always a little bit difficult to come to a rhythm and I know how good Burnley are. "They did really well, they have good players and we played a good 15-20 minutes in the...
PREMIER LEAGUE・9 DAYS AGO
newschain

Pep Guardiola has expressed surprise at comments from Raheem Sterling that he would consider leaving Manchester City. The City manager, however, admits he could understand why players would want more game time. Sterling, whose contract at the Etihad Stadium expires at the end of next season, said this week he...
PREMIER LEAGUE・10 DAYS AGO

Pep Guardiola hailed Bernardo Silva as extraordinary after champions Manchester City claimed a hard-fought 2-0 win over Burnley on Saturday. Silva, who was linked with a move away in the summer, has been in fine form in the opening months of the season and again stood out in an otherwise disjointed City display at the Etihad Stadium.
PREMIER LEAGUE・9 DAYS AGO
Daily Mail

Phil Foden has agreed a new six-year contract with Manchester City as a reward for his rapid rise under Pep Guardiola. The 21-year-old has become integral to the City team, starring as they reached a first-ever Champions League final last season. That was underlined last week when Foden was named...
PREMIER LEAGUE・12 DAYS AGO
chatsports.com

Pep Guardiola appears to have scored victory in his quest for five substitutions to be permitted in the remainder of the Carabao Cup. As Sportsmail revealed earlier this month, the Manchester City boss was instrumental in a campaign to increase the number of interchanges for the rest of the competition.
PREMIER LEAGUE・11 DAYS AGO
SPORTbible

Manchester United legend Roy Keane claims that Raheem Sterling has “obviously [had] some bust-up” with Manchester City manager Pep Guardiola. Sterling arrived at City in 2015 and has lifted three Premier League titles, four League Cups and an FA Cup during his time at the Etihad. The 26-year-old winger, who...
PREMIER LEAGUE・11 DAYS AGO

The 19-year-old, who scored a hat-trick for Manchester City's EDS side on Saturday, came off the bench to score his first Champions League goal, as the Blues thrashed Club Brugge in Belgium. Manchester City have now scored 13 goals in three European matches this season, as Pep Guardiola's side bounced...
PREMIER LEAGUE・6 DAYS AGO
ClutchPoints

Pep Guardiola sheds some light on the looming uncertainty regarding Manchester City winger Raheem Sterling. In England’s national team, Sterling boasts heavy minutes, often starting in every single marquee match. On the other hand, the winger’s minutes have recently diminished at City, opting for Guardiola to utilize other options on...
PREMIER LEAGUE・10 DAYS AGO
The Independent

Pep Guardiola has told Raheem Sterling that he does not select players based on "what they have done in the past" after the Manchester City winger revealed he would consider leaving the Etihad in search of regular playing time.Sterling has only started once in the Premier League this season since returning from his starring role with England at the summer's European Championship and revealed this week that he would be "open" to playing abroad one day.The 26-year-old's current Etihad contract is set to expire at the end of the next season and, while there is a willingness on both sides...
PREMIER LEAGUE・10 DAYS AGO
The Guardian

Mo Salah scored a hat-trick as Liverpool humiliated a shambolic Manchester United, who were 5-0 down after 50 minutes and had Paul Pogba sent off
PREMIER LEAGUE・1 DAY AGO

The Premier League champions welcome the Clarets to the Etihad Stadium as they try and reduce the gap to the top of the table. Following Liverpool's emphatic 5-0 victory at Watford on Saturday, Pep Guardiola's side will be keen to return to winning ways after their 2-2 draw against Liverpool at the start of October.
PREMIER LEAGUE・9 DAYS AGO
chatsports.com

Pep Guardiola warned that Manchester City have another half-a-dozen academy products ready to make their mark after Cole Palmer's first Champions League goal. The City manager is hoping to keep a lid on the expectation surrounding Palmer but the 19-year-old's stock continues to rise. And Guardiola namechecked a number of...
PREMIER LEAGUE・6 DAYS AGO
punditarena.com

Pep Guardiola had plenty to say about Cole Palmer. Man City boss Pep Guardiola had nothing but praise for his teenage sensation Cole Palmer on Tuesday evening as City ran out easy 5-1 winners away to Club Brugge. City were totally dominant throughout the 90 minutes in Belgium, with Phil...
PREMIER LEAGUE・6 DAYS AGO
chatsports.com

Manchester City manager Pep Guardiola is pleased to see his team get a win after the international break by beating Burnley 2-0. Watch Match of the Day on Saturday 16 October at 22:30 BST on BBC One, BBC iPlayer and the BBC Sport website and app.
PREMIER LEAGUE・9 DAYS AGO
The Independent

One minute you’re starting every week, the next you’re sitting on the substitutes’ bench: such is your lot in life if you are one of Pep Guardiola’s many talented attacking players, all of them hostages to fortune on his roulette wheel of rotation.Unless your name is Kevin De Bruyne, you can never really say you are “in” Manchester City’s starting line-up. But equally, you can never really say you are completely out of it either.As the philosopher Boethius says in 24 Hour Party People, while momentarily down on his luck and homeless on the streets of Manchester: “Mutability is our...
PREMIER LEAGUE・7 DAYS AGO
chatsports.com

Manchester City are a 'possible destination for Bayern Munich striker Robert Lewandowski, the superstar's agent believes' - with veteran targeting four more years at the top in boost to Pep Guardiola

Manchester City are a 'possible destination' for mercurial Bayern Munich striker Robert Lewandowski, his agent has reportedly claimed. Pep Guardiola's pursuit of a new frontman during the recent summer window was well documented, with City's chase for Tottenham ace Harry Kane falling short. Lewandowski was another name rumoured to be...
PREMIER LEAGUE・10 DAYS AGO
FanSided

Manchester City, despite not having a proper number nine in their ranks have done well to challenge for the title thus far and are already being considered as one of the favourites to lift the Premier League title. City are currently sitting third in the points table and are only...
PREMIER LEAGUE・6 DAYS AGO
BBC

Riyad Mahrez scored twice and Cole Palmer got his first Champions League goal for Manchester City as Pep Guardiola's side put in a superb performance to sweep aside Belgian side Club Bruges. The visitors were slick and confident from start to finish as they moved to within one point of...
PREMIER LEAGUE・6 DAYS AGO