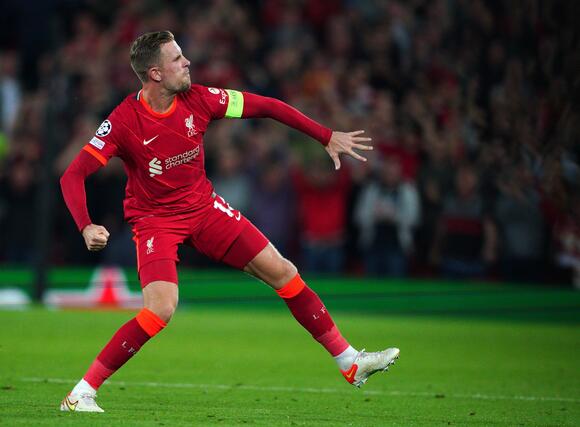 Liverpool captain Jordan Henderson admits the players have to learn from their lapse in focus which made their Champions League victory over AC Milan harder than it should have been.

Jurgen Klopp’s side seemed in full control even after a rare Mohamed Salah penalty miss which followed the early opener when Trent Alexander-Arnold’s shot was deflected in.

But an ill-disciplined couple of minutes just before half-time allowed the visitors, playing their first match in the competition for seven years, to score twice and make the second half more of a challenge than it should have been.

Liverpool’s defence was without the rested Virgil Van Dijk but that should be no excuse as their last two exits in the knockout phase of the competition have been after letting their guard down when in good positions.

While it is still early days in their European campaign Henderson, whose first Champions League goal in seven years secured victory, knows they have to cut out the errors.

“It was a bit of a roller coaster and I’m sure it was very good to watch as a neutral,” said the midfielder.

“I thought for the majority of the game our performance level was really good, obviously we had a spell towards the end of the first half, the last 10 to 15 minutes, where we weren’t quite at it and we were a little bit sloppy and we got punished with two goals.

“I think the performance level for 70-75 minutes was very good and we just need to learn about that 10 to 15-minute spell and make sure that doesn’t happen too often otherwise you’ll get punished at this level.

“Yeah, we made hard work of the game but you’ve got to give credit to Milan. They’re a good side, good players.

“But I thought the boys reacted so well in the second half. We kept going, kept fighting and managed to find a couple of goals to win the game, so overall delighted with the result.”

Klopp made four changes from Sunday’s win over Leeds and, although Van Dijk’s absence was significant, so was that of Sadio Mane who was also rested as Divock Origi received a surprise first start since January having not featured in the manager’s last three squads.

The Belgium international, who scored in the semi-final and final when Liverpool won the Champions League in 2019, put in a performance which offered hope he could still have a part to play despite his previous limited pitch-time and his manager intends to utilise the striker despite him seemingly falling out of favour over the last 18 months.

“In 10 years’ time when we look back he will be a Liverpool legend, but he is too young to be already seen as a legend now so he has to play football,” said Klopp. 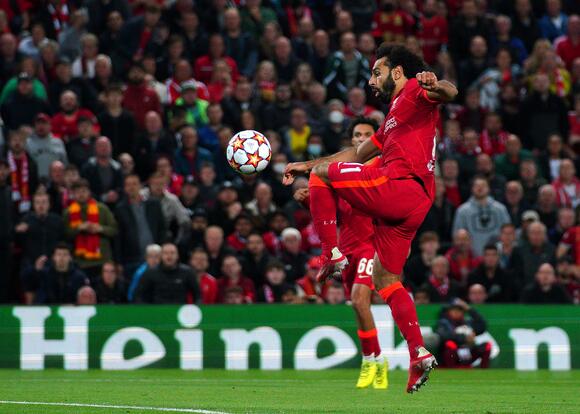 “To be 100% honest I thought he would maybe leave in the summer, but the football world is a crazy place and people obviously forgot how good he is.

“It is really difficult to get into this team. That’s just how it is and I have to decide about different positions, who I bring on, how I want to react before a game.

“That’s why Div was not in, he did nothing wrong. He trains, he gives everything and sometimes you still don’t make it into the squad.

“That really can happen, especially when everybody is fit. But he was the right player to do it and he did really well.

“I’m really happy I could give him the opportunity and that he used it like he did.”

AC Milan striker Olivier Giroud admits Chelsea midfielder N'Golo Kante hates losing. Giroud, who struck up a good relationship with his France team-mate while at Chelsea, has now revealed the fiercely competitive side of Kante many don't see behind closed doors. "We've been playing chess – I have to say...
PREMIER LEAGUE・11 DAYS AGO
Tribal Football

AC Milan coach Stefano Pioli says they're happy to count on Ciprian Tatarusanu against Hellas Verona. Tatarusanu steps up as Mike Maignan faces at least two weeks out after wrist surgery. “Tomorrow he [Tatarusanu] will start, for the others I will look forward to tomorrow morning," he said. “He is...
SOCCER・7 DAYS AGO
Yardbarker

AC Milan continues to discuss a contract extension with their midfielder Franck Kessié, whose deal expires in June. However, it seems as though both parties appear to be far apart in terms of salary. La Gazzetta dello Sport (via Paris Fans) reports that the 24-year-old’s representative has rejected a salary...
PREMIER LEAGUE・11 DAYS AGO
SB Nation

After much haggling, waiting, and anticipating, Tiémoué Bakayoko eventually rejoined AC Milan on loan this summer, signing on for two years in fact with the Rossoneri, who have an option to make the move permanent at some point along the way as well. But Bakayoko’s had a somewhat inauspicious start...
UEFA・13 DAYS AGO

Liverpool target Karim Adeyemi is a wanted many clubs around Europe currently. AC Milan and Inter Milan are the most recent clubs to show interest in the youngster. Adeyemi is one of the hottest German prospects currently. The 19-year-old has played 10 games in the Austrian Bundesliga with RB Salzburg, scoring eight goals and getting one assist.
PREMIER LEAGUE・13 DAYS AGO
Yardbarker

Gianluigi Donnarumma has been given a temporary AC Milan tattoo after he was given a hostile reception on his return to the San Siro. Donnarumma decided not to renew his contract with the Rossoneri in the summer and left on a free transfer to join PSG, something which did not go down well with the fans. This was clearly highlighted during the game at San Siro between Italy and Spain in the Nations League as the 22-year-old was jeered on multiple occasions.
SOCCER・11 DAYS AGO
SB Nation

In Tuesday’s international matches, seven Liverpool players featured in games around the globe with mixed results. Sadio Mane helped Senegal to a 3-1 victory over Namibia in World Cup qualification. They remain top of group H after four games played. In other good results, Andy Robertson led his fellow Scotsmen...
WORLD・10 DAYS AGO
kfgo.com

ROME (Reuters) – Theo Hernandez has tested positive for COVID-19 on his return from international duty with France, AC Milan said on Wednesday. The left back started both of France’s games at the UEFA Nations League Finals in Italy, providing a goal and an assist as the world champions defeated Belgium and Spain to lift the trophy.
UEFA・10 DAYS AGO

Arsenal have one significant issue that manager Mikel Arteta will find difficult to resolve. That is the opinion of their former striker Olivier Giroud, who currently plays for AC Milan. Despite the Gunners spending £150 million in the summer transfer window, Giroud believes they do not have the same consistent...
PREMIER LEAGUE・10 DAYS AGO
SPORTbible

Gianluigi Donnarumma has vowed to get a huge AC Milan crest tattooed on his arm, just days after receiving a brutal reception from fans on his return to the San Siro. The 22-year-old goalkeeper, who made 251 appearances for Milan after making his debut in 2015, left the Italian giants on a free transfer this summer before signing a five-year deal at Paris Saint-Germain.
SOCCER・10 DAYS AGO
Tribal Football

AC Milan have completed the signing of goalkeeper Antonio Mirante. The released Roma keeper joins Milan as a free agent and arrives as cover for Mike Maignan as he undergoes wrist surgery. He is expected to be out of action for 10 weeks. Mirante will wear the Number 83 jersey...
UEFA・10 DAYS AGO
Tribal Football

AC Milan striker Olivier Giroud says Frank Lampard would be a success at Newcastle United. Giroud's former Chelsea manager is being linked with Steve Bruce's job at Newcastle following the club's takeover. He told talkSPORT: "I talked to him a little bit last year. “I think he's looking forward to...
PREMIER LEAGUE・11 DAYS AGO

Scholes: Salah must stay at Liverpool if he wants to win the Ballon d'Or

The Manchester United icon has disclosed what the Egypt international must do to claim football’s biggest individual accolade. Mohamed Salah must stay at Liverpool or continue his professional career to stand a chance of winning the Ballon d'Or, according to former England and Manchester United star Paul Scholes. Thanks to...
PREMIER LEAGUE・7 DAYS AGO
Tribal Football

Free agent Antonio Mirante is set for an AC Milan medical. Mirante will undergo a medical on Wednesday and sign a one-year contract with Milan after Mike Maignan had to undergo surgery on his wrist. Maignan was injured while on international duty with France leaving Milan short of goalkeeper options.
UEFA・11 DAYS AGO
Tribal Football

The agent of Antonio Mirante admits an offer from AC Milan came out of the blue. A free agent after leaving Roma over the summer, Mirante is signing for Milan today after it was announced Mike Maignan requires wrist surgery. Agent Valerio Giuffrida told TMW: "We did not have previous...
SOCCER・10 DAYS AGO
RealGM

Barcelona and AC Milan have interest in Jesse Lingard as he approaches the end of his contract. Lingard's deal expires in the summer and he can begin negotiating with rival clubs beginning on Jan. 1. The opportunity to sign an experienced England international on a free transfer during a time...
PREMIER LEAGUE・9 DAYS AGO
Tribal Football

AC Milan striker Olivier Giroud says he's delighted to be playing in Serie A. Giroud arrived in the summer from Chelsea. “I'm very proud to play for Milan and in Serie A," Giroud told the official channel of Serie A TIM. “It was the League I watched when I was young.
SOCCER・12 DAYS AGO
Tribal Football

AC Milan midfielder Brahim Diaz says he's enjoying his football this season. Diaz scored in the home win against Venezia in September and said the goal in front of the fans was 'incredible'. He scored four times in Serie A 2020-21, but the goal against the ArancioNeroVerde was his first...
SOCCER・13 DAYS AGO
Tribal Football

Manchester United's key midfield transfer target Franck Kessie could be available for free in the summer. The Red Devils are very eager to add a defensive minded central midfielder, either in January or in the summer transfer window. His current club Milan have offered Kessie a new contract, but the...
PREMIER LEAGUE・10 DAYS AGO
Tribal Football

AC Milan coach Stefano Pioli is counting on summer signings Junior Messias and Tiemoue Bakayoko returning to full fitness. Bakayoko suffered a muscle injury after playing in the 2-0 win against Lazio. Messias, meanwhile, returned to action in the last 16 minutes of the 3-2 win over Atalanta last time.
SOCCER・14 DAYS AGO