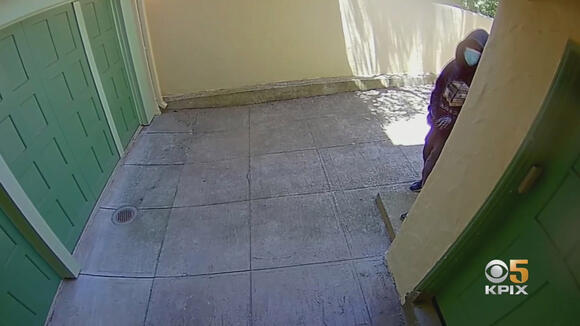 BERKELEY (KPIX 5) — An elderly Berkeley couple are seeking answers after they said a thief was able to steal a 300 pound safe from their home, containing an estimated $500,000 in jewelry and other valuables.

The victims told KPIX 5 that police responded right away but the couple quickly discovered the department just didn’t have the resources to fully investigate and help them get their family treasures back.

According to the couple, the burglar entered the home and knew exactly where to go. He went upstairs and dragged the safe on the hardwood floor, using a quilt off a bed to get it down the stairs.

The victims, who did not want to be identified, were stunned.

“It was oh my God, the entire safe had been stolen,” the male victim told KPIX 5.

The safe contained items that were passed on by family members and treasures they hoped to one day pass on to their grandchildren.

“There are valuable things inside a safe but more importantly, there are priceless memories,” the female victim said.

It even contained a $5 gold piece, owned by her great great grandfather, who was a key figure in the abolitionist movement.  “I like to think he held the coin and maybe Abraham Lincoln did too,” she said.

The couple said their home was one of three broken into on the same day in the area, targeting elderly homeowners in their 70s and 80s. They are hoping someone might recognize the man seen in their surveillance video.

Surveillance photo of man suspected of stealing a safe from a Berkeley couple’s home. (CBS)

A $40,000 reward is being offered, no questions asked, for the return of the safe.

“This could be a good kid deep down inside and maybe it’s enough it can turn somebody’s life away from making money this way,” the couple said.

According to the victims, the case is being handled through their private investigator. Anyone with information is asked to call 415-961-0980.

DEDHAM (CBS) — An eight-week-old puppy that was stolen from a house in Dedham Sunday night has been reunited with its owner. A dirt bike, jewelry, cash, shoes, and documents were also taken, according to police. Officers were called to a home on Bussey Street around 8:20 p.m. The homeowner...
DEDHAM, MA・9 DAYS AGO
salyersvilleindependent.com

RT 30 – The family of a recently deceased woman is trying to find items that have been stolen from her home last week. Family members of Allene Arnett, who passed away on August 31, went to her home on Sunday evening to check on the house and noticed it had been burglarized. The house had been ransacked, but the family had already removed the items from the home they wanted to keep. However, an outbuilding had been broken into and a brand-new generator, a mower, two window air condition units and several weed eaters.
PUBLIC SAFETY・14 DAYS AGO
WCIA

Family is looking for answers after vintage car is stolen

CHAMPAIGN, Ill. (WCIA) – One Champaign family is looking for answers after their home was broken into and a vintage car was stolen. Harold Zahnd made a post on Facebook asking for help. He said his father’s vintage ’69 Chevrolet SS Nova was stolen over the weekend. They’re looking for any information to get it […]
CHAMPAIGN, IL・10 DAYS AGO
WTKR News 3

A Norfolk man is getting the word out after he told News 3 someone stole hundreds of dollars' worth of Halloween decorations right off his front porch.
NORFOLK, VA・2 DAYS AGO

Man wanted for questioning after packages stolen from Scranton home

SCRANTON, LACKAWANNA COUNTY (WBRE/WYOU) — Police in Scranton are looking for information on a man they say stole packages from the front porch of a home. The Scranton Police Department says the theft happened Sunday on the 700 block of Moosic Street just before 4:00 p.m. The items stolen were valued at more than $700, […]
SCRANTON, PA・11 DAYS AGO
WBOC

DEWEY BEACH, Del.- Dewey Beach police have launched an investigation after someone entered a vehicle and stole an urn containing the ashes of a Pennsylvania family's loved one. Police said that on Sunday, Oct. 10, the family gathered in Dewey Beach for a recently deceased family member’s celebration of life....
PUBLIC SAFETY・11 DAYS AGO
610KONA

Boat Stolen From Home in Pasco

(Pasco, WA) — Police are looking for the suspect or suspects responsible for stealing a boat parked outside a home in Pasco over the weekend. The watercraft disappeared from the 2500 block of Rd 80 sometime between 5 p.m. Saturday night and 4 a.m. Sunday morning. It’s a 1988 Bayliner Ciera Sunbridge with registration WN6031LE.
PASCO, WA・4 DAYS AGO
WPRI 12 News

CENTRE COUNTY, Pa. (WTAJ) — State police are investigating a robbery Friday after thousands of dollars were stolen from a Centre County home. Troopers say the robbery occurred between Sept. 20 and Sept. 23 at a residence along North 11th Street in Philipsburg Borough. An unknown individual(s) reportedly stole $7,000 from the home. State police […]
CENTRE COUNTY, PA・14 DAYS AGO
ABC13 Houston

Malik Barlow was present when the trial started, but he didn't return after the first day. The trial went on without him though.
HOUSTON, TX・10 DAYS AGO
CBS San Francisco

Puppy Recovered After Being Stolen From Pacifica Home; Suspect Arrested

PACIFICA (CBS SF) — A puppy was recovered after being stolen from a home in Pacifica and a suspect was arrested, police said Monday. On Saturday at about 3:40 p.m., officers were called to a home on the 100 block of Shoreview Ave. by a resident who reported a nine-month Yorkshire terrier mix was taken from the front yard of the home some 20 minutes prior. Pacifica police said the theft was captured on surveillance video. Officers conducted an extensive search of the area but did not find the puppy. At about 4:30 p.m., officers were alerted about a disturbance at the Pacific...
PACIFICA, CA・10 DAYS AGO
Times and Democrat

The Pennsylvania State Police are investigating the theft of a stolen vehicle in Wayne Township early Tuesday. According to Troopers from the Schuylkill Haven Barracks, on Tuesday, October 12th, 2021, around 6:30am, police responded to a report of a theft of a motor vehicle. An investigation showed that around 5:430am on Tuesday, a silver Kia Sedona, bearing PA Registration of JGA0592 was stolen from a home on Indian Drive near Auburn.
PENNSYLVANIA STATE・8 DAYS AGO
fox4kc.com

KANSAS CITY, Mo. — On Friday night, Yasmin Saban tearfully pleaded for someone to return her stolen dog, Lola. Then on Saturday morning, tears of joy rolled down Saban’s face as an anonymous person did precisely that. “So Saturday morning, I get a message on Facebook and I’m just told,...
KANSAS CITY, MO・10 DAYS AGO
KDVR.com

Food truck stolen from in front of Littleton home

A food truck owner suffered the theft of his food truck from in front of his Littleton home. Joshua Short reports.
LITTLETON, CO・3 DAYS AGO
WAVY News 10

A family that lives in a quiet part of Chesapeake says they had valuable construction equipment taken from almost two weeks ago.
CHESAPEAKE, VA・4 DAYS AGO

MILPITAS (CBS SF) — A stolen vehicle suspect who exchanged gunfire with Milpitas police in a crowded shopping center parking lot last week has died from his wounds. Milpitas police said the suspect — Michael Edward Nelson Jr. — succumbed to his wounds on Tuesday. The incident took place Friday afternoon as detectives were investigating a stolen vehicle that was located in the Milpitas Square Shopping Center parking lot. But instead of surrendering to police, Nelson got out of the vehicle and began firing at the detectives, resulting in a prolonged exchange of gunfire in the parking lot filled with vehicles. Nelson...
MILPITAS, CA・2 DAYS AGO
CBS San Francisco

SANTA ROSA (CBS SF) — Two people were arrested in Sonoma County after a woman found her car had gas stolen from it through a hole drilled in her gas tank. The Sonoma County Sheriff’s Office said in a post on its Facebook page that the incident happened Wednesday evening at Shiloh Ranch Regional Park in the Larkfield-Wikiup community north of Santa Rosa. A woman who went on a hike at the park returned to her vehicle, noticed the smell of gasoline, and saw a suspicious person standing next to her car, the sheriff’s office said. She also noticed gasoline all over...
SONOMA COUNTY, CA・20 HOURS AGO
WJW FOX 8 News Cleveland

Suspect jumps from stolen car before it crashes into Medina home

Medina police arrested two juveniles suspected of breaking into one vehicle and stealing another.
MEDINA, OH・15 DAYS AGO
kggfradio.com

A motorcycle was stolen from a Caney property late Wednesday night. The theft occurred in 700 block of North State St. Neighbors reported suspicious activity and observed a male taking a 1989 Harley Davidson from the property. The suspect pushed the motorcycle down the street before starting it and driving...
CANEY, KS・14 DAYS AGO