Leicester vs Napoli live stream: How to watch Europa League fixture online and on TV tonight 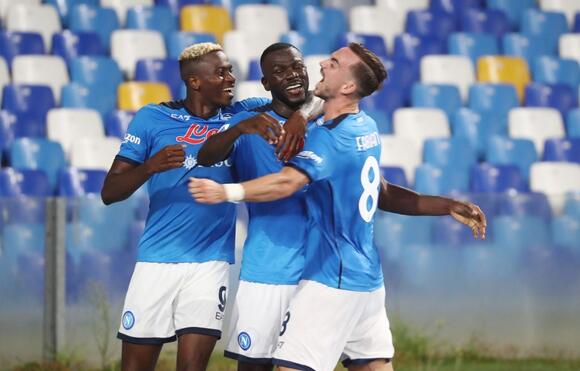 Leicester City entertain Serie A side Napoli in the first match of their Europa League campaign on Thursday night.

Having just missed out on Champions League action once again with a fifth-place finish in the Premier League last term, the Foxes are in Group C of Europe’s second competition, along with Spartak Moscow and Legia Warsaw.

Brendan Rodgers will be hoping to guide his side through the group stage into the last 32 - and there finally pick up a long-overdue first victory in a European knock-out tie of his entire managerial career.

Napoli make for a tough first opponent, though, with the Italian side having just beaten Juventus domestically at the weekend and remaining with a 100 per cent league record so far.

When is the game?

The match kicks off at 8pm on Thursday 16 September at the King Power Stadium.

All Europa League and Champions League games are on BT Sport again this season. The match will be shown live on BT Sport 2 and BT Sport Ultimate, while subscribers can stream it via the BT Sport app or desktop website.

Long-term injury absentees Wes Fofana and James Justin are still nowhere close to a return for Leicester, while Nampalys Mendy is also out. Ayoze Perez can play as his suspension is domestic only. Brendan Rodgers might give Patson Daka a full debut and Jonny Evans is expected to start too - the key centre-back is yet to do so this term.

Napoli are without a host of squad players including Diego Demme, Faouzi Ghoulam and goalkeeper Alex Meret. Forward Dries Mertens is also out and the inspirational Lorenzo Insigne is another big doubt. There could be issues at left-back too if Mario Rui doesn’t recover.

The Foxes will have to work hard and keep the line-up as close to full-strength as possible to get a decent result at the start of the group campaign. Leicester 1-1 Napoli .

Napoli faces Fiorentina in a Serie A match on Sunday, October 3, 2021 (10/3/21) at the Stadio Artemio Franchi in Firenze, Italy. Fans can watch the match for free via a trial of Paramount+. Here’s what you need to know:. What: Serie A. Who: Fiorentina vs. Napoli. When: Sunday, October...
UEFA・14 DAYS AGO
CBS Sports

Atalanta host AC Milan on Sunday with an opportunity to move closer to the Serie A summit. The visitors are in good form and unbeaten in six so far this season, just two points behind leaders Napoli. Meanwhile, Atalanta are seventh with 11 points after a slower start than expected which has not been made any easier by Robin Gosens' injury. The Gewiss Stadium clash offers La Dea a chance to gain some ground on the likes of Milan.
SOCCER・14 DAYS AGO
NBC Sports

Crystal Palace vs Leicester: The Eagles and Foxes both find themselves in the bottom half of the Premier League table ahead of their clash at Selhurst Park on Sunday (Watch live at 9 am ET, on NBCSN and online via NBCSports.com). Patrick Vieira’s tenure as Crystal Palace boss began with...
PREMIER LEAGUE・14 DAYS AGO
chatsports.com

WELCOME TO THE WANDA METROPOLITANO!!! The spectacular home of Atlético Madrid is the site of a huge La Liga game between the defending champions and Barcelona, who come into this one looking to rebound from a bad loss in Europe and trying to upset the Colchoneros. This should be fun, and you’re welcome to join us to follow and comment all the action. Vamos!
UEFA・14 DAYS AGO

Thomas Tuchel has admitted Premier League managers have little choice but to accept losing top players for pivotal matches due to international commitments.Thiago Silva will miss Saturday’s trip to Brentford due to his Brazil duties, with the experienced centre-back not even expected back in England until 24 hours before the match.Antonio Rudiger has returned from Germany action with a back injury and will miss the Bees clash, though Romelu Lukaku is fit to feature after muscle soreness cut short his time with Belgium.Tuchel believes football’s top talents simply play too many matches, but also revealed elite managers feel as though...
UEFA・2 DAYS AGO
TechRadar

Pep Guardiola will be looking for an instant response following their midweek Champions League defeat, as they head to a rocking Anfield for this crucial clash in the title race. Read on to find out how to watch Liverpool vs Man City online and get a Premier League live stream, no matter where you are in the world right now.
PREMIER LEAGUE・14 DAYS AGO
The Independent

Is Crystal Palace vs Leicester on TV today? Kick-off time, channel and how to watch Premier League fixture

Having been denied at the death by rivals Brighton, Crystal Palace take on Leicester City at Selhurst Park seeking only their second win of the Premier League season.There has been plenty to be optimistic about under new manager Patrick Vieira, with the performances of Conor Gallagher and Wilfried Zaha among those catching the eye, but a return of six points from six games represents a middling start.The same could be said of Leicester, who have tallied just one more point and were held at home by Burnley last weekend.Having travelled back from Poland after their Europa League exertions against Legia...
PREMIER LEAGUE・14 DAYS AGO
CBS Sports

The United States men's national team continues their World Cup qualifying campaign on Thursday when they welcome Jamaica to the Lone Star State as part of Matchday 4. With the Americans' qualifying campaign in a shaky position after back-to-back draws to start, Gregg Berhalter's team came through with a much-needed 4-1 win at Honduras last time out to get things back on track. With three games over the next week and a half, getting six points or more would put the U.S. in fantastic spot moving forward in qualifying.
MLS・10 DAYS AGO

Italy vs Spain live stream and how to watch the UEFA Nations League semi-finals for free online and on TV, team news

The UEFA Nations League is back and we've reached the semi-finals stage, with Italy vs Spain the first to be played with kick-off at 7.45pm BST tonight. The remainder of the competition will be played out in Italy, giving tonight's home side something more of a home advantage than intended. Make sure you know how to watch an Italy vs Spain live stream wherever you are.
MLS・10 DAYS AGO
Insider

An 18-year-old Barcelona sensation was just given a $1.2 billion price tag, making him soccer's most-valuable-ever player

Spanish sensation Pedri joins Karim Benzema in being one of only two players valued at over $1 billion in world soccer.
SOCCER・2 DAYS AGO
The Independent

Italy take on Belgium in the UEFA Nations League final on Sunday afternoon, in a repeat of the EURO 2020 quarter-final.The Italians were the winners on that night on their way to winning the entire tournament, but lost to Spain in the Nations League semi-final earlier this week, meaning they missed out on a place in the final of Europe’s newest international competition.Belgium, meanwhile, threw away a two-goal lead against France, ultimately losing 3-2 thanks to a stoppage-time winner from AC Milan full-back Théo Hernandez.When is kick-off?The match kicks off at 14:00 BST on Sunday 10 October, taking place at...
SOCCER・8 DAYS AGO
The Independent

Andorra vs England live stream: How to watch World Cup qualifier online and on TV

England take on Andorra in World Cup qualifying on Saturday evening as the Three Lions look to cement their place at the top of Group I.England are currently in pole position to clinch the sole automatic qualification spot for the 2022 World Cup in Qatar, four points clear of Albania and five points ahead of Poland having each played six games.FOLLOW LIVE: Team news and match updates as England play AndorraGareth Southgate’s side have the luxury of some straightforward fixtures to see out the campaign, with a trip to group minnows San Marino awaiting on the final day of matches...
SOCCER・7 DAYS AGO

Matchday 10 in CONMEBOL's World Cup qualifying competition will see sixth-place Paraguay host second-place Argentina in Asuncion on Thursday night. The hosts are 2-5-2 and just two points behind the playoff spot that is given to fourth place. The Copa America champions, meanwhile, are comfortably in second with a 5-3-0 record, looking well on their way to qualify for next year's 2022 World Cup.
SOCCER・9 DAYS AGO
The Oregonian

Following their incredible come-from-behind win to reach the final, the France national team take the pitch today in a matchup against the Spain national team in the UEFA National League tournament final today. This international soccer showdown kicks off on Sunday, October 10 at 11:45 a.m. PT/2:45 p.m. ET at San Siro Stadium in with a live broadcast on ESPN.
SOCCER・6 DAYS AGO
Tom's Guide

The Norwich City vs Brighton & Hove Albion live stream will see the high-flying Seagulls take on the struggling Canaries. The home side have yet to win a Premier League game this season, but getting that first victory against Brighton will be no easy task, as the south coast side are among the most in-form teams in the division.
PREMIER LEAGUE・2 DAYS AGO
Tom's Guide

The Newcastle United vs Tottenham Hotspur live stream will see a new era begin on Tyneside after the club was taken over by a consortium backed by the Saudi Arabian Public Investment Fund last week. The team may be in poor form, but expect the atmosphere at St James' Park to be rocking; can Spurs spoil the party?
PREMIER LEAGUE・2 DAYS AGO
Tom's Guide

Two teams at opposite ends of the table face each other in the Manchester City vs Burnley live stream. The game kicks-off at 3 p.m. BST (10 a.m. ET) on Saturday (October 16), as the home side look to continue their title challenge, while their opponents are already in a fight against relegation.
PREMIER LEAGUE・2 DAYS AGO
CBS Sports

By the time Premier League leaders Chelsea have made the seven-mile journey across west London to Lionel Road, their spot on the summit could be lost. They will do well to gain it back against a Brentford side who have already proven to be a challenge for top opposition at home this season.
PREMIER LEAGUE・2 DAYS AGO