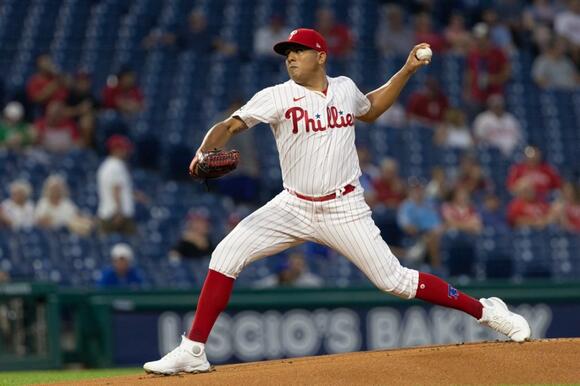 Andrew Knapp scored on a walk-off passed ball to give the Philadelphia Phillies a 6-5 win against the visiting Chicago Cubs in the second game of their three-game series on Wednesday night.

Knapp singled to lead off the ninth and was on third with two outs when a breaking ball from Trevor Megill (1-2) appeared to cross-up catcher Robinson Chirinos. The ball hit his glove and caromed toward the third-base dugout, allowing Knapp to score easily.

J.T. Realmuto and Freddy Galvis both homered and each delivered three hits for the Phillies (73-72), who had dropped six of their previous seven games and now sit 2 1/2 games back of the second NL wild-card spot.

Matt Duffy had three hits, including a tying solo home run to lead off the ninth for the Cubs. Chirinos hit a tying two-run homer in the eighth, and Frank Schwindel also homered for Chicago (66-80).

Phillies reliever Jose Alvarado had a two-run lead when he started the eighth, but gave up a two-run homer to Chirinos to tie the score 4-4.

Realmuto led off the bottom half of the eighth with an opposite-field homer off reliever Codi Heuer to move the Phillies back ahead by a run, but they gave it back when Duffy homered off Ian Kennedy (2-1) to lead off the ninth and tie the score 5-5.

Phillies starter Ranger Suarez allowed two runs and six hits over six innings. He struck out eight and walked one in his ninth straight start since getting promoted from the bullpen. 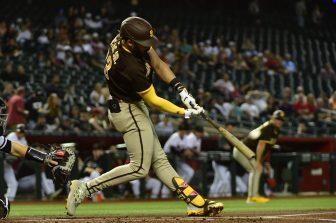 Suarez had pitched at least five innings and allowed one run or fewer in his previous four starts, but won just one of those outings.

Bryce Harper doubled to lead off the fourth inning and scored on a double play for a 1-0 lead.

Andrew McCutchen worked a walk before Galvis lifted a 2-0 pitch over the fence in right for a 3-0 lead.

Duffy led off the fifth inning with a double down the left-field line. Schwindel followed with a two-run homer to right to make it 3-2.

Suarez helped himself with a leadoff double in the fifth. He eventually scored on a two-out single by Realmuto on the first pitch from reliever Scott Effross, extending the lead to 4-2.

While there are sure to be some free agent signings and wheeling and dealing by Jed Hoyer this offseason, it’s a good bet that a few of your favorite September (and October) Chicago Cubs will still be playing with the team in 2022. We know that won’t be the case for all 67 of the guys the Cubs have used this season, but there’s reason for hope for a few of the bright spots amongst the new-look end of summer North Siders.
MLB・18 DAYS AGO
FanSided

Will the Chicago Cubs move past the World Series champion core for good this winter? Or is a reunion (or reunions) in the cards? That’s been heavily debated among fans for the past month-and-a-half or so after Jed Hoyer sold off everything not bolted down at the July 30 deadline.
MLB・27 DAYS AGO
Bleacher Report

I enjoy putting together fake trade ideas. It forces me to assess other organizations, and their potential assets. If I’m doing my homework properly, I’m executing an idea that’s logical for both sides, not one that’s a slam-dunk for the Cubs. I try to assess needs and mindsets on both sides, and if I come relatively close, you might learn something for coming along for the ride. If the Cubs are trading from the MLB roster this off-season, trading from strength makes the most sense.
MLB・10 DAYS AGO

CHICAGO (AP) - The Chicago Cubs have hired Carter Hawkins as their general manager, dipping into Cleveland’s front office in an effort to bolster their own player development system. The 37-year-old Hawkins spent 14 seasons with Cleveland, including the last five as an assistant general manager. He also supervised the team’s player development department. The Cubs plan to formally introduce Hawkins as the franchise’s 16th GM next week.
MLB・6 DAYS AGO
Chicago Tribune

From Lance Lynn to Craig Kimbrel: Grading 10 Chicago White Sox roster additions on how they fared for the 2021 AL Central champs

The Chicago White Sox were one of the more aggressive teams last offseason. Then when injuries popped up throughout the season, they used a mix of internal and external options to try to fill the voids. The Sox were also active at the trade deadline, attempting to position themselves for the postseason. Some moves worked, others didn’t pan out for the American League Central champs, whose ...
MLB・2 DAYS AGO
Sportsnaut

Boston Red Sox fans let Kyle Schwarber have it for letting a pop-up land on the infield, and he probably had it coming. If you let Schwarber play first base long enough, something like this was bound to happen. The Sox knew this when they acquired him from the Washington Nationals, and they sure as hell didn’t trade for him because of his defensive ability.
MLB・26 DAYS AGO

The Chicago White Sox were eliminated from the playoffs on Tuesday after losing Game 4 of their American League Division Series, 10-1, to the Houston Astros. The White Sox, specifically manager Tony La Russa, did not go quietly into the winter, however. Rather, La Russa made it clear that he...
MLB・8 DAYS AGO
New York Post

The internet never forgets. Former New York Yankees slugger Alex Rodriguez has been covering the 2021 MLB playoffs by resuming his role as a studio analyst for FOX Sports. Last week, Rodriguez was analyzing the American League Division Series between the Boston Red Sox and Tampa Bay Rays with David Ortiz, Frank Thomas and Kevin Burkhardt. The gang was discussing a video clip from Game 1, when the Rays were seen eating popcorn in the dugout during the seventh inning of their 5-0 win.
MLB・8 DAYS AGO
KAJA KJ 97

Astros fans were living for these guys.
MLB・21 DAYS AGO
USA TODAY

"When you are doing (an interview) live something usually always happens," Dusty Baker said explaining his on-air reaction to Kiké Hernandez's homer.
MLB・5 DAYS AGO
Yardbarker

Baseball fans are about to see more of Joc Pederson over the next week as his Atlanta Braves get set to face the Milwaukee Brewers in the NLDS. There is something fans should know about him: he just started wearing a pearl necklace during games. Yes, beginning last week, Pederson...
MLB・15 DAYS AGO
Audacy

Josh Donaldson has been following his former team rather closely this October and the former Atlanta Braves slugger and current Minnesota Twins third baseman had some thoughts about Tuesday’s Game 3 NLCS against the Los Angeles Dodgers. Donaldson was live-tweeting during the game and began to tear into the Dodgers...
MLB・1 DAY AGO
FanSided

Max Scherzer started the Wild Card game for the Los Angeles Dodgers tonight. He did not make it through the fifth inning. While Scherzer gave up just one run, Dodgers manager Dave Roberts pulled his ace with one out and two men on in the top of the fifth inning.
MLB・14 DAYS AGO
Larry Brown Sports

The umpires for Game 5 of the ALCS between the Boston Red Sox and Houston Astros at Fenway Park in Boston investigated an issue with a light midway through the game on Wednesday. Just as the top of the sixth was about to begin, FS1’s Joe Buck explained a situation...
MLB・22 HOURS AGO