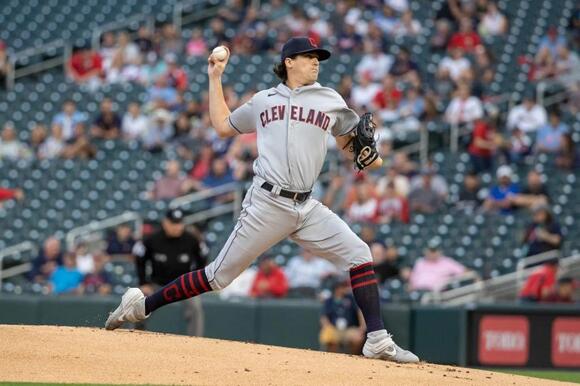 Oscar Mercado, Bobby Bradley and Franmil Reyes each homered as the Cleveland Indians cruised to a 12-3 victory over the host Minnesota Twins in the rubber game of their three-game series on Wednesday night.

Jose Ramirez went 3-for-4 with two RBIs and two runs scored, Myles Straw and Reyes each had three hits, and Bradley added two hits and three RBIs for Cleveland (71-73) which finished with 14 hits.

Cal Quantrill (6-3) won his second consecutive start against the Twins allowing three runs (none earned) on two hits — both by Miguel Sano — over 6 2/3 innings. He walked three and struck out four.

Sano homered and doubled and had three RBIs for Minnesota (64-83) which lost for the sixth time in its last eight games. Griffin Jax (3-4) suffered the loss allowing five runs (three earned) on seven hits over 4 2/3 innings while striking out three.

Cleveland took a 1-0 lead in the fourth when Ramirez doubled high off the wall in right-center and scored one out later on Bradley’s line-drive double into the gap in left-center.

The Indians extended their lead to 5-0 in the fifth on Mercado’s fifth homer of the season, a three-run drive to left, and a sacrifice fly by Ramirez, driving in Straw who had doubled.

Cleveland then broke the game open with a five-run seventh highlighted by Bradley’s 13th homer of the season, a two-run shot into the second deck in right, and RBI singles by Ramirez and Reyes.

The Twins cut it to 10-3 in the bottom of the seventh on Sano’s 28th homer of the season, a 420-foot three-run drive to left. The home run came after Max Kepler reached base on a walk that featured Bradley dropping a foul popup that would have been the third out of the inning.

The Indians made it 11-3 in the eighth when Bradley Zimmer grounded into a bases-loaded double play and Reyes finished the scoring with his 29th home run of the season, a 403-foot drive into the second deck in left leading off the ninth.

Ramirez went 2-for-5 with three RBI, a steal and a run scored in Friday's 9-6 win over the Rangers. Ramirez knocked a two-run single in the third inning and brought home another run with a base knock in the fourth. After starting the month in an 8-for-41 (.195) skid, the switch-hitting star has gone 22-for-60 (.367) with 15 RBI over the last 17 games. He's now sporting an .896 OPS with 103 RBI and has tied his career high with 110 runs scored.
MLB・14 DAYS AGO
minnesotasportsfan.com

Twins to Make Another Run at Extending Byron Buxton

Byron Buxton is quickly becoming the most clamored for contract extension that we’ve seen from this Minnesota Twins fanbase since Joe Mauer, before the Pohlads wrote him a $184 million check to be cashed over 8 seasons. Good or bad. President of Baseball Operations, Derek Falvey and his General Manager,...
MLB・14 DAYS AGO
Minneapolis Star Tribune

KANSAS CITY, MO. — You never forget your first big-league start, and in Griffin Jax's case, it came at Kauffman Stadium almost exactly three months ago. But Jax may want to substitute the memory of his final start of 2021, on the same Kansas City mound, for that one. Jax...
MLB・14 DAYS AGO
KSN News

KANSAS CITY, Mo. — — Byron Buxton and Jorge Polanco hit homers and the Minnesota Twins beat the Kansas City Royals 7-3 Sunday in their final game of the season. Royals star Salvador Perez went 0 for 2 with a walk and finished in a tie with Toronto’s Vladimir Guerrero Jr. for the big league home run lead with 48. Perez wound up matching the team […]
MLB・12 DAYS AGO

The Indians have found a very simple and effective formula for success. “I’m not the smartest guy in the world,” Madison Central coach Mike Holcomb said. “But, if something is working, you stick with it.”. The Indians stuck with that gameplan once again on Friday against long-time district rival Clark...
HIGH SCHOOL・21 HOURS AGO
Sportsnaut

MLB.com is keeping track of all the latest news and rumors surrounding three-time Cy Young Award winner Max Scherzer, who can become a free agent this offseason. Scherzer labored in his National League Wild Card Game start against the Cardinals on Wednesday, walking three batters and throwing 94 pitches over 4 1/3 innings, but he limited St. Louis to one run and the Dodgers advanced on Chris Taylor's walk-off homer.
MLB・9 DAYS AGO

The Chicago White Sox acquired reliever Craig Kimbrel from the Chicago Cubs at the trade deadline anticipating he would help fortify their bullpen for a World Series run. Instead, Kimbrel was a disaster on the South Side. A closer with the Cubs and throughout his big league career, the White Sox tried to use Kimbrel as a setup man.
MLB・3 DAYS AGO
NJ.com

The internet never forgets. Former New York Yankees slugger Alex Rodriguez has been covering the 2021 MLB playoffs by resuming his role as a studio analyst for FOX Sports. Last week, Rodriguez was analyzing the American League Division Series between the Boston Red Sox and Tampa Bay Rays with David Ortiz, Frank Thomas and Kevin Burkhardt. The gang was discussing a video clip from Game 1, when the Rays were seen eating popcorn in the dugout during the seventh inning of their 5-0 win.
MLB・3 DAYS AGO
NJ.com

To err is human. And no doubt Joe West has made his fair share of mistakes during his four decades a big-league umpire. During Sunday’s game between the New York Yankees and Boston Red Sox, the Boston Globe’s Pete Abraham tweeted the following:. Joe West on the plate tonight. He...
MLB・19 DAYS AGO
Los Angeles Times

A check swing is unlike any other call in baseball. It isn't defined in the rule book, is often deferred from one umpire to another, and can't be reviewed.
NFL・1 DAY AGO

San Francisco Giants fans and Los Angeles Dodgers fans had a touching moment of unity during Game 5 of the NLDS Thursday night in expressing their collective disdain for a Giants fan sitting behind home plate. The fan, who was wearing a jersey, hat and necklace/chain of some sort, frequently...
MLB・1 DAY AGO
Sportsnaut

Did an Astros ball boy cost the Red Sox a run on Friday night?. The video evidence makes a compelling case. In the third inning of a 5-4 loss in Game 1 of the American League Championship Series, the Red Sox had two on and one out when Hunter Renfroe ripped a double that appeared ticketed for the left field corner.
MLB・11 HOURS AGO
USA TODAY

Dodgers manager Dave Roberts said it was an organizational decision to start Corey Knebel in Game 5, instead of Julio Urias against the Giants.
MLB・2 DAYS AGO
KESQ News Channel 3

The Los Angeles Dodgers are going to the National League Championship Series! The Dodgers beat the Giants in San Francisco in a critical and nerve-racking winner-take-all Game 5 of the National League Division Series. The game was 0-0 up until both teams scored in the 6th inning. Mookie set the table. Corey delivered. pic.twitter.com/QJdAVFhzMK— Los The post Dodgers beat Giants to advance to the NLCS appeared first on KESQ.
MLB・1 DAY AGO
hawaiitelegraph.com

Paul Goldschmidt delivered the game-winning hit in the bottom of the ninth as the St. Louis Cardinals edged the visiting Chicago Cubs 4-3. Tyler O'Neill produced two homers, a double and three runs scored for the Cardinals (90-70), who won for the 19th time in 20 games. Trayce Thompson hit...
MLB・14 DAYS AGO
CBS Boston

By Michael Hurley, CBS Boston BOSTON (CBS) — Alex Cora was certainly guilty of participating in a sign-stealing scheme executed by the 2017 Houston Astros en route to their World Series championship. Then the bench coach of the Astros, Cora has admitted as much numerous times since MLB handed out punishment last April. Yet, the punishment was certainly distributed disproportionately. Despite MLB determining the operation was “player-driven and player-executed,” there were no players punished. Only Cora, then-manager A.J. Hinch, and then-GM Jeff Luhnow, were suspended after the investigation. The only player to suffer any consequences was Carlos Beltran, who had been named the...
MLB・1 DAY AGO
MLB Game Highlights

Jazz Chisholm Jr. rockets a three-run home run to right field to give the Marlins a 3-0 lead in the bottom of the 3rd inning.
14 DAYS AGO