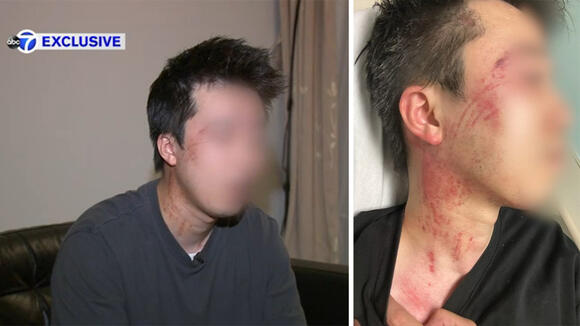 A man is speaking out after a road rage incident on the Cross Bronx Expressway left him battered and fearing for his life. It was a violent explosion of rage captured on dash cam video. The terrifying moment was round two of the assault. The victim can be heard desperately pleading for help with 911, afraid he'd be left for dead on the side of a dark, rainy Cross Bronx Expressway. "He yelled (expletive) Chinese. I'm going to kill you, two or three times," the victim said. In this Eyewitness News exclusive interview, the 28-year-old victim says he rear-ended a black Honda Fit Monday night in the Bronx. It pulled over. But so did a Mercedes minivan, which did not have a license plate. ALSO READ | Missing Long Island native's boyfriend a person of interest & hindering investigation, police say

Gabby Petito's Instagram account is back after it was mysteriously deleted, while police in Utah are confirming an "incident" between her and boyfriend Brian Laundrie.

Out of those two vehicles, he says about 10 people got out, surrounded his car, then watched as the suspect beat him like it was a sport. His eye, his ear, his neck, chest and hip were bruised and sore and he was hospitalized for two days. The assailant punched his driver side window and peeled the window back, punched his face through it and tried to yank him out. Then he broke in through the passenger side. The victim was cornered like a wounded animal for the entire seven minutes he was on the phone with 911. He was punched and kicked relentlessly. The victim says he can't get out of his head, the thick sole boots smashing into his face. "If there's no hate, why do you treat me like this?" he said. "I'm not first generation of immigrants. I'm not first generation. I'm like second or third. I'm young, but I still get treated like this." Police have not categorized this as a hate crime, but the victim thinks it was. He's not alone. ALSO READ | Search for man who kicked woman down subway escalator

Police released video of a violent attack at a Brooklyn subway station.

"That's a pretty vicious hate crime. He wasn't seen as American enough that night," Congresswoman Grace Meng said. "This guy did use racial slurs while beating up the victim, so I really hope they take this seriously." The victim says police officers randomly happened on the scene as the suspect was on his hood kicking in his windshield. If they hadn't passed by, he thinks he'd be dead. The suspect drove off. Police have made no arrests. ---------- * More Bronx news * Send us a news tip * Download the abc7NY app for breaking news alerts * Follow us on YouTube

wait... police came on scene and the perp still got away??? if this isn't a hate crime, idk what is...

Typical behavior of a thirteen percenter. Black males are dangerous animals. Avoid if at all possible.

A teenager was shot and killed after gunfire rang out near a busy intersection in Manhattan Friday night.
MANHATTAN, NY・19 HOURS AGO
ABCNY

Police said officers found a 51-year-old man with a slash wound to his face and a stab wound to the abdomen around 1:05 a.m. on Hester Street on the Lowest East Side near Sara D. Roosevelt Park.
MANHATTAN, NY・11 HOURS AGO
ABCNY

An elderly woman was attacked and robbed of her purse while sitting inside a movie theater in Manhattan nearly two weeks ago.
MANHATTAN, NY・7 HOURS AGO
ABCNY

The 16-year-old girl who survived being shot in the head in a Brooklyn park was miraculously released from the hospital Friday morning, just two weeks after her brush with death.
BROOKLYN, NY・1 DAY AGO

The woman can be seen dressed all in black and carrying a red gasoline can at the Yeshiva of Flatbush.
BROOKLYN, NY・1 DAY AGO
ABCNY

Police say the group walked up to a 21-year-old man, kicked him, punched him, and slashed him in the face.
BRONX, NY・2 DAYS AGO

A man who spent two decades behind bars for an armed robbery in Queens that he didn't commit, is out of prison and speaking exclusively to Eyewitness News.
QUEENS, NY・16 HOURS AGO

A man was robbed at gunpoint in Brooklyn for a large amount of jewelry in the trunk of his car.
BROOKLYN, NY・1 DAY AGO
ABCNY

A large reward is being offered for information leading to an arrest after a cat was found shot on Long Island on Monday.
SUFFOLK COUNTY, NY・14 HOURS AGO
ABCNY

The attacker is caught on camera pulling out a knife and stabbing 37-year-old Sosa three times in the head, back, and arms.
PUBLIC SAFETY・3 DAYS AGO
ABCNY

CAN YOU HELP? For the last two decades, the 73-year-old from Queens kept the monkey in his car and never once took it in his home out of respect.
QUEENS, NY・3 DAYS AGO