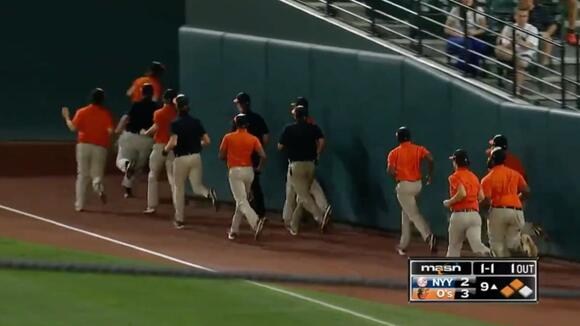 They say you see something new everyday at a baseball game. On Wednesday night at Camden Yards, that cliché might have rung true.

Baseball is a game that has never been short on clichés. An old favorite states that you see something new every day at a baseball game. That might not always hold true, but it certainly was accurate at Wednesday night's game between the Yankees and Orioles at Camden Yards, where the universe pitted the weather, umpires and grounds crew on a collision course that resulted in an umpire ejecting the entire crew from the field.

It's unclear exactly what the grounds crew did to deserve the heave-ho—were they saying something to the players or umpire? Was their standing in foul territory a potential obstruction to the game? Did Tim Timmons have some kind of vendetta against them? The world may never know.

What happened next was very much in keeping with the Orioles' season. At the time of the ejection, Baltimore held a 3–2 lead with one out and two runners on in the ninth inning. Five pitches later, Brett Gardner served up a two-run single that gave the Yankees a 4–3 lead. The Orioles went down in order against Aroldis Chapman in the bottom of the ninth to secure their league-leading 99th loss of the season.

While Baltimore blew the lead and the grounds crew was shown the door, they might have ended up getting the last laugh as the rain began to pick up during Gardner's at bat. Finally after the ballgame had ended, the ever-dutiful grounds crew returned to the field, for they had a job to do.

Umpires this year are real power hungry. Old guys need to calm down, take a Centrum, a shot of Ovaltine and take a nap.

Totally false story. I saw the incident live. Nobody was ejected, no more than the lying media trying to cause trouble yet again.

All those words and no explanation of why. What a waste of my time.

If the Boston Red Sox are going to take down the New York Yankees in the American League Wild Card Game tonight, they’ll need to do it without star slugger J.D. Martinez. Martinez was not included on Boston’s roster for the AL Wild Card Game due to a sprained left ankle. He suffered the injury in the fifth inning of Boston’s regular-season finale on Sunday.
MLB・18 DAYS AGO
NJ.com

Carlos Correa is going to get paid. It’s just a matter of how much the two-time All-Star will be offered. Correa headlines a bumper crop of free-agent shortstops, which also includes the Los Angeles Dodgers’ Corey Seager, Colorado Rockies’ Trevor Story and New York Mets’ Javier Baez. So what will...
MLB・9 DAYS AGO
FanSided

Some more insight regarding the New York Yankees‘ upcoming offseason couldn’t hurt, right? Everyone will soon be sick of hearing update after update only to ultimately watch the team make pedestrian moves, but the more pressure the fanbase applies, the more likely we are to see momentous changes made by the front office. Maybe!
MLB・14 HOURS AGO
CBS Boston

BOSTON (CBS) — The Red Sox will play the Houston Astros in a must-win Game 6 in the ALCS on Friday night. Boston has lost two straight games in the series, and now must win two straight on the road if they want the season to continue. The odds are not great for Boston, but the Red Sox have a history of pulling out Game 6 wins in the ALCS. A really good history. The Red Sox are 6-0 overall in previous ALCS Game 6 matchups. Of course, past success means absolutely nothing for the 2021 Boston Red Sox. But for a...
MLB・1 DAY AGO

The Los Angeles Dodgers were in a load of trouble long before star third baseman Justin Turner collapsed in a heap, but the optics of his late-game injury certainly didn’t help matters in NLCS Game 4. After all, it’s difficult to muster up one more rallying cry when your de...
MLB・1 DAY AGO
New York Post

Boston Red Sox fans let Kyle Schwarber have it for letting a pop-up land on the infield, and he probably had it coming. If you let Schwarber play first base long enough, something like this was bound to happen. The Sox knew this when they acquired him from the Washington Nationals, and they sure as hell didn’t trade for him because of his defensive ability.
MLB・29 DAYS AGO

The opportunity was there. The Los Angeles Dodgers found a window despite swimming upstream throughout Game 6 of the NLCS. In the top of the seventh inning trailing 4-1, LA’s offense came to life. The first three batters reached base, they scored a run, and there were runners on second and third for Albert Pujols.
MLB・4 HOURS AGO
Sportsnaut

The Braves are doing anything but sticking to sports with their Game 6 National Anthem singer. Travis Tritt has made his COVID-19 vaccine stance very clear. Tritt is against COVID-19 vaccine mandates, so much so that he’s canceled dates on his own music tour for it. As a lifelong Braves fan and native of nearby Marietta, Georgia, Tritt was an easy choice for national anthem signer based on pure musical talent alone.
MLB・14 HOURS AGO
USA TODAY

Three of our six experts think the NL Central champions will go on to win the World Series.
MLB・16 DAYS AGO
FanSided

Jose Altuve had an epic slide into home plate for the Houston Astros in Game 1 of the ALDS. The Houston Astros and the Chicago White Sox are battling in Game 1 of the ALDS at Minute Maid Park, except right now it’s not much of a battle. The game is unraveling quickly for the White Sox, while everything is going right for the Astros. Houston’s second baseman Jose Altuve had an incredible slide into home plate that resulted in him completely avoiding Chicago’s catcher Yasmani Grandal.
MLB・16 DAYS AGO
Sporting News

The day Chuck Hughes died: Remembering the only NFL player to die in a game

The pass, on third and 1, sails incomplete as the clock ticks down in the fourth quarter. He had lined up on the right side of the formation as the Lions, trailing 28-23, try to mount a comeback against the rival Bears. He races downfield on a post pattern, but Greg Landry’s pass, intended for tight end Charlie Sanders, sails incomplete.
NFL・2 DAYS AGO
Larry Brown Sports

Carlos Correa had a message for Ryan Tepera after Correa’s Houston Astros knocked Tepera’s Chicago White Sox out of the playoffs on Tuesday. Correa’s Astros won Game 4 of their ALDS with the White Sox 10-1 in Chicago on Tuesday to clinch the series. The Astros had 10 runs on 14 hits in the game. Correa went 2-for-4 with two RBIs.
MLB・11 DAYS AGO
FanSided

Why was Cardinals manager Mike Shildt fired? Team president John Mozeliak offered up an explanation that won’t make fans feel any better. The St. Louis Cardinals unceremoniously fired manager Mike Shildt on Friday. This after a historic 17-game winning streak turned the team’s season around so significantly that it clinched a spot in the postseason.
MLB・9 DAYS AGO
The Spun

Game 5 of the National League Division Series between the Los Angeles Dodgers and San Francisco Giants came to an abrupt close last night. Not with a walk-off home run or an impressive defensive effort — but with a blown call by the first-base umpire. With two outs and an...
MLB・8 DAYS AGO
USA TODAY

A 5-month-old became an instant sensation after an appearance on the Fenway Park videoboard, inspiring several creative chants from the crowd.
MLB・3 DAYS AGO