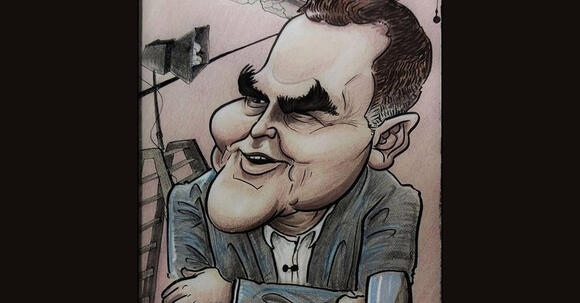 One of the great highlights of Norm Macdonald’s storied career came at the expense of longtime Las Vegas Strip performer Carrot Top . But hours after the comedian’s sudden death sent shockwaves of grief throughout the entertainment community, Carrot Top showed that he’s all class.

Let’s rewind for the uninitiated. In the late 90s, long before his headlining gig at Luxor Las Vegas, the prop comic, having achieved minor fame working comedy clubs and making television appearances, was poised for a breakout with his first leading role in the feature film Chairman of the Board . His co-stars included comedy greats Larry Miller, Fred Stoller, and Taylor Negron, and his leading lady was Melrose Place star Courtney Thorne-Smith .

The film was a box office flop, but it still talked about to this day because of Thorne-Smith’s appearance on a 1997 episode of Late Night with Conan O’Brien. Macdonald, who at the time was widely known as Saturday Night Live’s “Weekend Update” anchor, was also a guest on the show that night, and sat next to Thorne-Smith during her segment.

O’Brien, who was struggling to rein in the comedian, tried to focus on Thorne-Smith, asking the actress about her role as Carrot Top’s on-screen romantic partner.

“Lots of making out, nothing but making out,” Thorne-Smith said. “It’s like 9 ½ Weeks but with Carrot Top.”

He then followed it up with a perfectly-executed Norm Macdonald coda; “Like he’s a premature ejaculator.”

O’Brien and sidekick Andy Richter cracked up, but that was just the door opening for Macdonald. When the host asked Thorne-Smith what her Carrot Top film was called, the comedian jumped in.

“If it’s got Carrot Top you know what a good name for it would be? Box office poison!” he said.

As the actress recoiled, O’Brien playfully chastised the comedian, but gave him yet another opening when Thorne-Smith revealed the title of the film was Chairman of the Board.

“Do something with that, you freak,” O’Brien teased.

Macdonald didn’t even flinch: “I’ll bet the ‘Board’ is spelled b-o-r-e-d.”

O’Brien lost it. Richter lost it. The audience lost it. Thorne-Smith lost it. Macdonald had won the night. That’s why the clip exists online under the title “Norm Saves the Interview.”

Upon Macdonald’s death from cancer Tuesday, the clip began circulating around social media once again, and Carrot Top took the opportunity to call out the late comedian from the stage during his show at Luxor.

“Norm was a very funny dude and a unique kind of talent,” Carrot Top told his audience. “I wouldn’t say we were best of friends, but I think we were friends and I met him many times.

“This thing he did on Conan O’Brien is just f***ing great.”

The comic then rolled a clip of Macdonald’s Late Night appearance. As the Luxor audience roared at “b-o-r-e-d” Carrot Top raised a drink; “So, cheers to Norm Macdonald.”

And what else is there to say? Cheers Norm, thanks for the memories.

The post Carrot Top Honors Norm Macdonald with ‘Conan’ Clip appeared first on Off The Strip .

I had just finished an interview with Christopher Saam, a local comedian and recent contestant on a nationally televised game show, when I saw a text from my wife. She texted to tell me that my favorite comedian Norm Macdonald had just died from cancer at age 61. During our interview, Saam mentioned that he thought a good comedian not only made you laugh but made you think. That’s probably why Macdonald was my favorite comedian.
CELEBRITIES・13 DAYS AGO
Finger Lakes Times

When Norm Macdonald Returned to Host ‘SNL,’ Then Skewered It

For those outside the loop of comedy news, Norm Macdonald probably seemed like an unspectacular choice to host Saturday Night Live: He was far from an A-level celebrity, and his latest projects (the box office flop Dirty Work, his soon-to-be-short-lived series The Norm Show) didn’t exactly light the world on fire.
CELEBRITIES・13 HOURS AGO
Finger Lakes Times

After giving birth to twin boys, Sona is back in the podcast studio and Conan is finally back to slapping snacks out of her hands. Subscribe to watch more Team Coco videos https://www.youtube.com/channel/UCi7GJNg51C3jgmYTUwqoUXA?sub_confirmation=1. Listen to the Full Podcast https://link.chtbl.com/conan. FOLLOW TEAM COCO PODCASTS ON SOCIAL. Conan O’Brien on Twitter https://twitter.com/conanobrien/
TV & VIDEOS・2 DAYS AGO

Meg Ryan hasn't been on a red carpet for nearly two years, but it doesn't mean she forgot how to work one. The When Harry Met Sally... actress, 59, lit up the red carpet at Saturday's Academy Museum of Motion Pictures long-awaited opening gala in Los Angeles. She wore a long black and pink gown by Ulyana Sergeenko for the step-and-repeat in front of photographers. She also wore black, open-toe platform heels and styled her signature sun-kissed, wavy blond locks down.
LOS ANGELES, CA・26 DAYS AGO
nickiswift.com

Who Was The Most Expensive Guest Star On NCIS?

Special Agent Leroy Jethro Gibbs, played by Mark Harmon, and the rest of the "NCIS" team have been solving crimes for nearly 20 years on the CBS drama. Per The Hollywood Reporter, it's the "No. 1 global TV series in the world" and is "licensed in more than 200 countries and territories." The original series is so popular that it has led to several spin-offs, including "NCIS: New Orleans," "NCIS: Los Angeles," and the most recent spinoff, "NCIS: Hawaii."
TV SERIES・14 DAYS AGO
vermilioncountyfirst.com

Ben Affleck and George Clooney are two of Hollywood’s biggest stars, but they’ve yet to co-star in a film. Clooney has directed Affleck in a few movies, most recently The Tender Bar, and they both recently discussed the experience. “We had great experience working together previously, he produced Argo with...
CELEBRITIES・19 DAYS AGO
whio.com

Photos: Peter Scolari through the years

Al Roker's wife Deborah Roberts has sent her support to Celine Dion after she revealed health issues have forced her to postpone her upcoming Las Vegas residency. The ABC News star took to Instagram shortly after Celine broke the devastating news to her fans, sharing a throwback photo of the pair together alongside a sweet message in which she wished the singer a "swift recovery".
CELEBRITIES・2 DAYS AGO
Best Life

If your parents are Danny DeVito and Rhea Perlman, we can only imagine it's hard to break away from the bright lights of Hollywood. And seemingly, the former couple's three children have all been lured. At one point or another, all of the DeVito-Perlman kids have dabbled in acting, but it was recently announced that their oldest child, 38-year-old Lucy DeVito, will be starring alongside her father on a new series. To see Lucy now and find out what she's working on with her dad, read on.
TV & VIDEOS・26 DAYS AGO
kiss951.com

Kelly Clarkson caused a stir when she posted a picture of herself via Instagram on the set of The Voice in a short black dress with a big silver zipper. Fans immediately started to comment on her look. Most fans said she looked “beautiful” and called her “gorgeous,” but one...
CELEBRITIES・2 DAYS AGO
NME

Granville Adams, who appeared in acclaimed HBO prison drama Oz, has died of cancer. The actor played inmate Zahir Arif in the show from 1997. He appeared in a recurring role in Homicide: Life On The Street, which co-starred Brooklyn Nine-Nine‘s Andre Braugher. The actor’s family announced the news of...
CELEBRITIES・12 DAYS AGO

Dave Chappelle's newest special is coming to Netflix on October 5th, 2021, and we are HERE FOR IT. This special is titled The Closer and is the sixth comedy hour the award winning comedian will have on Netflix. The special is sure to be a knockout as the trailer, seen below, already has us cracking up.
TV & VIDEOS・19 DAYS AGO
Fox News

Ricky Gervais believes youngsters will start getting called out for not being "woke" enough just as many others have been in recent years. The comedian was joined by neuroscientist Sam Harris on his "Absolutely Mental" podcast, and during their conversation, the pair peeled back the layers on current ideologies that could or won’t survive the next wave of generational social constructs.
CELEBRITIES・3 DAYS AGO
wmleader.com

Blake Lively is a famous actress, someone who’s chosen to live her life in public, but her kids have not. And the Gossip Girl actress makes a point to maintain the privacy of her three children, who she shares with Deadpool star Ryan Reynolds. Lively reiterated that stance when she...
CELEBRITIES・2 DAYS AGO
TVOvermind

During the late 1990s and early 2000s, Seann William Scott made a huge name for himself as one of the stars of the American Pie film franchise. His character, Steve Stifler, is arguably one of the most memorable of the era and he has carved out a special place in pop culture history. Throughout the mid-2000s, Seann continued to appear in some pretty popular comedies, but by the time the 2010s rolled around he had started to fade from the spotlight. In the years since he played Stifler, lots of people have wondered what Seann is up to. The good news is that he’s still around and you’ll probably be seeing him much sooner than you think. Keep reading to find out what happened to Seann William Scott.
CELEBRITIES・1 DAY AGO