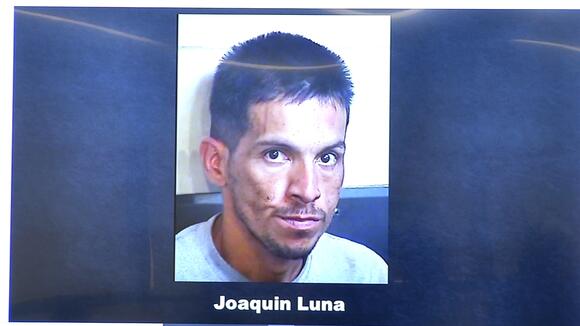 New details have emerged in an officer-involved shooting in Reedley earlier this week. The Fresno County Sheriff's Office, which is investigating the shooting, says Reedley Police officers shot an armed, but innocent homeowner. On Monday, Reedley Police responded to a burglary at a shopping center near Manning Avenue and 11th Street early Monday morning. When officers arrived, they saw 38-year-old Joaquin Luna come down from the roof and take off running toward Manning Avenue. Deputies, officers, and K-9 officers searched alleyways and backyards. Eventually, deputies say that at one point, Luna broke into a house. The man inside the home was asleep at the time and woke up from the noise. The man grabbed his gun and began searching around his home, but deputies say Luna had already quickly left the home. The officers looking for Luna came and saw the homeowner, who still had his gun in his hand, and one opened fire, hitting the man in the leg. Luna was arrested on charges of burglary, vandalism, and resisting arrest. He was also wanted on a warrant for burglary. The homeowner was taken to the hospital with injuries that the Sheriff's Office describes as non-life-threatening. No officers were hurt.

Tulare Walmart given all-clear after evacuation due to 'suspicious call'

A Walmart location in the South Valley has been given the all clear after being forced to evacuate due to a "suspicious call."
TULARE, CA・22 HOURS AGO
ABC30 Central Valley

Julio Garay was found guilty Tuesday of first-degree murder, lying in wait, assault with a semiautomatic weapon and three counts of child abuse in connection with the death of Calley Jean Garay of Chowchilla.
PUBLIC SAFETY・2 HOURS AGO
ABC30 Central Valley

2 accused of kidnapping, shooting at suspect's ex-girlfriend in Merced County

The woman was able to escape from the couple, but as she ran away, they chased her. At one point, someone started firing shots at her.
MERCED COUNTY, CA・3 DAYS AGO
ABC30 Central Valley

The California Highway Patrol is investigating a deadly crash involving a motorcycle in central Fresno.
FRESNO, CA・14 HOURS AGO

A manhunt is underway after Merced police made a major weapons bust on Saturday afternoon.
MERCED, CA・2 DAYS AGO
ABC30 Central Valley

Witnesses told police the motorcyclist was speeding westbound on Shaw Avenue, ran a red light on Cedar Avenue, and hit the back of a trailer being pulled by a van traveling northbound on Cedar turning west onto Shaw.
FRESNO, CA・1 DAY AGO
ABC30 Central Valley

An argument at a southwest Fresno recycling center becomes deadly. Police are looking for the suspects who assaulted a 65-year-old man who later died.
FRESNO, CA・3 DAYS AGO

New details have been released about the armed man who showed up at a school campus in downtown Fresno on Friday.
FRESNO, CA・3 DAYS AGO
ABC30 Central Valley

A late-night fire tore through an under-construction apartment building in Visalia, turning the structure into ash and debris.
VISALIA, CA・1 DAY AGO
ABC30 Central Valley

After receiving several tips, investigators ask for the public's help to identify the owner or anyone associated with two vehicles.
VISALIA, CA・4 DAYS AGO
ABC30 Central Valley

Bicyclist killed after being hit by truck in Merced County

Parts of Highway 140 are closed in Merced County after a truck hit and killed a bicylist on Sunday morning.
MERCED COUNTY, CA・1 DAY AGO

City officials say they want drivers to know that this behavior and their vehicles are being caught on cellphone and surveillance cameras.
FRESNO, CA・14 HOURS AGO
ABC30 Central Valley

Police are searching for a gunman who shot a Stockton man seven times in a suspected hate crime.
CALIFORNIA STATE・4 DAYS AGO
ABC30 Central Valley

A driver was killed in a two-vehicle crash in Merced County on Saturday night.
MERCED COUNTY, CA・2 DAYS AGO
ABC30 Central Valley

Correctional Officer Malama Scanlan passed away this past Tuesday, five years after he was injured in a shooting at the Fresno County Jail.
FRESNO COUNTY, CA・1 DAY AGO
ABC30 Central Valley

Fresno police believe a domestic dispute escalated to a shooting in the area of N Glenn Ave and Belmont Ave that left one person in the hospital on Thursday morning.
FRESNO, CA・4 DAYS AGO
ABC30 Central Valley

Homar Cardenas found Bitwise Industries by accident not long after he got out of prison in 2019, determined to be a better man.
FRESNO, CA・5 DAYS AGO