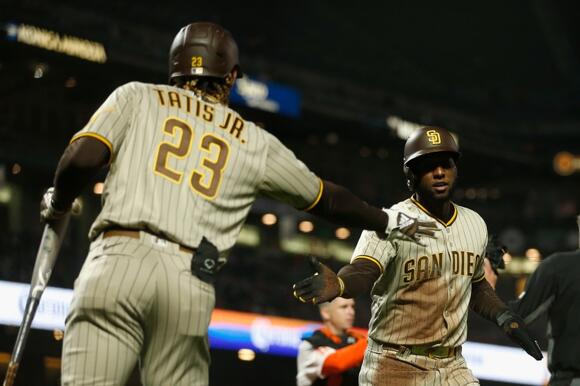 Giants manager Gabe Kapler is going to try to run it back in Wednesday’s 6:45 p.m. start at Oracle Park.

The 29-year-old right-hander will start a second time in the series against a lineup that will look quite a bit different up top.

For starters, Jurickson Profar is leading off for just the sixth time this season and the first time since June 5.

Profar, who will start in right field, was 1-for-3 with a double and a run scored Tuesday. It was his first hit since Sept. 4, a stretch in which he was 0-for-11 with two walks and two strikeouts.

“Just trying to find a spark, get on base and see if we can get something going,” Padres manager Jayce Tingler said.

Fernando Tatis Jr. remains in the two-hole as he was Monday, but Manny Machado will bat third instead of Adam Frazier , who is dropping down to sixth.

With Profar in right field, the Padres will give Wednesday’s start in left field to Tommy Pham , who is 4-for-36 with two extra-base hits over his last 16 games (eight starts).

Trent Grisham remains in center field but is batting eighth.

Grisham is 2-for-29 with no walks and 12 strikeouts in his last seven games, all as the leadoff hitter.

The Padres are hoping to avoid extending their season-worst five-game losing streak. One more defeat would push this skid to their longest since losing six straight on three separate occasions in 2019 (including at the end of that 70-92 season).

Given the current state of the rotation — both Blake Snell and Chris Paddack are hurt and Yu Darvish has been slumping since mid-June — right-hander Joe Musgrove (10-9, 2.93 ERA) is their best bet to snap out of this cold stretch.

At least on the mound, anyway.

But Musgrove has allowed nine earned runs in 10 innings in his two starts this year against the Giants, both losses.

Here is how he’s fared in his career against the Giants:

Here is how the Giants will lineup behind Leone, who is 3-3 with a 1.41 ERA over 44 2/3 innings and will be making his fourth start this year:

Switch-hitting catchers are special. Ones that can actually swing the bat and perform are rare. At the age of 21, Valenzuela is showing a plus bat and the ability to stick behind the plate. The Padres have plenty of young catchers gaining momentum in the minor leagues, and Valenzuela could be the most exciting. The 6-foot-0, 170 lb catcher put up a .299/.393/.429 batting line and a .821 OPS in 97 games last year in the minors. He started in Lake Elsinore and was promoted to Fort Wayne late in the year.
MLB・6 DAYS AGO
RealGM

The San Diego Padres looked into trading for Anthony Rizzo at this year's deadline, according to a report. It isn't known how far negotiations between the Padres and Chicago Cubs got before Rizzo was dealt to the New York Yankees. Rizzo will be a free agent shortly after the conclusion...
MLB・6 DAYS AGO
Sportsnaut

The biggest winner of the 2021 major league season is … the 2017 Houston Astros. Settle down. I have not come to exonerate or forgive the sign stealers. I would not argue with anyone who feels the players got off easy by not facing suspension, and the bans on, say, Alex Cora and A.J. Hinch should have been longer than one year considering their one-year expulsions came in the one year the major league season was 60 regular-season games.
MLB・25 DAYS AGO

Alex Cora has generally made very good managerial decisions with his Boston Red Sox this year. But he made one terrible decision in Game 5 of the ALCS on Wednesday that backfired. The Houston Astros entered the top of the sixth leading 1-0 on a second inning home run by...
MLB・12 HOURS AGO
Audacy

Josh Donaldson has been following his former team rather closely this October and the former Atlanta Braves slugger and current Minnesota Twins third baseman had some thoughts about Tuesday’s Game 3 NLCS against the Los Angeles Dodgers. Donaldson was live-tweeting during the game and began to tear into the Dodgers...
MLB・1 DAY AGO
FanSided

The Chicago White Sox were eliminated from the playoffs on Tuesday after losing Game 4 of their American League Division Series, 10-1, to the Houston Astros. The White Sox, specifically manager Tony La Russa, did not go quietly into the winter, however. Rather, La Russa made it clear that he...
MLB・7 DAYS AGO

If the Boston Red Sox are going to take down the New York Yankees in the American League Wild Card Game tonight, they’ll need to do it without star slugger J.D. Martinez. Martinez was not included on Boston’s roster for the AL Wild Card Game due to a sprained left ankle. He suffered the injury in the fifth inning of Boston’s regular-season finale on Sunday.
MLB・15 DAYS AGO
USA TODAY

"When you are doing (an interview) live something usually always happens," Dusty Baker said explaining his on-air reaction to Kiké Hernandez's homer.
MLB・5 DAYS AGO
FanSided

The Los Angeles Dodgers are fighting the San Francisco Giants for the NL West title and one of their fans is fighting security inside Dodger Stadium. Dodgers fans are dealing with some tough injury news surrounding Clayton Kershaw who had to leave Friday’s start early and his postseason availability is in doubt.
MLB・18 DAYS AGO
The Spun

Max Scherzer started the Wild Card game for the Los Angeles Dodgers tonight. He did not make it through the fifth inning. While Scherzer gave up just one run, Dodgers manager Dave Roberts pulled his ace with one out and two men on in the top of the fifth inning.
MLB・14 DAYS AGO

Chris Sale was called upon for the Boston Red Sox in Game 2 of the ALDS against the Tampa Bay Rays in what was his first postseason start since the 2018 World Series. Sale did not turn back the clock with a vintage performance but rather had an outing that he sure would like to forget.
MLB・11 DAYS AGO
NJ.com

Brian Cashman has been loyal to Aaron Boone, but what if the current Yankees manager isn’t the former player that the Yankees executive most wants running the show in the dugout?. As the Yankees get set to finalize a power structure for 2022, Boone will likely be back. But things...
MLB・9 DAYS AGO
ClutchPoints

Gerrit Cole only went 2+ innings and the offense for the New York Yankees sputtered on Tuesday night as they were eliminated from the postseason in a 6-2 loss to their rivals, the Boston Red Sox. The year will be chalked up as a disappointing one for the Yankees as...
MLB・14 DAYS AGO
CBS Boston

Will the Chicago Cubs move past the World Series champion core for good this winter? Or is a reunion (or reunions) in the cards? That’s been heavily debated among fans for the past month-and-a-half or so after Jed Hoyer sold off everything not bolted down at the July 30 deadline.
MLB・27 DAYS AGO
USA TODAY

Three of our six experts think the NL Central champions will go on to win the World Series.
MLB・13 DAYS AGO
CBS Sports

Verlander (elbow) is expected to receive a qualifying offer from the Astros this offseason, Chandler Rome of the Houston Chronicle reports. Verlander could potentially have an interesting decision on his hands. If healthy, he'd almost certainly receive more than the qualifying offer, which was worth $18.9 million over one year last year. He'll enter next season as a 39-year-old coming off of Tommy John surgery, so it's much less clear what his value will be on the open market. If he rejects the offer and signs elsewhere, Houston will receive draft-pick compensation.
MLB・13 DAYS AGO
FanSided

Remember during the AL Wild Card Game a few years back between the New York Yankees and Oakland Athletics? A matchup that resulted in a 7-2 victory for the Bombers was overshadowed by the baseball community whining about an innocent A’s fan getting three ounces of beer dumped on his head during a home run celebration.
MLB・12 DAYS AGO