COVID deaths are up 40%. These states are running low on ICU beds and health workers 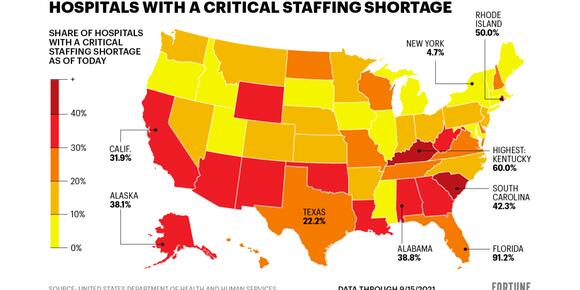 Eighteen months into the pandemic, COVID is again pushing America’s health care infrastructure to a breaking point, with intensive care units at capacity and shortages of health workers being reported widely across the country, according to data from the U.S. Department of Health and Human Services.

In Kentucky, where more than 90% of the state’s ICU beds are occupied, 60% of its hospitals were also experiencing critical staffing shortages as of Wed. Sept 15. The dire situation, paired with a still high number of new cases, led Kentucky governor Andy Beshear and his top health official to warn residents that the state’s hospitals were on the “brink of collapse.” More than 40% of South Carolina’s hospitals are reporting critical staffing shortages, and more than 30% of hospitals in 10 other states—including Arizona, California, and Georgia—are as well.

In terms of ICU capacity, there are six states, including Arkansas, Georgia, and Tennessee with less than 10% of their beds currently available; Alabama is again in the worst shape, with 102.1% of its ICU beds occupied (i.e. more patients than beds). Nineteen other states have more than 80% of their intensive care beds occupied.

The strain on the system is all the more concerning given the high number of hospitalizations and deaths nationwide due to COVID, due to the particularly contagious Delta variant. The U.S. is reporting an average of 1,888 deaths per day due to the virus, up 40% over the figure two weeks ago, according to the New York Times. Since the beginning of the pandemic, the U.S. has lost 664,231 people to COVID, which as Eric Topol, director of the Scripps Research Translational Institute recently pointed out, is at the current rate, just days shy of surpassing the estimated number of Americans (675,000) who died in the 1918 flu pandemic.

While the number of new coronavirus cases reported each day has begun to fall in the hardest-hit states in the U.S. South, including Alabama and Florida (down 47.4% from two weeks ago), they are climbing in more than half U.S. states, led by Maine, where cases are up more than 69% over two weeks ago. The group of states new cases are on the rise include Idaho, Montana, and North Dakota where ICU space is severely limited.

If there’s good news to glean from this week’s picture, it’s that the number of fully vaccinated individuals—those protected from the most severe COVID cases—is increasing, particularly in recently hard-hit Southern states where vaccination rates have lagged. In Mississippi, the number of fully vaccinated individuals is 9.5% higher than two weeks ago. In Arkansas and Alabama, the vaccinated population has grown by 5.6% and 5.3%, respectively, in the same time period.

Oh? Running low on staff and beds ya say??? Could it be a direct result of all the staff that has been fired? You know, the staff and nurses and doctors who were actually attempting to treat their sick patients? Maybe they were about to prescribe some cheap and proven medicine to keep their patients from dying on the ventilator in the ICU???

Biden had a year to sit back and openly criticize Trumps response to covid. Trump immediately shut down borders, provided tents/boats/equipment for those states who requested help, had monthly meetings with every governor, operation warp speed to produce a vaccine, ordered mass production for mask/test, requested states and schools to open,.... Here we are a year later, cases 4x higher, and what is Biden doing? He had so much criticism, a year to come up with his plan...WHAT IS HE DOING???

FAAAAAAAAAKE NEWS! Democrats know Americans are voting for anyone but them in 2022. They can't win a fair election and California just proved it.

New U.S. COVID cases are down 21%. See how your state is doing

Our mission to make business better is fueled by readers like you. To enjoy unlimited access to our journalism, subscribe today. Community transmission of COVID remains high in 89.2% of American counties, according to current data from the Centers for Disease Control and Prevention. Despite that, the latest wave, driven by the highly contagious and completely dominant Delta variant, appears to have crested, with new cases, hospitalizations, and deaths due to the virus all in decline from levels two weeks ago. (It’s estimated that the Delta variant accounts for 99.9% of U.S. cases.)
PUBLIC HEALTH・5 DAYS AGO
Fortune

Subscribe to Fortune Daily to get essential business stories straight to your inbox each morning. Alabama experienced the largest decrease in new COVID-19 cases among the 50 states over the past two weeks, according to a Fortune analysis of New York Times data. The Southern state, which was averaging a...
ALABAMA STATE・4 DAYS AGO
Fortune

The stalemate over patents is fueling vaccine inequity—and the pandemic

This is the web version of The Capsule, a weekly newsletter monitoring advances in healthcare and biopharma. Sign up to get it delivered free to your inbox. This week, vaccine inequity took a turn for the worse. Moderna said that it would not share the recipe for its COVID-19 shot despite pressure to do so to increase the global vaccine supply. The company, which has sold doses almost exclusively to wealthy countries, also said it would open a new vaccine plant in Africa to boost the supply itself, but it didn’t specify when (or where on the continent) that would happen.
CANCER・4 DAYS AGO
EatThis

These 5 States Have "Out of Control" COVID

Cases of COVID-19 have begun to decline nationwide, and some health experts say the surge driven by the Delta variant seems to have peaked. But some states are bucking the national trend and are dealing with large increases in new cases and hospitalizations. Read on to find out more—and to ensure your health and the health of others, don't miss these Sure Signs You May Have Already Had COVID.
PUBLIC HEALTH・20 DAYS AGO

Ever since vaccination rates started slowing over the summer, officials on both a local and national level have been enforcing rules to try to get more people in the U.S. vaccinated against COVID-19. The biggest change came when President Joe Biden announced on Sept. 9 that many businesses would have to require vaccines, or offer a testing option, in order for employees to work in person. Now, these new mandates could have massive consequences for workers in a few states as soon as this coming week. If people working in certain settings don't get vaccinated by the states' deadlines that expire this week, they could face unpaid leave, or worse, the loss of their jobs entirely.
NEW YORK CITY, NY・22 DAYS AGO
Insider

The nurse's brother told CNN that his sister didn't think there had been studies conducted on COVID-19 vaccines.
IDAHO STATE・27 DAYS AGO
EatThis

These 6 States Predicted to Have Next COVID Surge

As summer transitions into fall, the shape of the COVID-19 pandemic is shifting as well. Some hotspots that raged all summer (Florida, Texas and many Southern states) are on the relative decline, while cases are rising in other regions. In these six states, a recent increase in cases and hospitalizations indicate they're part of the next COVID surge. Read on to find out more—and to ensure your health and the health of others, don't miss these Sure Signs You May Have Already Had COVID.
NEW YORK CITY, NY・26 DAYS AGO
Matt Lillywhite

A Disease Is Spiking In The United States, And It's Not Covid

According to the CDC, 476k people are infected with Lyme disease every year. And if left untreated, infection can spread to joints, the heart, and the nervous system. Texas is currently dealing with a giant wave of hospitalizations due to Covid-19. But with the pandemic being in the news so much, many Texans are unaware of other dangerous diseases that have been found throughout the state.
2021-09-04

TAMPA – Gov. Ron DeSantis on Thursday announced the state is purchasing 3,000 doses of a new monoclonal antibody treatment after the Biden administration made the decision last week to limit the number of Regeneron doses received by Florida and other states. DeSantis said the new doses coming to the...
TAMPA, FL・25 DAYS AGO
The Lebanon Reporter

EVANSVILLE – Robb Walter III was just 42 years old when he died, his father says, of COVID-19 pneumonia – unvaccinated. Walter – “Bulldog” to friends and family – left behind a girlfriend, a band he was playing in, a job he loved, and parents who are telling the world on Facebook not to make their son’s mistake.
INDIANA STATE・12 DAYS AGO
Centre Daily

Private employers are increasingly considering whether to require proof of vaccination amid lingering COVID-19 vaccine hesitancy and the rapidly spreading delta variant. But individual state regulations, some of which prohibit employers from doing just that, have added a layer of confusion. Combined with President Joe Biden’s vaccine and testing requirement affecting millions of American workers, some companies are at a loss.
PUBLIC HEALTH・27 DAYS AGO
EatThis

Despite COVID cases going down in most states, now is no time to let your guard down, warns Dr. Anthony Fauci, the chief medical advisor to the President and the director of the National Institute of Allergy and Infectious Diseases. Because in fact, you can catch COVID anywhere—and five states actually have cases going up. Read on to see which states are on the list—and to ensure your health and the health of others, don't miss these Sure Signs You've Already Had COVID.
PUBLIC HEALTH・7 DAYS AGO

Healthcare Workers on Why They Refuse to Get Vaccinated

You probably don’t have to go too far out of your way to see an anti-vaccine protest. Workers and ordinary citizens are up in arms over the Biden administration’s decision to mandate the shot for corporations with more than 100 employees. But you may also see providers wearing full medical...
PUBLIC HEALTH・6 DAYS AGO
Anchorage Daily News

Amanda Frey, a nurse at Fairbanks Memorial Hospital, sat down after a long day at work recently and made a brief video describing what it’s like to die with COVID-19: gasping for breath, terrified and beyond comfort. She paints a grim and immediate picture of deaths occurring almost daily at...
PUBLIC HEALTH・17 DAYS AGO
Power 93.7 WBLK

The U.S. has reported more than 43.6 million confirmed COVID-19 cases as of October 7. There have been more than 700,000 reported deaths from COVID-19-related causes — the highest death toll of any country. The extent of the spread of the novel coronavirus continues to vary considerably from state to state, and from city to […]
OHIO STATE・9 DAYS AGO

The U.S. has reported more than 43.8 million confirmed COVID-19 cases as of October 12. More than 705,000 Americans have died of COVID-19 — the highest death toll of any country. Nationwide, there were an average of 28.8 daily new coronavirus cases per 100,000 Americans in the week ending October 12. Cumulatively, the U.S. has […]
OREGON STATE・4 DAYS AGO
International Business Times

15,790 Fully Vaccinated Americans Either Hospitalized Or Died Of COVID-19

More than 15,000 Americans have been admitted to hospitals or have died of COVID-19 despite being fully vaccinated for the virus, new data showed. At least 12,750 fully vaccinated individuals in the U.S. suffered breakthrough COVID-19 hospitalizations as of Sept. 13. People aged 65 and older accounted for 70% of reported breakthrough hospitalizations.
PUBLIC HEALTH・28 DAYS AGO
news9.com

Oklahoma Doctors Predict The Pandemic Could Eventually Turn Into An Endemic

On Tuesday, Florida Governor Ron DeSantis announced that Dr. Joseph Ladapo will be the state's new surgeon general and secretary of the state's health department. "Joe has had a remarkable academic and medical career," DeSantis said at a news conference. "We feel that Joe is just the right guy for the job."
FLORIDA STATE・25 DAYS AGO