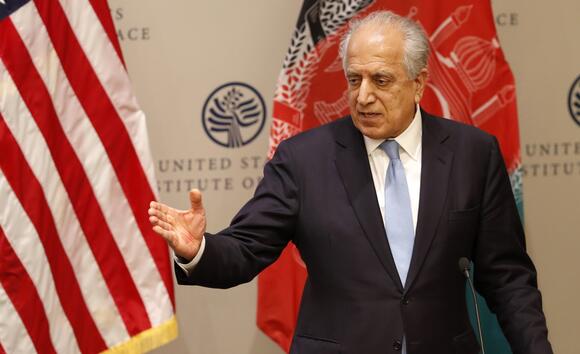 Ousted Afghan President Ashraf Ghani bears responsibility for the Taliban’s swift seizure of Kabul last month, according to a key State Department official who panned the search for “a scapegoat of some kind” in Washington.

“I’m sure I could have done better — people would expect me to say that,” State Department special representative Zalmay Khalilzad told the Financial Times . “But when I reflect I did my very best that I could, given the cards I was dealt with in the circumstances, the fundamentals.”

Khalilzad, a former U.S. ambassador to Afghanistan, was tapped last year by then-Secretary of State Mike Pompeo to broker the peace deal with the Taliban that scheduled the U.S. withdrawal from Afghanistan this year. Secretary of State Antony Blinken retained Khalilzad but has denounced the agreement as a flawed pact that empowered the Taliban and contributed to the conditions necessitating last month’s chaotic evacuation operation at Kabul airport — a crisis that Khalilzad pinned on Ghani’s decision to flee the capital.

That claim, that President Joe Biden’s administration refused an offer to take control of Kabul, led to questions during the State Department press briefing about whether U.S. officials declined an opportunity that would have allowed them to conduct a lengthier, more methodical evacuation operation.

“If there is a perception that the Taliban was hoping that we would deploy our forces or stay longer, that does not reflect, that does not track with reality,” State Department spokesman Ned Price told reporters.

Price declined to say whether such a proposal was discussed between U.S. and Taliban officials, but he dismissed as impractical the idea that American troops could have filled the void left by the collapse of Afghan security forces.

Ghani's departure and the disintegration of forces following the departure did not leave us in a position to defend Kabul,” Price said. “Policing the city of Kabul — that is not something that was ever contemplated as part of that mission, and I do not think anyone here is confident that that would have been viable in any way.”

As it stands, U.S. officials led a major evacuation operation of more than 124,000 people from Afghanistan, while the Taliban controlled the city, “provid[ed] the outer security cordon” around the airport, and received instructions from U.S. officials on “what we expect them to do to protect us,” as Marine Corps Gen. Kenneth McKenzie explained last month. McKenzie, the commander of U.S. Central Command, said that “some attacks [had] been thwarted by” the Taliban, but one suicide bombing carried out by the Islamic State’s affiliate in Afghanistan killed 13 U.S. service members.

Blinken, making a two-day defense before Congress of Biden’s management of the withdrawal, underscored that the Taliban emerged from the peace talks in an enviable position.

“When President Biden took office in January, he inherited an agreement that his predecessor had reached with the Taliban to remove all remaining U.S. forces from Afghanistan by May 1st of this year,” Blinken said. “By January of 2021, the Taliban was in its strongest military position since 9/11 and we had the smallest number of U.S. forces in Afghanistan since 2001.”

Khalilzad, whose tenure as point-man for the peace process has spanned Trump's and Biden’s presidencies, insisted that the Taliban’s victory was Ghani’s fault.

“[T]he fact that they didn’t [negotiate peace] or one side disintegrated, that’s not the responsibility of the United States,” he told the Financial Times . “It’s not my responsibility.”

That call in mid July between the Afghani president and Biden is a BIG piece of the picture. He warned Biden, after we pulled out of Baghram and the Afghani lost ait support from the US, that the Taliban were quickly taking over regions in the north and approaching Kabul….Biden told him to LIE…. Cant blame the Afghani president for running after the writing was on the wall…

Dua they all cut and run . Trump knew that would happen .Joe depends messed up big time and you think he has your back? he can't play chess let alone run a country

The number of Americans and Special Immigrant Visa applicants still in Afghanistan is higher than previously released information indicated, according to one Defense Department official.
IMMIGRATION・22 HOURS AGO
WashingtonExaminer

An email showing "orders" from the Biden administration to fill up planes to "excess" during the frantic evacuations from Afghanistan this summer raises concerns about a lack of vetting, according to a Republican senator.
U.S. POLITICS・12 HOURS AGO
WashingtonExaminer

'Moments when nations must use force': US and allies mull military options as Iran nuclear talks fade

Secretary of State Antony Blinken and allied officials are contemplating military options to counter Iran’s burgeoning nuclear program as American hopes of renewing the 2015 nuclear accord wither.
MILITARY・13 DAYS AGO
The Independent

The Biden administration on Monday suspended $700 million in financial assistance to Sudan following a coup in the African nation that U.S. officials roundly condemned. The State Department said the full amount of the aid package had been put on “pause” pending a review of the developments in Khartoum that saw the military oust a civilian-led transitional authority and detain many of its members. Spokesman Ned Price called for the immediate release of those arrested, including Prime Minister Abdalla Hamdok, and the restoration of the civilian authority. “The civilian-led transitional government should be immediately restored. It represents the...
U.S. POLITICS・1 DAY AGO

How many Americans are still in Afghanistan? State Department number is 'way off,' GOP lawmaker says

Some lawmakers say the Biden administration is undercounting the number of U.S. citizens seeking to flee Afghanistan.
U.S. POLITICS・5 HOURS AGO
PIX11

Two months after US withdrawal, some 300 Americans still in Afghanistan

Taliban welcome Putin's plan to remove them from terrorists' list

Moscow [Russia], October 25 (ANI): Taliban have welcomed remarks by Russian President Vladimir Putin about the possibility to exclude the group from the terror list. Putin, speaking at a meeting of the International Valdai Club, said the removal of the Taliban movement from the list of terrorist organisations is possible. However, he also emphasised that this must happen at the level of the United Nations.
WORLD・2 DAYS AGO
NBC News

WASHINGTON — Family members of more than two dozen Americans who are being held hostage or detained abroad are calling on President Joe Biden to ramp up efforts to try to bring them home. The criticism of the administration comes as 17 missionaries from the U.S. and Canada are being...
U.S. POLITICS・1 DAY AGO

A whistleblower victim provided new documents to POLITICO and is alleging retaliation for speaking out.
CONGRESS & COURTS・1 DAY AGO
The Independent

In a rare joint appeal, the leaders of Pakistan and China on Tuesday urged the international community to swiftly send humanitarian and economic aid to Afghanistan where people are facing food and medicine shortages in the shadow of winter. A government statement said Pakistani Prime Minister Imran Khan and Chinese President Xi Jinping discussed Afghanistan by phone, saying afterward that people there need international help “to alleviate their suffering, prevent instability" and rebuild after the United States withdrew and the Taliban seized power in August. The latest development came a day after Chinese Foreign Minister Wang Yi met...
ADVOCACY・1 DAY AGO
The Independent

Chinese Foreign Minister Wang Yi will meet with Taliban representatives during a trip this week to the Persian Gulf nation of Qatar an official said Monday. The talks during Wang’s visit, scheduled for Monday and Tuesday, are the latest high-level contact between the sides and will “provide an opportunity to have an in-depth exchange of views on Afghanistan’s situation and issues of joint concern,” Foreign Ministry spokesperson Wang Wenbin said at a daily briefing. Beijing long opposed operations by U.S. and NATO forces in Afghanistan — with which it shares a narrow border — while benefiting from the...
POLITICS・2 DAYS AGO

US Secretary of State Antony Blinken announced Monday that the State Department will establish a new bureau and envoy to handle cyber policy, revamping amid alarm over rising hacking attacks. In a memo to staff, Blinken said that a review showed a need for structural changes on "how the State Department should adapt to 21st-century challenges." He announced plans, subject to approval by Congress, to create a Bureau of Cyberspace and Digital Policy with a new special envoy for critical and emerging technology. "This structure will provide us with greater leadership and accountability to drive the diplomatic agenda within the interagency and abroad," Blinken wrote.
U.S. POLITICS・1 DAY AGO
WREG

WASHINGTON (AP) — The Senate’s willingness to confirm a president’s nominees took a downward turn during Donald Trump’s first year in office. And it has only gotten worse for President Joe Biden. About 36% of Biden’s nominees have been confirmed so far in the evenly divided Senate, a deterioration from the paltry 38% success rate […]
PRESIDENTIAL ELECTION・2 DAYS AGO
albuquerqueexpress.com

Kabul [Afghanistan], October 24 (ANI): The Taliban on Sunday for the first time accepted that collapse of the former government (Islamic Republic of Afghanistan) was not in the interest of the people and that it did not happen in an organized manner. Deputy Minister of Information and Culture Zabiullah Mujahid...
WORLD・2 DAYS AGO
Washington Square News

An Afghan political leader and a former Department of Defense official sat down at an NYU event to discuss the aftermath of the U.S. military withdrawal and the future of Afghanistan on Oct. 18. The virtual event, hosted by the Center for Global Affairs at NYU’s School of Professional Studies,...
WORLD・2 DAYS AGO

The Russian president told a forum in Sochi that the U.S. should still take responsibility for its military withdrawal.
POLITICS・4 DAYS AGO
CBS News

Zalmay Khalilzad sticks by his Taliban deal, says the U.S. should have pressed President Ghani harder

In his first interview since resigning as the U.S.'s chief negotiator with the Taliban, Ambassador Zalmay Khalilzad strongly defended the deal he negotiated to withdraw U.S. troops from America's longest war, but told "Face the Nation" moderator and CBS News chief foreign affairs correspondent Margaret Brennan that he objected to the direction of the Biden administration's current Afghanistan policy.
U.S. POLITICS・3 DAYS AGO
Newsweek

"As a superpower, the United States has a major responsibility and should be held accountable," Fawzia Koofi said.
U.S. POLITICS・4 DAYS AGO
CNN

(CNN) — The Biden administration has told lawmakers that the US is nearing a formalized agreement with Pakistan for use of its airspace to conduct military and intelligence operations in Afghanistan, according to three sources familiar with the details of a classified briefing with members of Congress that took place on Friday morning.
FOREIGN POLICY・4 DAYS AGO