By Trevor Hunnicutt
Reuters
30 days ago 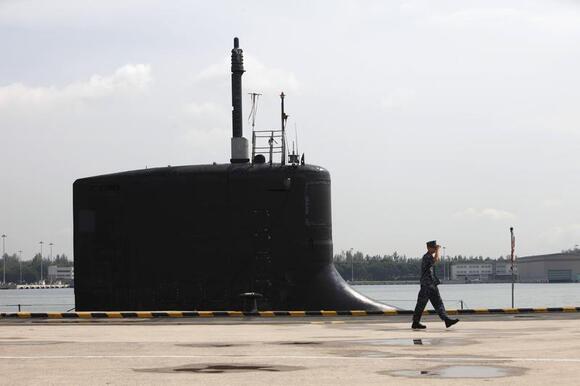 WASHINGTON/CANBERRA (Reuters) -China on Thursday denounced a new Indo-Pacific security alliance between the United States, Britain and Australia, saying such partnerships should not target third countries and warning of an intensified arms race in the region.

Under the arrangement, dubbed AUKUS, the United States and Britain will provide Australia with the technology and capability to deploy nuclear-powered submarines.

The United States and its allies are looking for ways to push back against China’s growing power and influence, particularly its military buildup, pressure on Taiwan and deployments in the contested South China Sea.

U.S. President Joe Biden, British Prime Minister Boris Johnson and Australian Prime Minister Scott Morrison did not mention China by name in the joint announcement and senior Biden administration officials, who briefed reporters ahead of time, said the partnership was not aimed at countering Beijing.

“China always believes that any regional mechanism should conform to the trend of peace and development of the times and help enhance mutual trust and cooperation... It should not target any third party or undermine its interests,” he told a regular briefing in Beijing.

Johnson said the pact was not meant to be adversarial and said it would reduce the costs of Britain’s next generation of nuclear submarines.

“Now that we have created AUKUS we expect to accelerate the development of other advanced defence systems including in cyber, artificial intelligence, quantum computing and undersea capabilities,” Johnson told parliament.

The three leaders stressed Australia would not be fielding nuclear weapons but using nuclear propulsion systems for the vessels to guard against threats.

“We all recognise the imperative of ensuring peace and stability in the Indo-Pacific over the long term,” Biden said.

“We need to be able to address both the current strategic environment in the region, and how it may evolve because the future of each of our nations and indeed the world depends on a free and open Indo-Pacific enduring and flourishing in the decades ahead,” he said.

Morrison said Australia would meet all of its nuclear non-proliferation obligations.

One U.S. official said the partnership was the result of months of engagements by military and political leaders during which Britain - which recently sent an aircraft carrier to Asia - had indicated it wanted to do more in the region.

New Zealand Prime Minister Jacinda Ardern welcomed the focus on the Indo-Pacific but said Australia’s nuclear-powered submarines would not be allowed in its territorial waters.

Singapore said it had long had relations with Australia, Britain and the United States and hoped their grouping would contribute to peace and stability.

Japan said the three countries’ strengthening of security and defence cooperation was important for peace and security.

A U.S. official briefing before the announcement said Biden had not mentioned the plans “in any specific terms” to Chinese leader Xi Jinping in a call last Thursday, but did “underscore our determination to play a strong role in the Indo-Pacific”.

U.S. officials said nuclear propulsion would allow the Australian navy to operate more quietly, for longer periods, and provide deterrence across the Indo-Pacific.

The partnership ends Australia’s 2016 deal with French shipbuilder Naval Group to build it a new submarine fleet worth $40 billion to replace its more than two-decades-old Collins submarines, a spokesperson for Morrison told Reuters.

France accused Biden of stabbing it in the back and acting like his predecessor Donald Trump here.

“This brutal, unilateral and unpredictable decision reminds me a lot of what Mr Trump used to do,” Foreign Minister Jean-Yves Le Drian told franceinfo radio. “I am angry and bitter. This isn’t done between allies.”

Biden said the three governments would launch an 18-month consultation period “to determine every element of this programme, from workforce, to training requirements, to production timelines” and to ensure full compliance with non-proliferation commitments.

Among the U.S. firms that could benefit are General Dynamics Corp and Huntington Ingalls Industries Inc.

General Dynamics’ Electric Boat business does much of the design work for U.S. submarines, but critical subsystems such as electronics and nuclear power plants are made by BWX Technologies Inc

U.S. officials did not give a time frame for when Australia would deploy a nuclear-powered submarine, or how many would be built. They said that since Australia does not have any nuclear infrastructure, it would require a sustained effort over years.

A U.S. official said Washington had shared nuclear propulsion technology only once before - with Britain in 1958.

“This is frankly an exception to our policy in many respects. I do not anticipate that this will be undertaken in other circumstances... We view this as a one-off.”

China whines when it's not in there favor. They been acting like bad actors.Tawain ,Japan,Phillipines and other South Asian countries woke up and t[k notice. China wants to play bad boy in the region. Well China the world his here

The Global Times warned Taiwan that the U.S. won't "fight to the death" over Taiwan, but China is prepared to wage the battle.
FOREIGN POLICY・1 DAY AGO
International Business Times

As war threat looms over the Taiwan strait, Russian President Vladimir Putin has said that China "does not need to use force" to take over Taiwan. Putin's comments come even as China ramps up a display of power over Taiwan by sending warplanes into the latter's buffer zone. The Russian...
POLITICS・2 DAYS AGO
Reuters

BRUSSELS, Oct 15 (Reuters) - European Council President Charles Michel said on Friday after a call with Chinese President Xi Jinping that the European Union and China would hold a summit soon. Two of the world's biggest trading powers, the EU and China have not met in a formal physical...
POLITICS・21 HOURS AGO
Business Insider

Cambodia has said little about what happening at the base, worrying the US, which suspects it may be preparations for a Chinese military presence.
MILITARY・2 DAYS AGO

President Putin on Taiwan: ‘China does not need to use force’

Chinese President Xi Jinping last week vowed to realize his aim of bringing the democratically run island nation of 24 million people under Beijing's control by peaceful means. Taiwan's President Tsai Ing-wen responded in a speech Sunday, announcing that her government would invest in bolstering its military in order to...
POLITICS・2 DAYS AGO
AFP

A bitter transatlantic rift is over, the European Union's top diplomat declared Friday, a month after France was infuriated with the United States over losing a massive submarine contract in Australia. France last month recalled its ambassadors, accusing the United States of deceit and Australia of backstabbing, after Canberra scrapped a multi-billion-dollar contract for French conventional submarines.
MILITARY・15 HOURS AGO
The Conversation U.S.

France’s recent recall of its ambassador to the United States was an exceptional move in the long history of France-U.S. relations, which began with the 1778 treaties that created a military and commercial alliance between the two countries. In France, President Joe Biden’s Sept. 15, 2021 announcement of a new...
MILITARY・1 DAY AGO
Washington Examiner

For the United States and China, the next decade is one of maximum peril. The possibility of a military conflict between the two countries is increasing. The likely flashpoint is Taiwan. Over the past several weeks, China has significantly ratcheted up its military aggression, flying a record number of military...
FOREIGN POLICY・2 DAYS AGO

America's failure to keep our decades-long public commitment to Taiwan would be devastating.
FOREIGN POLICY・1 DAY AGO
The Associated Press

BANGKOK (AP) — After sending a record number of military aircraft to harass Taiwan over China’s National Day holiday, Beijing has toned down the saber rattling but tensions remain high, with the rhetoric and reasoning behind the exercises unchanged. Experts agree a direct conflict is unlikely at the moment, but...
POLITICS・2 DAYS AGO
Reuters

Great power competition with Russia, China is a fallacy

Interestingly, the Obama, Trump and Biden administrations have pursued remarkably similar foreign policies based on a great power competition with Russia and principally China, as what is now, according to the Pentagon, "the pacing threat." President Barack Obama made the decision in 2011 to "pivot" to Asia, subsequently softened to...
FOREIGN POLICY・3 DAYS AGO

The EU envoy charged with coordinating talks on reviving the Iran nuclear deal, Enrique Mora, met Iranian deputy foreign minister Ali Bagheri in Tehran on Thursday, the Iranian ministry said. Bagheri, in charge of the nuclear file for Iran, tweeted that the meeting would include talks about the "removal of cruel sanctions".
POLITICS・2 DAYS AGO
Reuters

WASHINGTON, Oct 11 (Reuters) - Two dozen countries have joined a U.S.- and EU-led effort to slash methane emissions 30% by 2030 from 2020 levels, giving the emerging global partnership momentum ahead of its launch at the U.N. climate summit in Glasgow later this month. Nigeria, Japan and Pakistan are...
INDIA・4 DAYS AGO
theedgemarkets.com

China’s government has been seeking to isolate Taiwan, which it claims as its own territory. It has stepped up military harassment of the island by flying fighter jets toward Taiwan, with a particularly large number of flights last week. Chinese President Xi Jinping this weekend has promised once again to...
POLITICS・5 DAYS AGO

After a report from the Wall Street Journal on Thursday claimed U.S. troops have been training troops in Taiwan for the past year, the editor-in-chief of the Chinese state-run Global Times said those U.S. troops should reveal their location and see whether they will be attacked and “eliminated” with a “targeted air strike” by China’s military.
MILITARY・8 DAYS AGO
Washington Times

New reports that the U.S. has secretly sent teams of special operations soldiers and Marines to Taiwan to train military forces there has added fresh fuel to rising tensions with an increasingly bellicose China. About two dozen troops have been conducting training missions with Taiwan‘s ground forces for at least...
AEROSPACE & DEFENSE・7 DAYS AGO
WTOP

Washington — A U.S. nuclear submarine sustained damage and some crew members were injured when it “struck an object” while operating at depth a week ago in one of the most sensitive bodies of water on the planet, the South China Sea. The U.S. Navy confirmed in a statement on Thursday that the USS Connecticut, a nuclear-powered fast-attack submarine, struck the unidentified object on October 2, “while operating in international waters in the Indo-Pacific region.”
MILITARY・7 DAYS AGO