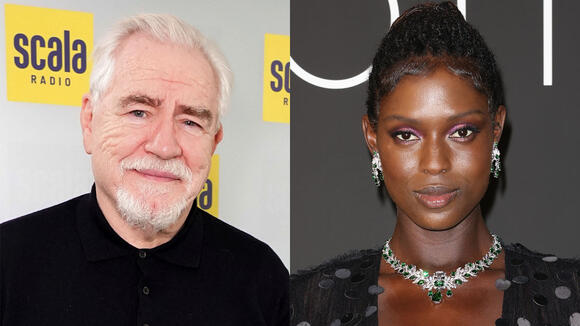 Logan Roy is moving into politics.

Set in the final weeks of the most consequential presidential election in history, The Independent follows an idealistic young journalist (Turner-Smith) who teams up with her idol (Cox) to uncover a conspiracy that places the fate of the election, and the country, in their hands.

Ryan Cunningham of Anonymous Content ( The Revenant , Spotlight , Winter’s Bone ) and Emmy-winning producers Sam Bisbee of Park Pictures ( Truffle Hunters , Hearts Beat Loud , Infinitely Polar Bear ) and Thea Dunlap ( The Sentence , The Hero , Farewell Amor ) are set to produce alongside Caddy Vanasirikul of The Exchange ( The Stand In ) and Parter. Lance Acord and Jackie Kelman Bisbee of Park Pictures and Brian O’Shea and Nat McCormick of The Exchange are serving as executive producers.

The Exchange is financing The Independent and is currently presenting the project to buyers at the 2021 Virtual TIFF.

“Brian is not only a wonderful actor, he has global appeal and paired with Jodie’s strong screen presence and talent, The Independent looks like one of the strongest titles of this market,” said O’Shea, CEO of The Exchange.

Alongside Succession , Cox is known for X2: X-Men United , Troy and Manhunter , while Turner-Smith recently appeared opposite Michael B. Jordan in Amazon’s Without Morse , plus Queen & Slim , Nightflyers and as the titular queen in British TV drama Anne Boleyn.

‘There was always an excuse to take a drink’: Succession’s Alan Ruck on Ferris Bueller, booze and bouncing back

Alan Ruck is talking to me by video about the present, but he appears to be sitting in the past. The present we are discussing is the forthcoming third season of Succession, the wildly adored HBO series about plutocracies and dysfunctional families, created by Jesse Armstrong, a co-creator of Peep Show. Ruck plays Connor, the neglected eldest son of a media magnate, Logan Roy (Brian Cox). Like all the actors on the show – as the Guardian’s unofficial Succession correspondent, I have interviewed Cox and Jeremy Strong – Ruck has thought deeply about his character and is very eloquent on the subject. It is, however, a little hard to focus on what he’s saying because the bright and spacious kitchen in which he’s sitting bears a striking resemblance to another kitchen audiences associate with him. More than 30 years before Ruck played Connor, he was Cameron Frye, another neglected son of a cruel and wealthy man, in the 1986 John Hughes classic film Ferris Bueller’s Day Off. Alan, I say, are you actually sitting in Ferris Bueller’s kitchen?
TV & VIDEOS・5 DAYS AGO
Variety

The Miseducation of Ben Affleck: How ‘The Tender Bar’ and ‘The Last Duel’ Could Turn the Oscar Page (Again)

Ben Affleck is an accomplished actor, producer, writer and director, proven by his two Academy Awards. So why does social media chatter generally refer to each of his new and effective outings worthy of Oscars consideration as a “comeback?” In the middle of his newest film “The Last Duel,” it dawned on me. Nothing regarding his interpretation of Count Pierre d’Alençon should work with his sensibilities as an actor. Yet he completely steals the show in one of three segments designed to belong to Jacques Le Gris (played by Adam Driver). Unfortunately, the Hollywood machine, critics and consumers have taken his abilities for...
MOVIES・5 DAYS AGO
The Hollywood Reporter

On Saturday afternoon, stars gathered at Will Rogers Historic State Park in the Pacific Palisades for the return of the Veuve Clicquot Polo Classic — an elegant affair that has long attracted celebs to its celebration of champagne and polo.  The event opened with a performance of the national anthem by Hamilton star Renée Elise Goldsberry, followed by an afternoon of polo-playing and picnicking.  Attendees — along with their tickets of admission that run anywhere between $110 for the Picnic Lawn to $19,000 for a private spot in the La Grande Dame Cabanas — were required to provide proof of vaccination or...
CELEBRITIES・12 DAYS AGO

UK sales outfit Mister Smith Entertainment has boarded worldwide sales on Rachel Feldman’s Lilly, set to star Patricia Clarkson. Shooting will begin this month in the US state of Georgia on the film which is based on the real-life Lilly Ledbetter, a family woman from a small Alabama town who fought for equal pay for equal work in the American courts. Her activism led to the Lilly Ledbetter Fair Pay Restoration Act of 2009, the first piece of legislation signed by President Obama.
GEORGIA STATE・10 DAYS AGO
seattlepi.com

The film, first reported by Variety back in July, is currently shooting in London and Scotland. The pic is fully financed and co-produced by Stuart Ford’s indie operation AGC Studios. More from Variety. 'Moonfall' Sales Firm AGC Launches Supernatural Thriller 'Consecration' (EXCLUSIVE) The movie is centred on the suspicious death...
MOVIES・10 DAYS AGO
The Hollywood Reporter

Jeremy Davies, Elizabeth Reaser and Luke Kirby have joined the cast of Dark Harvest, a horror-thriller that David Slade is directing for MGM. Casey Likes and E’myri Crutchfield will star in the project, which Matt Tolmach and David Manpearl are producing via Matt Tolmach Productions. The film, an adaptation of Norman Partridge’s 2007 Bram Stoker Award-winning novel of the same name, is set in a small Midwestern town in which every fall a supernatural specter rises from the cornfields and makes its way toward the town’s church. There, gangs of teenage boys hungrily await their chance to confront the legendary nightmare in...
MOVIES・12 DAYS AGO
femalefirst.co.uk

Actor and model Jodie Turner-Smith toasted COS‘s fall collection in LA last night with her husband, Joshua Jackson, by her side. The small soirée showcased COS’s largely gender-neutral fall offerings — think wide-leg trousers, textured shearling, and cashmere sweaters — so we asked Jodie if she ever borrows from Joshua’s closet. “Oh, yeah,” she said, laughing. “Especially T-shirts. You know, he’s a guy — when he gets a hole in his shirt or something, he’ll just keep wearing them. And I’m like, ‘No no no, there’s a hole in it? It’s mine.'”
DESIGNERS & COLLECTIONS・1 DAY AGO
Variety

Oscar Isaac is one of the hottest actors working in Hollywood, showcased by his distinct and invigorating performances in films such as “The Card Counter” from Paul Schrader, “Dune” from Denis Villeneuve and “Scenes from a Marriage,” the limited series that just completed its run on HBO. Knowing firsthand about the hustle of making it in Hollywood, both as a Latino and wanting to “be seen” by his peers, he’s mindful of choosing projects and keeping his family first and foremost. On this edition of the Variety’s Awards Circuit Podcast, Isaac sits down to discuss various topics, including his chemistry with...
MOVIES・2 DAYS AGO
WWD

Tom Clancy’s Jack Ryan doesn’t have a Season 3 premiere date yet, but he’s already planning his next mission: Amazon Prime has renewed the John Krasinski-starring thriller for Season 4, our sister site Variety reports. Additionally, Michael Peña (Narcos: Mexico) has boarded the series in an undisclosed role. In the third season — which recently wrapped production — “Jack is on the run and in a race against time,” per Variety. “He is wrongly implicated in a larger conspiracy and suddenly finds himself a fugitive out in the cold. Now, wanted by both the CIA and an international rogue faction that...
TV & VIDEOS・2 DAYS AGO

Saban Films has acquired U.S., Canadian and Spanish rights to the survival thriller “Borrego” from writer and director Jesse Harris. The film stars Lucy Hale (“Truth or Dare,” “Pretty Little Liars”), Nicholas Gonzalez (“The Good Doctor,” “Narcos”), Olivia Trujillo (“Vivo,” “For All Mankind”) and Leynar Gómez (“Narcos,” “Towards the Battle”). Hale also serves as an executive producer on the film alongside Tucci & Company, Garrett Patten, Frank Harris and Michael Gooch. “Borrego” follows Elly (Hale), a young botanist who relocates to a small desert town to study an invasive plant species, and is kidnapped by an inexperienced drug mule (Gómez) after...
MOVIES・9 DAYS AGO
ETOnline.com

While a Happy Days revival hasn't yet been announced, Ron Howard is always looking toward the future. The filmmaker and former Happy Days star even has an idea for who'd be perfect to take over his role in a possible reboot. Recently, the acclaimed director sat down with his brother,...
MOVIES・3 DAYS AGO
goodhousekeeping.com

ITV has announced a new psychological thriller series, titled The Suspect, from the producers of Line of Duty and Vigil. Aidan Turner, who rose to fame as Ross Poldark in the BBC's Poldark, will play the lead role. He said in an official statement: "I am thrilled to be taking...
TV SERIES・11 DAYS AGO
nickiswift.com

Who Was The Most Expensive Guest Star On NCIS?

Special Agent Leroy Jethro Gibbs, played by Mark Harmon, and the rest of the "NCIS" team have been solving crimes for nearly 20 years on the CBS drama. Per The Hollywood Reporter, it's the "No. 1 global TV series in the world" and is "licensed in more than 200 countries and territories." The original series is so popular that it has led to several spin-offs, including "NCIS: New Orleans," "NCIS: Los Angeles," and the most recent spinoff, "NCIS: Hawaii."
TV SERIES・7 DAYS AGO
Outsider.com

The Conners revealed in 2018 that Roseanne died from an accidental overdose of painkillers. But last night, the popular ABC sitcom gave audiences a look at how the character tried to handle her addiction to opioids. Darlene found a note her mom wrote in the margins of a Bible in...
CELEBRITIES・16 DAYS AGO
thefocus.news

Lili Bernard has made headlines after filing a lawsuit against Bill Cosby accusing him of assault after meeting on The Cosby Show – who was her character Mrs Minifield?. According to court documents obtained by CNN, Lili Bernard has accused Cosby of assaulting her while she was involuntarily intoxicated in or around August 1990 in the Trump Taj Mahal casino resort in Atlantic City, New Jersey.
ATLANTIC CITY, NJ・1 DAY AGO
Hello Magazine

Sarah Jessica Parker has paid a heartfelt tribute to her late friend and colleague following his devastating death. The Sex and the City star said she was "utterly devastated" as she revealed the passing of George Malkemus, the co-founder of SJP Shoes. The actress wrote: "George D.Malkemus lll. February 23rd,...
CELEBRITIES・27 DAYS AGO
Outsider.com

Lucille Ball’s daughter, Lucie Arnaz, is paying her respects to a beloved cast member that once appeared on “The Lucy Show.”. While Ball was known for her hilarious antics on “I Love Lucy” with Desi Arnaz, she had other ventures after the still-loved sitcom. She starred in “The Lucy Show” from 1962 to 1968 alongside other icons like Gale Gordon and Vivian Vance. Amongst those stars was James (Jimmy) Garrett.
CELEBRITIES・27 DAYS AGO