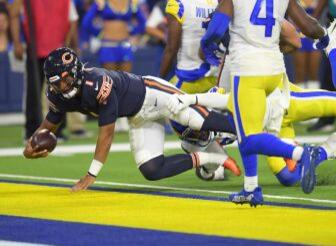 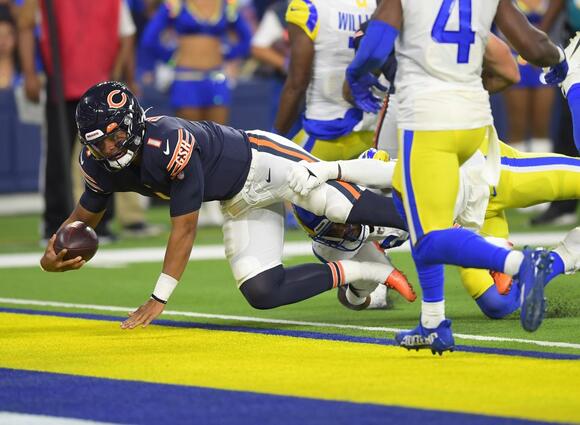 The Chicago Bears appear determined to suffer through a little more mediocre quarterback play by Andy Dalton before handing the reins to rookie first-round pick Justin Fields . That doesn’t mean everyone in the organization agrees with head coach Matt Nagy’s decision.

In fact, the man directly beneath Nagy, with the most authority of the offense the Bears are hoping to eventually build around Fields, made a not-so-subtle suggestion on Wednesday that the former Ohio State star is fully capable of playing full-time right now.

Check out this exchange between offensive coordinator Bill Lazor and a local reporter regarding Fields’ readiness to play , as captured by NBC Sports Chicago’s Adam Hoge, and transcribed below:

“Q: Based on what he did in Week 1, is Justin Fields ready for a full series?

Lazor: I would have said after the preseason that he’s moving quickly and ready for whatever’s thrown at him.

Q: If he’s ready for it, then why isn’t he getting those additional chances?

Lazor: I think Matt [Nagy] has probably addressed what his philosophy is on the quarterback position. I don’t think that’s any different. I don’t think there’s any reason for me to answer that.”

Oh, but sir! Mr. Lazor, you may have been trying to be vague in your responses to that tough line of questioning, but you lived up to your surname with the precision in which your intention cut through.

It’s clear as day to anyone beyond Halas Hall that Fields should be starting, and that paradigm is apparently seeping through to the coaching staff as well. 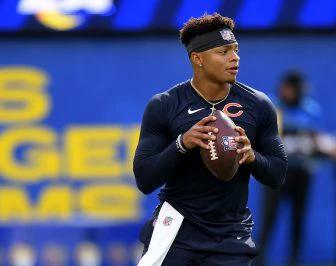 If, legitimately, the closest person to the situation other than the head coach is dropping this gigantic of a hint that, yes, Fields can play, then he can probably play.

The main reason Nagy isn’t pressing Fields into action is because of his stubborn adherence to this belief that he has a similar situation to what he experienced in Kansas City as an assistant coach. Alex Smith was the veteran incumbent starter, and Patrick Mahomes sat behind him for all but one game of his rookie season . Mahomes proceed to win MVP the next year, and all kinds of accolades thereafter.

But again, we Fields stans — and um, us people who think about football in a logical fashion — can say it until we’re blue in the face: Smith led KC to the playoffs for multiple years before Mahomes arrived, was the established leader of the team, and was part of a much better, more stable organization across the board. 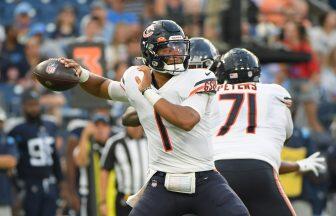 Chicago is a bunch of chaos, dysfunction, instability at the QB position, and Dalton just got there this offseason . He’s never won a playoff game.

Let’s also remember that the Bears were so blindingly lucky to even get the chance to take Fields in the draft.

When Fields was still there at 11th overall, thankfully general manager Ryan Pace had a relationship with New York Giants GM Dave Gettleman to pull off a trade. Otherwise, Chicago would be rolling with Dalton and — Nick Foles maybe?

Nagy admitted defeat last year when his alleged play-calling wizardry wasn’t working. He handed duties over to Bill Lazor. Lo and behold, the Bears found a spark down the stretch and made the playoffs with Mitchell Trubisky under center .

Whether it’s ego, a kinship with Dalton or…look, who knows? The point is, Nagy is in charge of the call sheet again, and Chicago just got blown off the field 34-14 against the Los Angeles Rams in Week 1.

The home opener, facing a vulnerable Cincinnati Bengals defense this Sunday, seems like the ideal setting to trot Fields out there. At this point, it’s not going to happen but for a play at a time, unless Dalton has an abysmal start.

Trubisky is a more athletic QB who opened up Chicago’s rushing attack in 2020, and Lazor capitalized on that skill set. David Montgomery had a strong showing in Week 1, but that’s more due to the Rams daring Dalton to beat them with his arm than stacking the box and focusing on stopping the Bears’ starting tailback.

Bottom line: Fields is like a 3.0 version of Trubisky from a physical tools standpoint. The ceiling of Chicago’s offense would be exponentially higher with Lazor dialing up plays and Fields being the clear-cut starter. Chances are, if Fields got to start, Lazor would call the shots once again, if last year is any indication.

Alas, we all wait until Nagy becomes the last to find out what the no-brainer best decision is.

In an attempt to bolster their anemic offense, the Chicago Bears got Justin Fields and the team’s attack some help by trading for Miami Dolphins wide receiver Jakeem Grant. This, according to Tom Pelissero of The NFL Network. The move comes shortly after the Bears scored a 24-14 win over...
NFL・15 DAYS AGO
Chicago Tribune

Chicago Bears Q&A: Was Matt Nagy trying to send a message to George McCaskey about ‘progress’? Is Justin Fields getting a better feel for NFL speed?

Chicago Bears coach Matt Nagy talked about “progress” after the team’s defeat to the Green Bay Packers in Week 6 — but how much have the Bears made with rookie quarterback Justin Fields? Brad Biggs addresses that and much more in his weekly Bears mailbag. Matt Nagy spoke a lot about “progress” in his Monday news conference. Were his words directed toward George McCaskey? — @mmesq11 That is an ...
NFL・12 HOURS AGO
USA TODAY Sports Media Group

Chris Simms admits he was wrong about Justin Fields

Before the start of the season, NFL analyst Chris Simms was criticized for his evaluation of Bears rookie quarterback Justin Fields, ranking him the 39th quarterback in the NFL. Fields ranked far below other quarterbacks taken in the 2021 NFL draft, including Trevor Lawrence (28th), Zach Wilson (27th) and Mac...
NFL・8 HOURS AGO
wcluradio.com

Chicago Bears head coach Matt Nagy said Wednesday that rookie quarterback Justin Fields will be the team’s starter moving forward. Fields, the No. 11 pick last year’s NFL draft, opened the season as the team’s backup but had started each of Chicago’s past two games with Andy Dalton out with an injury.
NFL・13 DAYS AGO

It took Bears head coach Matt Nagy way longer than it should have to reach the decision, but at least it did happen. Rookie Justin Fields will be the Bears starting quarterback even with veteran Andy Dalton back from injury. Though the news shouldn’t have been a surprise, Nagy’s consistent...
NFL・14 DAYS AGO
670 The Score

LAKE FOREST, Ill. (670 The Score) -- Upon learning the news Tuesday night that their son had been named the Bears’ starting quarterback, the parents of rookie Justin Fields were ready to go out and celebrate. The 22-year-old Fields wasn't interested. He instead chose to stay behind at home and...
NFL・14 DAYS AGO
USA TODAY Sports Media Group

Maybe it was the constant public shaming, or the actual film, or pressure from upper management. Whatever the reason, Chicago Bears fans can finally rejoice, as head coach Matt Nagy named rookie Justin Fields the team’s starting quarterback moving forward. Nagy seemed content to die on the hill of “Andy...
NFL・14 DAYS AGO
saturdaytradition.com

Justin Fields is officially a starting quarterback in the NFL. Bears coach Matt Nagy officially named Fields as his starter during a press conference on Wednesday afternoon. Fields has started the last two weeks due to Andy Dalton suffering an injury, but now the move is permanent. “It’s Justin’s time,”...
NFL・14 DAYS AGO

Justin Fields has many valuable traits, but if the Bears made a list of the qualities that compelled them to trade up and draft him No. 11 overall, his speed would be at the top. It makes him an uncommon quarterback for a franchise so starved for athleticism at the...
NFL・13 DAYS AGO
The Spun

The third NFL start for Chicago Bears quarterback Justin Fields hit a snag when he briefly left yesterday’s game against the Las Vegas Raiders with a knee injury. But the latest update appears to bode well. According to NFL insider Tom Pelissero, Fields underwent tests for what was called a...
NFL・9 DAYS AGO
Chicago Sun-Times

Bears coach Matt Nagy: Forget all that other stuff I said. Justin Fields is our starting QB!

I don’t pretend to understand how the Bears think, in the way I don’t pretend to understand how a cantaloupe thinks. So I can’t tell you how coach Matt Nagy went from telling us a few days ago that Andy Dalton is the team’s starting quarterback to telling us Wednesday that, no, strike that, Justin Fields is the starting quarterback, now and forever, amen.
NFL・14 DAYS AGO
Chicago Tribune

‘This is Justin’s time. Let him grow.’ What Justin Fields’ QB promotion and Matt Nagy’s sudden 180 mean for the Chicago Bears in 2021 — and beyond.

Matt Nagy made the landmark decision at some point Tuesday. Justin Fields would remain the Chicago Bears starting quarterback. Not only for their game Sunday against the Las Vegas Raiders and not just until veteran Andy Dalton was fully healthy again. Fields will be the top dog full time. For the rest of the season and beyond. No turning back. Nagy shared that news with his quarterbacks ...
NFL・13 DAYS AGO

The wait for rookie Justin Fields to become the Bears’ starting quarterback was brutal. He took over in Week 3, nearly a year ahead of the Bears’ original plan, but it felt like a century. So after coach Matt Nagy made the move permanent, rather than an interim position until...
NFL・11 DAYS AGO
Chicago Sun-Times

Bears QB Justin Fields getting an education after college

Start with this: Justin Fields ain’t running the 40 in 4.4 anymore. A hyperextended left knee (suffered in the second quarter of the Bears’ 20-9 victory Sunday against the Raiders) will do that to a sprinter. Getting a helmet and shoulder pads plunged into your side by a flying safety...
NFL・8 DAYS AGO
ESPN

LAS VEGAS — A big contingent of Chicago Bears fans arrived in Las Vegas this weekend, and they made their presence known Sunday at Allegiant Stadium as Raiders quarterback Derek Carr took the snap on fourth-and-5 late in the fourth quarter. Chants of “Let’s go Bears!” rose above the roar,...
NFL・10 DAYS AGO

Justin Fields is confused why refs didn’t throw a flag on the play that became a momentum-killing interception. ‘I need to be better,’ the Chicago Bears QB says.

Justin Fields saw Green Bay Packers nose tackle Kenny Clark jump before the ball was snapped late in the first quarter Sunday at Soldier Field and prepared to take a shot on what he assumed was a free play. Fields moved to his right and ripped a deep pass well over Allen Robinson and into the end zone, where Packers safety Darnell Savage wrapped his arms around the football as he tumbled to ...
NFL・2 DAYS AGO
Chicago Sun-Times

One of Bears rookie quarterback Justin Fields’ best assets is his scrambling ability — not necessarily to take off running, but to roll away from a crowded pocket and buy time for a downfield shot. Those are precious opportunities for a team with a wide receiver corps it considers the fastest in the NFL.
NFL・1 DAY AGO
Sportsnaut

The Pittsburgh Steelers lost to the Green Bay Packers 27-17 on Sunday to drop to 1-3, and things look bleak in the Steel City. One thing is clear from the first four weeks of the season, Ben Roethlisberger is toast. It's time for Big Ben to hang 'em up. Roethlisberger...
NFL・16 DAYS AGO