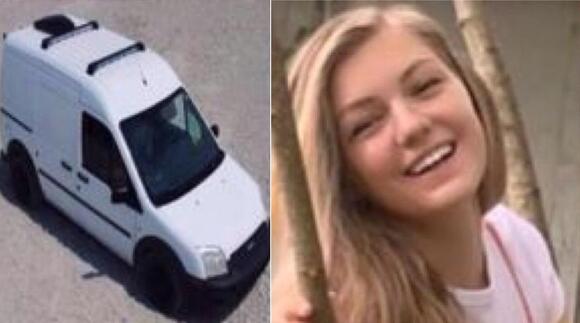 NORTH PORT, Fla. — Police are investigating the disappearance of 22-year-old Gabrielle Petito after her boyfriend returned from a cross-country road trip without her.

Petito and her boyfriend, Brian Laundrie, set out on a cross-country road trip in early July. The couple drove their Ford Transit van from Florida to New York and then drove west. The pair planned on stopping at several national parks along the way, according to WFSB. The cross-country journey was supposed to end in Portland, Oregon.

Petito’s mother, Nicole Schmidt, told WABC that she last spoke to her daughter when she was in Grand Teton National Park in Wyoming. Schmidt said she communicated using text messages to Petito’s phone the following days, but said she was unsure she was talking to her daughter.

“The first couple of days, though I wasn’t getting responses, I believed she was in a place with no service. It was like day eight or nine when I really became concerned,” Schmidt told WLNY.

Police in Utah told Fox News that an incident occurred involving the couple on Aug. 12, a few weeks before Petito disappeared. Police said the incident was reported by a third party.

“Our officers did respond to an incident involving Brian Laundrie and Gabrielle Petito on 12 August 2021 however, neither Brian or Gabrielle were the reporting party. Officers conducted an investigation and determined that insufficient evidence existed to justify criminal charges,” Moab Chief of Police Bret Edge told Fox News.

Laundrie has since returned to Florida with the van but without Petito, police told WTVT.

Police and Petito’s family told WLNY that Laundrie is refusing to talk to law enforcement and has hired an attorney.

Both Petito’s family and attorneys for Laundrie have released statements following the disappearance of the 22-year-old:

Laundrie has not been charged with a crime but has been named a person of interest according to WTSP.

The van has been seized as part of the investigation.

CAMPTON, Ky. — A 4-year-old boy who took a terrifying tumble off a Kentucky cliff on Friday emerged miraculously unharmed, rescue crews confirmed via social media. “Incredibly, while the child was certainly scraped up and bruised, he appeared to be otherwise okay. He was very talkative, and very interested in super heroes,” the Wolfe County Search & Rescue Team posted on its Facebook page, noting that he fell 70 feet, striking multiple ledges along the way.
KENTUCKY STATE・12 HOURS AGO
WSOC Charlotte

MATTHEWS, N.C. — Matthews police are asking for help finding a missing 17-year-old. Makenzie Ann LeGrande was last seen Sunday at 1 a.m. She was walking in the area of Oscar Drive, near the intersection of Idlewild Road and Matthews-Mint Hill Road. [ ALSO READ: Elderly man reported missing in...
MATTHEWS, NC・8 HOURS AGO
WSOC Charlotte

CHICAGO — (AP) — A former Chicago college student was convicted Monday of attempting to provide material support to the Islamic State group. Thomas Osadzinski, 22, designed a computer code to help IS bypass programs designed to block the group's propaganda, prosecutors said. The former DePaul University student, who was born in a Chicago suburb, was living in the city when he was arrested in 2019 during an FBI sting. He faces up to 20 years in prison.
CHICAGO, IL・16 HOURS AGO

PORTLAND, Ore. — (AP) — It was nearly last call on a Friday when Jacob Eli Knight Vasquez went to get a drink across the street from the tavern where he worked in northwest Portland — an area with a thriving dining scene, where citygoers enjoy laid-back eateries, international cuisines and cozy cafés.
OREGON STATE・5 HOURS AGO
WSOC Charlotte

Sinclair Broadcast Group, which operates dozens of TV stations across the U.S., said Monday that some of its servers and work stations were encrypted with ransomware and that data was stolen from its network. The company said it started investigating Saturday and on Sunday it found that some of its...
PUBLIC SAFETY・16 HOURS AGO
WSOC Charlotte

Protest strike shuts down Haiti amid search for missionaries

PORT-AU-PRINCE, Haiti — (AP) — A protest strike shuttered businesses, schools and public transportation in a new blow to Haiti's anemic economy, and unions and other groups vowed to continue the shutdown Tuesday in anger over worsening crime as authorities try to rescue 17 kidnapped members of a U.S.-based missionary group.
PROTESTS・5 HOURS AGO
WSOC Charlotte

HONOLULU — (AP) — Honolulu police officers and officials with Hawaii’s public school system discriminated against a disabled Black child by handcuffing, arresting and interrogating the 10-year-old girl for a “run-of-the-mill” dispute between children, the American Civil Liberties Union of Hawaii said. The ACLU sent a letter Monday to the...
HAWAII STATE・10 HOURS AGO