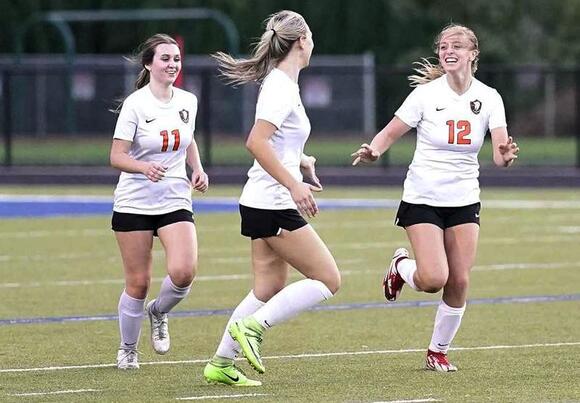 Grim accounts for all three goals as Gladiators beat No. 4 Valiants on the road.

In a battle of Class 4A giants, Gladstone junior Rhyli Grim stepped up to lift the Gladiators to victory.

Grim scored twice in the first half and once in the second half for the visiting Gladiators, who improved to 3-0. The Valiants, coming off a 0-0 tie last week against No. 6 North Marion, slipped to 2-1-1.

"They were probably the most skilled team we've faced," Gladstone coach Tyler Lewis said. "And they're certainly the best defensive team that we've played in a while."

The 5-foot-6 Grim blasted a volley into the upper left corner of the goal in the 10th minute, took a through ball and slid it past the VC goalkeeper in the 31st minute, then converted a corner kick by senior Alyn DeVeny in the 50th minute. Grim, who scored 16 goals in the 10-game 2021 spring season, has seven of Gladstone's 13 goals this season.

In any case, the Gladiators know how effective Grim is and work to get her the ball.

"Our main goal is to get her outside and look to get some isolation there," Lewis said.

Grim's efforts have helped fill the void left by the graduation of forward Brianna Lewis, who scored 17 goals in the spring before heading off to college at Oregon Tech.

Gladstone returns all but two starters from the spring, when it finished 8-2 and lost to Philomath in the quarterfinals of the 4A Showcase. The Gladiators feature three first-team Tri-Valley Conference first-team picks in Grim, junior midfielder Delaney McNett and junior goalkeeper Emersyn Stepp.

Grim said that the Gladiators "have grown a lot" since the spring.

Gladstone got a big home win Sept. 9 when it defeated No. 5 Philomath 3-1, avenging its 2-1 loss from the spring.

"They definitely had that one marked on the schedule," Tyler Lewis said of his players. "It was frustrating last year because they felt they were good enough. On our good days, we felt like we were one of the best teams, so we felt like we gave one away. It was a little bit disappointing."

Said Grim: "Us getting beat by Philomath made us really motivated to beat them. I hope if we meet them in the playoffs, we can do the same thing, take them out."

Valley Catholic finished 9-0 in the spring -- outscoring opponents 35-0 -- but opted not to participate in the 4A Showcase.

The Hawks compete against some of the state's best at Grant High School on Wednesday.With the biggest meet of the year just a week ahead, the Nelson cross country teams tested themselves against some of the state's best. The Hawks ran in the PIL/MHC Crossover meet at Grant High School on Wednesday, Oct. 20, facing off against two other Mt. Hood Conference schools and three from the Portland Interscholastic League. "With the split of schools, seniors were able to choose to stay at Clackamas (High School) this year so we don't have any seniors on our varsity squads," said Nelson...
CLACKAMAS, OR・2 DAYS AGO
Clackamas Review

Check out this slideshow of the best images from the MHC/PIL girls cross country meet.Big contests make for big results, lifelong memories and — hopefully — great photos. So here's a slideshow of the best images from the Mt. Hood Conference/Portland Interscholastic League girls cross country meet at Grant High School on Wednesday, Oct. 20. Click anywhere to enter the slideshow, then scroll down and click on any image to enter fullscreen. To buy an image or print from this event, go to milesvance.smugmug.com. Contact Sports Editor Miles Vance at 503-330-0127 or milesv@pamplinmedia.com. {loadposition sub-article-01}
PORTLAND, OR・3 DAYS AGO
Clackamas Review

The Kingsmen take a three-score lead at the half and just keep going to beat the Falcons.The conditions were perfect for the La Salle football team's Friday, Oct. 15, game with Putnam. There were clear skies with the sunset on the horizon and the bright lights of the Falcons' stadium shining down. But the Kingsmen were in no mood to be polite guests. Putnam raced out to a three-touchdown lead at halftime and used its fast start to beat La Salle 42-14 at La Salle High School. "It felt really good to dominate this game," said Putnam quarterback Konnor Bickford,...
5 DAYS AGO

Want to know what's happening in Clackamas County sports? Here's what happened last week.Clackamas County is a big, vibrant place with lots of great high schools and lots of great sports teams. Here's a look back at what happened in high school sports last week. Click on any of the blue headlines below to link to the stories. • Unbeaten Lake Oswego boys water polo wins again, beats Newberg 11-7 • Check out this slideshow of the best images from the Lake Oswego boys water polo team's win over Newberg. • Gladstone girls soccer posts key 3-1 win over North...
5 DAYS AGO
Clackamas Review

The Cavaliers are big, experienced and deep - and they're also unbeaten in 2021.You've read about the quarterbacks. You've perused the gaudy statistics from the running backs. You've seen the spectacular catches by the wide receivers. The 2021 Clackamas football team has produced all of those in droves while racing out to a 6-0 record in the Mt. Hood Conference and a 8-0 mark overall, and while rising to fifth in the latest Class 6A coaches poll and ninth in the OSAA power rankings. But guess what? Without the big guys up front, without the hard work of the offensive...
5 DAYS AGO
Clackamas Review

The Cavaliers use big plays to build a 28-0 halftime lead, then coast home to win again.Big contests make for big results, lifelong memories and — hopefully — great photos. So here's a slideshow of the best images from the Clackamas football team's 28-0 win over Barlow at Barlow High School on Friday, Oct. 15. Click anywhere to enter the slideshow, then scroll down and click on any image to enter fullscreen. To buy an image or print from this event, go to milesvance.smugmug.com. Contact Sports Editor Miles Vance at 503-330-0127 or milesv@pamplinmedia.com. {loadposition sub-article-01}
8 DAYS AGO

The victory sets the stage for what the Glads hope will be a 2021 TVC championship.Two of the state's best teams. Two different styles. Huge momentum swings, a revenge motive, the season's biggest goals and a recovery from COVID-19. Indeed, the Thursday, Oct. 14, matchup between the Gladstone and North Marion girls soccer teams seemed to have it all. In the end, the top-ranked Gladiators broke open a scoreless tie with three second-half goals, then withstood a furious rally by the second-ranked Huskies to win 3-1 at Gladstone High School. "It's very exciting," said Gladstone junior midfielder/forward Rhyli Grim, who...
9 DAYS AGO
Clackamas Review

The Gladiators test themselves against a big and talented field at Estacada.There's never a bad time to test yourself against the best, so that's just what the Gladstone boys cross country team did Wednesday, Oct. 13. The Gladiators ran to a sixth-place finish in the field of eight teams at the Estacada Invite at McIver Park, their efforts led by junior Paxton Hummel and his eighth-place finish among 53 runners. "I feel tired, but I beat my previous record by three seconds," Hummel said. "I was in the top 10 the whole time. I'm really impressed with myself for being...
9 DAYS AGO
Clackamas Review

The Gladiators come from behind to win in Prineville, edge closer to playoff position.It's not how you start, it's how you finish. Just ask the Gladstone football team. The Gladiators fell behind early in their Friday, Oct. 15, game at Crook County High School in Prineville, but finished strong to win 21-15 at Ward Rhoden Stadium. "It's a long trip on the bus up here and they are a great football team," Gladstone coach Cam Sommer said. "They play so hard. They kind of hit us in the mouth early and we told our kids they are going to do...
7 DAYS AGO

The Cavaliers aren't at their best, but still win easily on the road in the MHC.The Clackamas football team was not at its best Friday, Oct. 15. The Cavaliers were admittedly "sloppy," turned the ball over three times and didn't score in the second half. But it's a measure of just how good the 2021 Clackamas football team is — the Cavaliers are fifth in the latest Class 6A coaches poll and ninth in the OSAA power rankings — that Clackamas still won 28-0 over Barlow at Barlow High School and was never threatened. "It was sloppy," said Clackamas senior...
8 DAYS AGO
Clackamas Review

Check out additional highlights from Clackamas County's varsity football teams.The Highlights • Avirey Durdahl: Avirey Durdahl, a freshman quarterback on the Nelson football team, helped lift the first-year Hawks to their second straight win on Thursday, Oct. 7, a 28-7 victory over Reynolds at Nelson High School. In Nelson's win, Durdahl completed 11 of 16 passes for 194 yards with four touchdowns and one interception. • Gus Donnerberg: Gus Donnerberg, a sophomore tight end on the West Linn football team, made just three catches in his team's 28-27 win at Lakeridge on Friday, Oct. 8, but Donnerberg made them count...
12 DAYS AGO
Clackamas Review

The Mustangs start slowly, then begin to find themselves in the game's second half.The sky absolutely opened up at the start of the Milwaukie vs. Scappoose girls soccer game on Wednesday, Oct. 6. And then the Indians did the same to the Mustangs. Scappoose got its first goal in the game's opening 10 minutes, led by two at halftime, then poured across five more in the second half to beat youthful Milwaukie — which features 10 freshmen and sophomores — 7-0 at Chinook Field in Scappoose. "This was our first league game so we were trying to come out strong...
16 DAYS AGO
Clackamas Review

Cavs rout non-league foe Grant after Centennial forfeits their scheduled MHC game.The Clackamas football team may not have started quickly in its latest game, but the Cavaliers made darn sure to finish that way. Grant jumped out to an early lead in the two teams' non-league contest on Thursday, Oct. 7 —after Centennial forfeited their scheduled Mt. Hood Conference game against the Cavaliers — but Clackamas took over from there, pulling away to win 48-14 at Franklin High School. "I was really happy to see our guys deal with some adversity in the first half and then show up and...
15 DAYS AGO
Clackamas Review

Vance: Looking ahead to the red-letter days of high school football

There are a ton of huge games still to be played in the TRL, MHC and NWOC seasons.We are now a month into the fall season so it's time to take stock of where things stand. In football, this much is clear — the Three Rivers League is having a phenomenal season and can rightly lay claim to the mantle of Oregon's best league. Following Week 5 of the high school football season, the TRL features three unbeaten teams, that group including Lake Oswego, Lakeridge and Tualatin — all at 5-0. In the OSAA power rankings — which evolve...
18 DAYS AGO
Clackamas Review

The Hawks are making their first year a keeper, currently challenging for the MHC lead.They're making some noise over at Nelson. "They," in this case, are the members of the first-year Nelson volleyball team at the new Happy Valley high school. And as for the noise, the Hawks have practically shouted their arrival in Mt. Hood Conference play, racing out to a 9-1 league record and giving conference-leading Central Catholic a run for its money. Nelson proved itself again on Thursday, Sept. 30, coming back from a slow start to accelerate past Sandy 25-21, 25-10 and 25-13 at Nelson High...
22 DAYS AGO
Clackamas Review