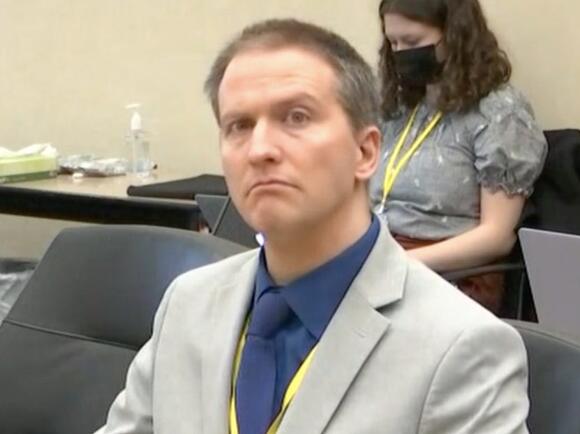 Minnesota's top court overturned a murder conviction Wednesday for former Minneapolis police officer Mohamed Noor, who was found guilty of murder and manslaughter in the killing of Justine Ruszczyk in 2017.

The ruling could have consequences for Derek Chauvin, the former Minneapolis police officer convicted in April of killing George Floyd.

Noor was first charged with third-degree murder and second-degree manslaughter in 2018, months after Ruszczyk's death . Ruszczyk, an Australian-American woman living in Minneapolis in 2017, had called 911 to report a possible sexual assault near her home. Noor, who later testified that he was startled by a sound while responding to the call, shot through his patrol car's window and killed Ruszczyk.

A jury found Noor guilty on both the murder and manslaughter charges in 2019. Noor was sentenced to 12 1/2 years on the murder count, but the judge did not sentence him on the manslaughter count. The city of Minneapolis separately paid Ruszczyk's family $20 million in a settlement .

In its opinion issued Wednesday , the Minnesota Supreme Court found that Noor didn't kill Ruszczyk with the "mental state necessary for depraved-mind murder" and that the evidence was "insufficient to sustain his conviction" on the murder charge.

The court ordered a Minnesota district court to sentence Noor on the third-degree manslaughter count instead. According to the Associated Press , the presumptive sentence for Noor on the manslaughter count - which Noor did not challenge in his appeal - would be four years, and allow him to be eligible for supervised release before the end of 2021.

Wednesday's state Supreme Court ruling now gives Chauvin an opening to challenge his third-degree murder conviction in the courts. But in order to challenge his entire 22 1/2 years sentence, Chauvin would have to successfully overturn the second-degree murder conviction, which carries the most severe sentence. Legal experts told the Associated Press that such an appeal would have slim chances of success.

However, the ruling may limit additional charges against Chauvin's police colleagues who were present during Floyd's killing. Prosecutors accused Thomas Lane, J. Kueng, Tou Thao of aiding and abetting second-degree murder and manslaughter, and had considered adding a charge of aiding and abetting third-degree murder as well. Prosecutors are now less likely to add the additional charge, according to the Associated Press.

Lane, Keung, and Thao all pleaded not guilty to the charges against them and are expected to go to trial in March 2022.

Chauvin could've gotten up at any time. He chose to press the life out of a man who was cuffed and no longer a threat to anyone. even being filmed didn't change his mind, so he was convicted for his decision.

If we were all Americans and nothing else, this would be a wonderful country.But, we are black, white, Hispanic, Asian and everything else but brotherly and sisterly.

Time to let Chauvin out early then. A knee on the neck of someone overdosing already seems like it was more of an accident then what Noor did.

Carl Cavalier, a Black state trooper in Louisiana, could face retribution for his criticism following the 2019 police killing of Ronald Greene.
LOUISIANA STATE・19 HOURS AGO
Insider

Parkland shooter will plead guilty in Florida high school massacre, his lawyers say. A jury will decide whether he faces the death penalty.

Nikolas Cruz was charged with killing 17 people and injuring 17 others at the Marjorie Stoneman Douglas High School shooting in February 2018.
FLORIDA STATE・1 DAY AGO
Insider

After Michael Hetle fired a seventh and final shot into Javon Prather's body, he turned to Prather's wife and asked, "You want it too?"
MUSIC・3 HOURS AGO
Insider

Video shows officer slamming a Black woman to the ground by her braids, which a witness said he tore out of her scalp

Shantel Arnold stands at 4'8", weighs 100 pounds, and has a missing eye from a car accident from years ago.
HOUSTON, TX・2 HOURS AGO

A 25-year-old woman with a baseball bat was arrested after she 'became combative' with Capitol Police and bit an officer, police say

After the confrontation, pictures show a bag was placed over the woman's head as she was taken away on a stretcher.
PUBLIC SAFETY・6 HOURS AGO
Insider

Authorities are still searching for Brian Laundrie, the fiance of Gabby Petito, who vanished last month. Laundrie hasn't been charged in her death.
MELBOURNE, FL・3 HOURS AGO
Insider

Extreme misogynist incels are pledging support for Brian Laundrie, Gabby Petito's missing boyfriend and person of interest in her murder

The so-called manosphere supports Brain Laundrie, the boyfriend of Gabby Petito, who is a person of interest in her death.
NORTH PORT, FL・11 HOURS AGO