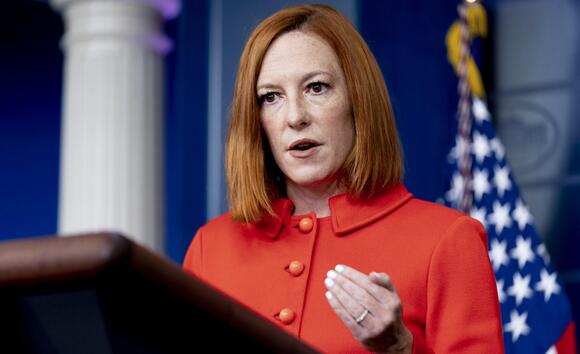 The White House did not directly answer questions from reporters on Wednesday about the casualties resulting from President Joe Biden's Afghan drone strike.

"How much confidence in which aspect?" Psaki responded, prompting Zeleny to reiterate whether Biden is confident that "the drone strikes killed the targets that were intended to be, ISIS fighters as opposed to innocent victims on the street" and if the president would "take responsibility if the innocent people were killed."

"Well, first, there is an investigation that's ongoing, as there always is in any event of drone strikes that could have impacted innocent civilians, and the United States takes incredibly seriously our role in preventing civilian casualties, whenever we possibly can," Psaki responded. "So I'm going to let that play out. The president also takes that responsibility incredibly seriously."

Secretary of State Antony Blinken testified before both Senate and House committees earlier in the week, during which he admitted the U.S. is not 100% aware of the identities of the casualties from the strikes.

Blinken was asked by Kentucky Republican Sen. Rand Paul if the target was an "aid worker or an ISIS-K operative," prompting the secretary to answer flatly, "I don't know."

You can watch Wednesday's entire briefing below.

The Biden administration has caused incalculable damage to the nation over the course of this still-ongoing fiasco. The very least we can ask of them is to quit lying about what’s really going on

Just blame trump like you always do… Democrats never do anything bad or wrong.. just ask them…. The go directly to blaming trump… this is our configured society.

We are lucky as hell not to be under Chinese rule right now. We have a general who was more loyal to his Chinese soldier buddy than the president of the USA. Everything he can do to give China advantage he is doing as fast as possible - he knows his time is short.

The nation’s supply chain woes have become a punchline for the White House, even as President Joe Biden moves to address the delays slowing the availability of goods nationwide.
POTUS・12 HOURS AGO
WashingtonExaminer

Jayapal hails Biden as 'mediator in chief' after spending talks

Rep. Pramila Jayapal voiced high praise of President Joe Biden after she and other progressive Democrats met with him at the White House on Tuesday to discuss the infrastructure bill and reconciliation package.
WASHINGTON, DC・9 HOURS AGO
WashingtonExaminer

The White House spent the day before Rahm Emanuel's Senate confirmation hearing defending him as its nominee to become U.S. ambassador to Japan.
FOREIGN POLICY・12 HOURS AGO
Fox News

Transportation Secretary Pete Buttigieg’s claim that the U.S. supply chain was only strained because of President Joe Biden's success in guiding the country out of a recession raised plenty of eyebrows on Sunday. The U.S. supply chain crisis has affected Americans of all stripes, despite White House chief of staff...
POTUS・1 DAY AGO

Sen. Tom Cotton, R-Ark., told "America Reports" Tuesday that the Biden administration is attempting to "hide the consequences" of the president's open border policy because they know it is a "political disaster." TOM COTTON: The obvious reason why they’re flying these migrants across the country in the dead of night...
U.S. POLITICS・13 HOURS AGO
Washington Examiner

Biden's botched Afghanistan withdrawal keeps getting worse all the time

President Joe Biden and his administration assured us that they “planned for every contingency” in withdrawing from Afghanistan. Revisiting the latest news on that front, that claim remains laughable. The Wall Street Journal reports that Afghan families are now literally selling their children in order to repay debts. Afghanistan’s economy...
POTUS・4 HOURS AGO
Reason.com

The Biden White House Is Lying About the Democrats' Spending Bill

Bernie Sanders wants better press coverage of the Build Back Better bill? Ask and you shall receive, Sanders. Matt Welch, Katherine Mangu-Ward, Peter Suderman, and Nick Gillespie detail the most egregious parts of this giant pile of potential spending. Plus we talk about the Jones Act, all on this Monday's Reason Roundtable.
PRESIDENTIAL ELECTION・1 DAY AGO
NBC News

WASHINGTON — As the clock ticks with few signs of progress, the White House is holding a series of meetings this week to pressure Democrats to resolve their differences and reach a deal on President Joe Biden's sweeping economic policy bill. Biden met Monday with Rep. Pramila Jayapal, D-Wash., the...
PRESIDENTIAL ELECTION・23 HOURS AGO

President Joe Biden is leaning on Democrats to reach an agreement on a large social spending package and put something on his desk by the end of the month.
U.S. POLITICS・10 HOURS AGO
MSNBC

As part of its comprehensive investigation, the bipartisan House committee examining the Jan. 6 attack is seeking materials from the White House — not because the Biden administration bears responsibility for the insurrectionist riot, but because its predecessor does. As we've discussed, Donald Trump, eager to hide as much information...
POTUS・1 DAY AGO
FOX 40 News WICZ TV

A senior Pentagon official held a virtual meeting about a potential compensation payment for the family of Zamarai Ahmadi, an Afghan civilian who was one of 10 people killed in a US drone strike in late August, Pentagon press secretary John Kirby said in a statement Friday. The discussion, held...
MILITARY・4 DAYS AGO
The Guardian

The Pentagon has offered unspecified condolence payments to the family of 10 civilians who were killed in a botched US drone attack in Afghanistan in August during the final days before American troops withdrew from the country. The US defence department said it made a commitment that included offering “ex-gratia...
MILITARY・4 DAYS AGO

WASHINGTON, Oct 14 (Reuters) - White House press secretary Jen Psaki said on Thursday that U.S. President Joe Biden has yet to make a final decision on who to nominate to lead the Food and Drug administration. Multiple media reports have said Biden is focusing on former FDA commissioner Robert...
POTUS・5 DAYS AGO
Fox News

Former Director of the U.S. Office of Government Ethics Walter Shaub shared some constructive criticism on Wednesday for President Biden and his administration. Shaub commented on a clip of White House press secretary Jen Psaki responding to questions regarding Hunter Biden, President Joe Biden’s son, and his artwork. New York...
POTUS・6 DAYS AGO
The Independent

The Biden administration’s vaccine mandate for employers with more than 100 workers has been submitted to the White House Budget Office for a final review before it is published for public inspection, White House press secretary Jen Psaki said on Wednesday.On 9 September, President Joe Biden announced his intention to have the Occupational Safety and Health Agency – an agency under the auspices of the Department of Labour that regulates workplace safety – to issue an emergency regulation requiring entities with more than 100 employees to require that those employees be vaccinated against Covid-19 or undergo weekly testing for...
PHARMACEUTICALS・5 DAYS AGO
WashingtonExaminer

The White House's communications strategy of dismissing criticism regarding Hunter Biden is not deterring interest in the first son.
U.S. POLITICS・7 DAYS AGO

WASHINGTON (AP) — Members of the House on Tuesday pushed through a short-term increase to the nation’s debt limit, ensuring the federal government can continue fully paying its bills into December and temporarily averting an unprecedented default that would have decimated the economy. The $480 billion increase in the country’s...
CONGRESS & COURTS・6 DAYS AGO
Reuters

WASHINGTON, Oct 12 (Reuters) - President Joe Biden will host Kenyan President Uhuru Kenyatta for a meeting in Washington on Thursday as the White House weighs sanctions against parties to the conflict in a northern region of the neighboring East African country of Ethiopia. The meeting at the White House...
PRESIDENTIAL ELECTION・7 DAYS AGO