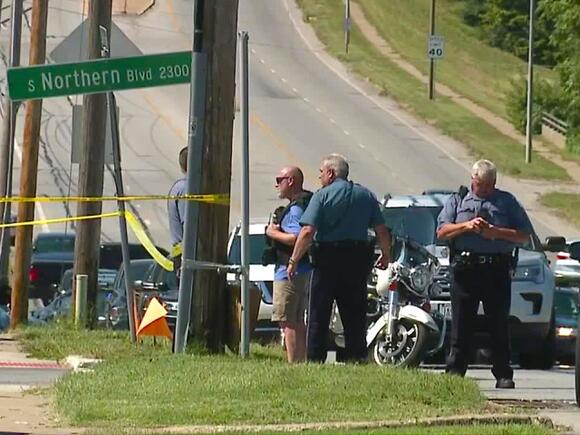 An Independence police officer was killed in a shooting Wednesday that also left the suspect dead, according to the Independence Police Department, Missouri State Highway Patrol.

IPD identified the officer who was shot as 22-year-old Blaize Madrid-Evans.

The shooting happened after two Independence officers responded to a call around 11:30 a.m. at a residence near East 23rd Street and Northern Boulevard, where they were met by a suspect who fired at the officers, according to MSHP spokesman Sgt. Andy Bell.

It's unclear what the nature of the initial call was, but it is believed to involve a party possibly wanted by law enforcement, Bell said. The exact nature of the tip remains under investigation.

The suspect, identified by MSHP as Cody L. Harrison, 33, of Gladstone, Missouri, shot Madrid-Evans with a handgun. Madrid-Evans was then transported to the hospital with serious injuries.

The second officer on the scene returned fire, striking and killing Harrison.

Police confirmed the address where the shooting happened to KSHB 41 News. Reporter Sarah Plake got a hold of the property owner, who had no idea anything happened.

"It's horrible, tragic," Steve Hauser the landlord of the home said. "Would have had no idea. As far as I know, no cops have ever been called there in the whole year I've had it."

Hauser confirmed he's owned the house for a little less than a year. He's renting it out to a single woman, who has been living there for about the same amount of time.

The tenant was arrested last weekend and is currently in jail in a separate case, so Hauser said no one else should have been at the house.

"What could have possibly went on? I just had the locks changed two days ago for the entire house and went through the entire house. I saw no evidence of anything," Hauser said.

When Hauser went back to the house on Monday to change the locks, he said two men were at the house, saying they were the tenant's friends. They said she was letting them stay there.

Hauser said he tried to call and message one of the men Wednesday morning to figure out the living situation, but no answer.

"I'd like to find out who did get shot," Hauser said. "I think I'll just sell the place. I'm done with the landlord deal here anyway."

It is unclear if either of those men are the suspect, or where exactly on the property the shooting happened.

Police officials said they were not aware of any ongoing search for additional suspects.

The Missouri State Highway Patrol will handle the investigation, which Bell said could take weeks or months to complete.

Independence Mayor Eileen Weir issued a statement honoring the injured officer and other members of law enforcement as well as first responders in general.

Every day the officers of the Independence Police Department put their lives on the line to protect the citizens of our community. We are ever hopeful that their daily interactions with the public will be peaceful so that they might return home to their families safely at the end of their shift. Today, that was not the case. At this time, our thoughts are with the officer, their family and the Independence Police Department. We know our citizens are already rallying behind the department and looking for ways to support them, but we encourage you to wait for further information.

To all of our officers and first responders, please know that we support you and honor the sacrifice you make to keep our community safe. Thank you for your service.

The Independence Police Department confirmed early Wednesday afternoon that it was investigating after an officer exchanged gunfire with a suspect in the area of East 23rd Street and Northern Boulevard.

Witnesses reported seeing officers run down the street in the area after hearing gunshots.

Agents from the Bureau of Alcohol, Tobacco, Firearms and Explosives also were spotted at the scene.

“ATF Agents responded to the shooting scene to provide any assistance needed,” local ATF Public Information Officer John Ham said. “Other than providing initial assistance, I do not anticipate we will have an active role in the investigation."

Kansas City, Missouri, police also responded to the scene due to an officer being shot.

"There's a lot of brothers and sisters in blue today providing any and resources they can," Bell said.

In a news conference Wednesday afternoon, a representative for the Kansas City, Missouri, Fraternal Order of Police said that peer support specialists are available to provide support to officers, whether they personally knew the injured officer or if this brings up "tragic moments in their own careers."

I was over there not long past noon. it was nuts seeing all that in independence. 20 years ago this was a decent city now it is trash everywhere. sad for the officer involved

Man arrested for shooting at Interstate 35 in Liberty

Police officers arrested a man early Friday after he allegedly fired shots at Interstate 35 in Liberty, Missouri, ran across the interstate and refused to surrender.
LIBERTY, MO・1 DAY AGO
KSHB 41 Action News

A Topeka man was sentenced Friday in Leavenworth County to 32 months for charges of aggravated battery, driving while a habitual violator and transporting an open container.
LEAVENWORTH COUNTY, KS・1 DAY AGO

A Leavenworth man pleaded guilty Friday to involuntary manslaughter after speeding while driving a stolen motorcycle and hitting a pedestrian who was attempting to cross the street and died from his injuries.
LEAVENWORTH, KS・1 DAY AGO
KSHB 41 Action News

Family angered by decision not to indict Platte Co man

Family members of two men shot and killed in February are angry at a jury's decision not to indict the man who killed them.
PLATTE COUNTY, MO・2 DAYS AGO

Pair of KCMO men charged with murder in March 2021 killings

One dead in Wednesday night shooting in KCMO

Teen dies of injuries in connection to weekend shooting

A teen died from his injuries Wednesday after being shot in a parking lot Saturday.
KANSAS CITY, MO・3 DAYS AGO
KSHB 41 Action News

Community urges people to speak up to help solve homicides

“That’s been the whole problem in this community, and in this city, people do not come forward or speak out on what’s going on or who is committing these crimes,” Temple said. “That’s why we need people to step up and speak out, and let’s get these people off our streets.”
KANSAS CITY, MO・2 DAYS AGO
KSHB 41 Action News

Jury cites 'stand your ground law' for lack of charges

A grand jury in Platte County failed to charge a man in the case of a shooting that left two men dead.
PLATTE COUNTY, MO・2 DAYS AGO
KSHB 41 Action News

A Lenexa man who has been missing since Oct. 2 was found dead on Tuesday.
LENEXA, KS・3 DAYS AGO