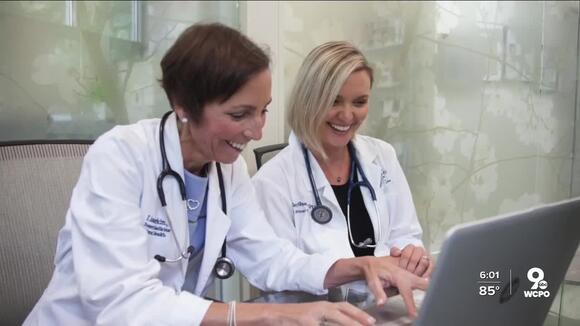 DeWine said the mandate drags the public focus away from science and into politics. It is a problem one Cincinnati doctor tackled with a head-turning policy of her own.

"I believe in this strongly enough that I'm willing to take the risk of a backlash," said Dr. Lisa Larkin.

Larkin instituted a policy of charging unvaccinated people $60 for a COVID-19 test each time they visit her office. Larkin's new policy has surprised a number of her patients.

Larkin said she instituted the policy in early August, the same week someone sued Forest Hills Schools over a board vote requiring masks and a Kentucky judge ruled Gov. Andy Beshear's mask mandate went too far.

There were also protests and rallies over vaccine mandates in Washington and California during the same time period.

"(I decided to) be a voice of reason and to advance what we know to be good medicine and good science and what's really the truth, which is vaccination is better," Larkin said.

Larkin's group of independent physicians first required all employees to get shots, then gave patients, families and visitors choices: Either bring proof of vaccination, pay for tests, use telehealth or leave.

Larkin said while some have left her practice, she's gained as many new patients as she has lost.

That has included a previously unvaccinated couple who changed their minds after one visit.

"I am sad always to lose patients but really feel the good about the fact if I had any positive impact about encouraging even those two people, and I hope it's more than that, to go and get vaccinated," Larkin said. "It's all about trying to do the right thing for patients. It's just become political, which is unfortunate."

Meanwhile, Gov. DeWine pleaded with people to boost vaccination rates in one of his latest press briefings.

"Please get vaccinated," DeWine said. "It means everything right now."

And administrators from Ohio's six hospitals for children report surges that are straining staff in unsustainable ways.

Cincinnati Children's Medical Center Hospital reportedly has more patients in intensive care on ventilators, crowding emergency rooms and in urgent cares than at any point during the pandemic.

And superintendents of local schools are requiring staff and students to wear masks while insisting vaccinating more of those eligible helps, too.

I'd say it's time to find a new Doctor trying to dictate a person's health choices. What kind of kickback and bonuses are gained for the tests?

It’s a pandemic how is dr trying to charge for covid test there free to get.if was concern bout catching covid 60 bucks says wasn’t that concered

good for her I just went to local urgent care for a cat bite an the PA told me she had people coming in knowing that they have covid and Not wearing a mask, she said I am probably going to get it again, health care workers are under incredible strain, we need to take precautions to prevent all around us from getting infected

The Cincinnati-based company cited a "lack of broad availability" of testing kits across the country.
CINCINNATI, OH・18 HOURS AGO
WCPO 9 Cincinnati

Marine Lt. Col. Stuart Scheller pleaded guilty to all charges against him at a special court martial trial on Thursday at Camp Lejeune, according to a report from the Military Times.
CINCINNATI, OH・1 DAY AGO
WCPO 9 Cincinnati

CINCINNATI — Cincinnati Public Schools announced at Monday's board meeting that 87 percent of the school staff has received at least one dose of the COVID-19 vaccine. The CPS Board of Education approved a staff vaccine mandate on Sept. 13. The district stated in a press release sent after the meeting that 408 district employees are newly vaccinated as a result of the policy.
CINCINNATI, OH・3 DAYS AGO
WCPO 9 Cincinnati

Mandel was speaking against Lakota school's mask policy, which was adopted in August.
EDUCATION・3 DAYS AGO

Across the country, companies have struggled to hire people as Kroger tries to push for more hires as people plan to fill carts ahead of the holidays.
CINCINNATI, OH・2 DAYS AGO
WCPO 9 Cincinnati

A second Warren County city could be declared a sanctuary city for the unborn.
WARREN COUNTY, OH・4 DAYS AGO
WCPO 9 Cincinnati

Overdose deaths among African American men have increased by nearly 17% this year, according to the Ohio Department of Health.
HAMILTON COUNTY, OH・9 DAYS AGO

Prosecutor doubts it will make a difference
BUTLER COUNTY, OH・9 DAYS AGO